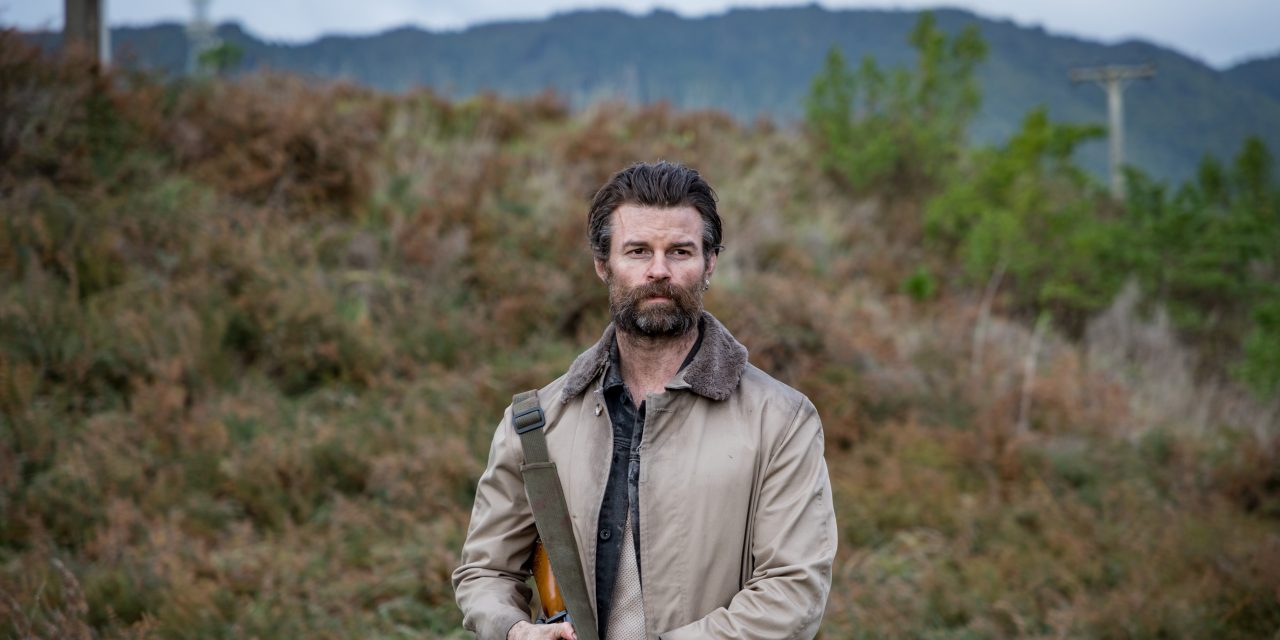 The story starts out simply enough when high school teacher Alan ‘Hoaggie’ Hoaganraad (Erik Thomson), his wife Jill (Miriama McDowell) and stepsons Maika and Jordon (Billie and Frankie Paratene) go exploring a serene and rocky valley in New Zealand. But the sudden and unexpected appearance of a pair of strangers propels the family into a terrifying road trip where they find themselves held hostage — in more ways than one — by the raffish Mandrake (Daniel Gillies) and his sombre accomplice Tubs (Matthias Luafutu). At first the family’s dread seems to be born of a random encounter with two men with evil in their hearts intent on who knows what and, early on at any rate, that intention seems to change from moment to moment. As the night drags on, however, Hoaggie and Jill realise that this nightmare has been set in motion 20 years earlier.

The stream of events take place over one afternoon and night and, as they approach their mysterious final destination, Mandrake reveals the horrible secret motivating his actions leaving Hoaggie to face a questionable past before sunrise.

It could have easily been just another one of those stories but this film is very well crafted and acted. Co-written and directed by James Ashcroft it is suspenseful and intense but the brutal scenes are never visually over-the-top and the dialogue is convincing. Its narrative is chronological with a straightforward linear progression. The fast-paced and staccato editing style reminded me of the first Mad Max movie (1979) — particularly the road scenes. All highlighted by John Gibson’s music with the fractured sounds of bowed piano and bass. The efficient use of reel time, where hardly a minute is wasted, contributes to the film’s momentum and escalation in tension.

In the film’s first eight minutes we see the family driving a highway in an SUV, bickering a little, particularly the two boys, stopping for supplies, arriving at their destination, walking up a path surrounded by a lovely mountainous landscape and then picnicking towards the top near a lake. They pose for a group photograph, but the atmosphere is ominous.

And then the two men suddenly appear. One says: ‘This is nice. Is this a family picnic?’ And a few moments later: ‘You’ve got the whole place to yourselves.’ The other says nothing. It’s obvious the talkative one is the leader. He introduces himself: ‘I’m Mandrake, I’m a magician. I make things disappear.’ Clearly this is not going to go well. We see a rifle appear from under the speaker’s long coat and hear him cock it. 12 minutes have now passed.

We immediately begin to imagine what might happen next. ‘When you look back, this will be the moment you’ll wish you’d done something’, says Mandrake coldly.’ And then what does happen is so surprising, so unexpected, that you wonder if it did happen. But it has. In one-and-a-half seconds the drama and tension have been stepped up several gears. We’re 18 minutes into the movie.

We are speeding away now in the family car with Tubs (speaking little but saying a lot with his eyes and facial expressions) and Mandrake at the wheel still talking, dispassionately commenting on everything — casually provocative, sardonic. ‘What do you think of that ol’ son’, he asks Hoaggie at least a couple of times.

Twenty-seven minutes in, still driving a dark road: ‘Sorry, I haven’t asked you what you do. Forgive me.’ We somehow feel Mandrake already knows and soon we know he does. School teacher, eh? Primary, secondary? And before that? Scotch College, and before? A home. What kind of home? An institution for boys? There it is. The ‘Home’ in the movie’s title perhaps? We now think we can see where this is going. We suspect the connection between Hoaggie and Mandrake was not random. A milestone reached.

And so all of us go hurtling into the long night wondering what more can happen. 53 minutes in: Hasn’t the worst happened already? Apparently not. More to come. How much more can we take? It will end badly — the drama in the soundtrack says so.

One hour, five minutes in. Mandrake’s been frustrated with the car’s non-functioning sound system for a while. Ah, there it is, finally music from the car radio:

Thy power throughout the universe displayed . . .

A big baritone voice is singing the words into the night sky at slow pace, rising to a crescendo. It’s an alarming and compelling juxtaposition. Makes it seem climactic but it’s a little too soon for that.

One hour, 14 minutes: ‘One more stop, then the pub’, I think I hear Mandrake say with a nod to Tubs. A CD is put in the car’s player. We hear familiar classical music at volume. (From Grieg’s Peer Gynt Suite.) ‘It’s amazing how music can lighten the load’, says Mandrake, but what we’re hearing is heavy, dramatic. The music ceases abruptly when we reach ‘home’ and the vehicle is switched off. ‘Come on ol’ son’, Mandrake coaxes Hoaggie, pulling him out of the car. This must be it, the climax! What will happen? Ten minutes to go.

Coming Home in the Dark is based on a 1995 short story by award-winning New Zealand author Owen Marshall. It’s a harrowing narrative exploring how a random act of violence can change a life forever.

The narrative went on to inspire an art show of the same name at Christchurch Art Gallery in 2004, exploring the underbelly of the region’s genteel reputation. It also caught the attention of the director who optioned the short story almost 10 years ago. ‘I want to tell a simple, terrifying and universal story: a seemingly respectable man’s past catches up to him . . .’ said Ashcroft. ‘It’s my hope that audiences will be divided over the film’s provocative and engaging characters; . . . [who] ask viewers to reflect on themselves. We need to understand our own brutality if we’re to make any notion of change to society.’

Coming Home in the Dark is a fast-moving thrilling film that goes beyond the genre; it’s a wild ride with lots of surprises supported by crisp dialogue, well-structured scenes and a satisfying mix of drama and high stakes.

Coming Home in the Dark

Coming Home in the Dark premiered at the Sundance Film Festival in early 2021 followed by its New Zealand theatrical release on 12 August.