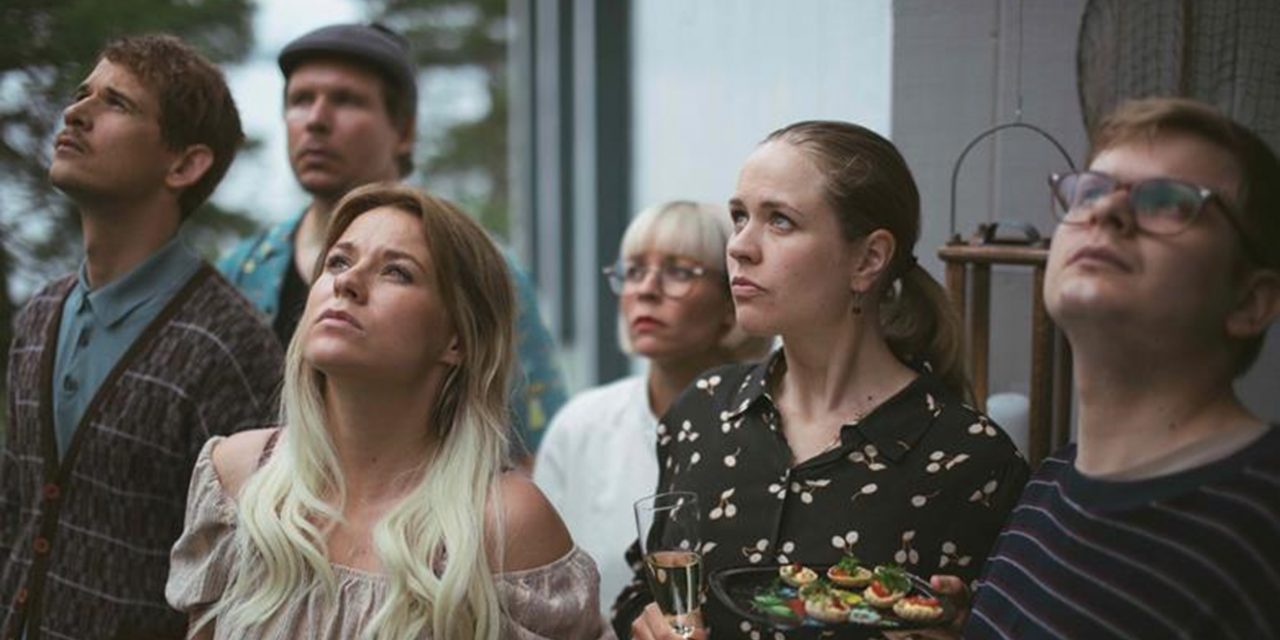 Messy. The best word to describe this film is ‘messy’.

Also known as ‘Seurapeli’, the Finnish film Games People Play was written and directed by Jenni Toivoniemi to show how complicated modern relationships can be, particularly with old friends.

When a group composed of four men and four women head to a gorgeous summer house for a birthday weekend, it is clear to see how caught up each character is on one another. Within five minutes you can tell that some major drama is about to go down. With most of these characters having known each other for over two decades, their romantic histories are tangled up like a bag of snakes.

Old partners are thrust together, ex lover’s are revealed and crushes once stifled are laid out in the open. Combine this with alcohol and an overwhelming lack of fulfilment in each character’s lives and you get the perfect recipe for a bloody great big mess.

It can make you cackle with laughter at some points and cringe in discomfort at others. Half the movie, you’re shouting at the screen for two characters to ‘just kiss already!’ and the other half you’re crying out: ‘don’t do it, you’re married! – you have a baby on the way! – you don’t really love them!’.

The film centres around a birthday party for Mitzi (Emmi Parviainen) who hides the fact that she’s getting divorced to appear more well-adjusted and adult to her mid-to-late-thirties friends. What she is not able to hide well however is that she does not want this party, reminding her of the one they had at this same location ten years prior, and another ten years before that. Though she’s perfectly content to drink her way through the weekend.

Most of the cast of characters around her have a history that is as complicated as Mitzi’s. For instance, she had previously had a ten year relationship with Juhana (Samuli Niittymäki) who is painfully hung up on her. As an author he famously wrote a book that demonstrates his obsession with her. Needless to say this does not go down well with his new girlfriend Ulla (Paula Vesala) who is new to the cult-like group and struggles to fit in with the gang.

Mitzi’s best friend Veronika (Laura Birn) arrives in style with her trophy boyfriend, a famous actor called Mikael (Christian Hillborg), though it quickly becomes apparent that his life and ambition is driving her life in a direction in which she does not wish to go. Stifled feelings and unspoken words make up the majority of the film’s drama and once that floodgate is opened, the water rises on a biblical scale. Secrets are unearthed, both innocuous and pivotal. Best friends fight. Mistakes are made. Wounds are reopened.

Ultimately the film ends on a strange note. You aren’t quite sure if everything is going to be alright. Some relationships are left on the path to joy and others are left in tatters. It’s an unconventional conclusion that leaves you feeling uncomfortable but overall it feels real.

Not all stories in life end happily ever after, not all messy weekends with old flames end without consequences, and certainly not all relationships can have their rifts mended.

Arguably the sweetest of all the messy partnerships is that between Veronika’s sister Natali (Iida-Maria Heinonen) and Janne (Paavo Kinnunen). Natali seems embarrassed by her secret relationship with the youngest member of the group and hides it from the rest of the gang, much to Janne’s dismay. Janne’s older brother, Härde (Eero Milonoff) functions as the classic wildcard who parties hard and speaks truths no-one else wants to hear.

Härde is a particularly interesting character in that he displays aspects of the trickster or player archetype, yet he brings to the group a certain wisdom, occasional maturity that surpasses everyone else’s and a distinct moment of self awareness concerning some of his sleazier habits. He completes the cast and is the source of a significant amount of the film’s humour, with Milonoff portraying the strange dichotomy of character conventions with aged thoughtfulness and youthful vigour.

Games People Play is a tragicomedy, filled with an impressively written cast of characters who immerse you in their performances. The cinematography focuses equally on close ups of character’s faces and long scenic shots of the beautiful seaside vista that geographically remains in a constant romantic sunset.

It’s a raw and honest film that fills you with laughter, discomfort and anguish all at once – particularly if you’ve ever felt the bitter sting of unrequited love, or tried to maintain a friendship with someone who’s broken your heart. Yet even when you want to look away, you can’t help but keep your eyes glued to the screen just to see what mess the next character will get themselves into.

Games People Play features at Palace Cinemas as part of the Scandinavian Film Festival which commenced in Brisbane on Friday 15 July.

Due to the recent lockdown (Sat 31 July – Sun 8 Aug) the Scandinavian Film Festival has been beeen rescheduled to 21 – 25 Aug.