Find your rainbow with Community Plus 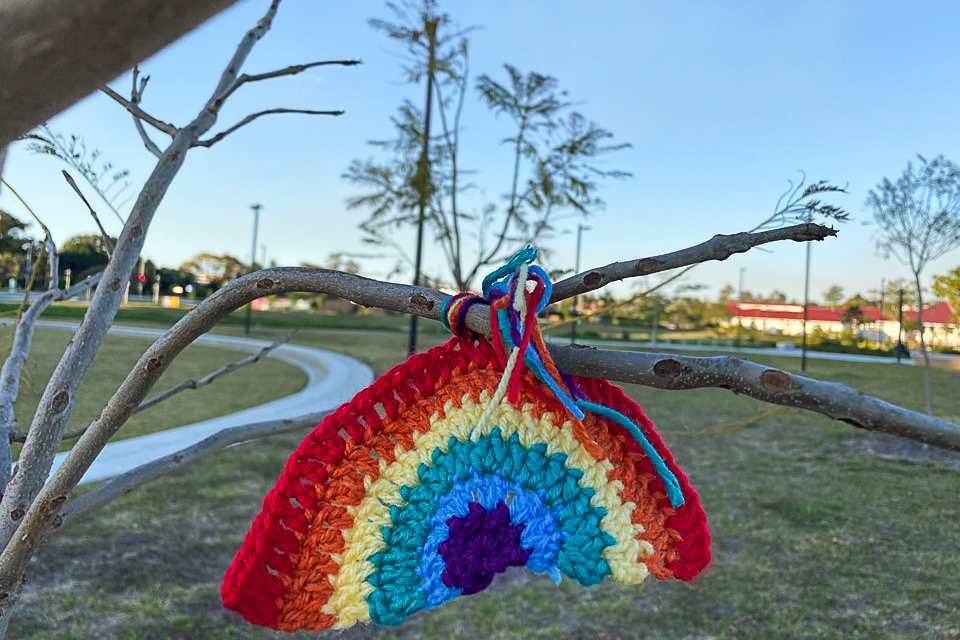 Melinda McInturff, Community Development Worker and craftivist crochet maker at Community Plus at Yeronga Community Centre, has found a way to combine her interests and to get the community out walking.

“We have done a lot of craftivism in our community: putting up flowers on light posts and on signposts around the neighbourhood and poppies for ANZAC Day. We put 1000 poppies out at the Cenotaph at Yeronga,”

Now, Melinda and her team are using crocheted rainbows to get people out and about in the community.

“There are lots of parks in Yeronga, lots of little pockets off walking tracks that people probably don’t even know exists.”

So, rainbows are hidden all over the neighbourhood to encourage people to get out and about, to increase their well-being, and in the process, to discover new part of the community.

“Rainbows are kind of hopeful. We put them in quirky places where people might not go, but they are still very publicly accessible.”

“Like our favourite fluff ball Harvey, you might find one of our rainbows wrapped around a lamppost, hanging on a tree or hedge or stuck on a signpost.” 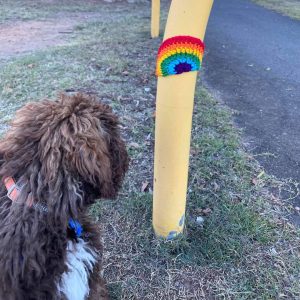 Community Plus is asking residents to find and photograph 10 rainbows and to post their images on social media. Local Councillor Nicole Johnson has donated a Coles Voucher for the competition winner.

“When you find a rainbow, take a selfie and share it on Instagram with the hashtag #communityplusqld or send it in a private message on Facebook, and we will share it with the community.”

If you find and take pictures of at least 10 rainbows, you get a  prize… your very own crochet rainbow.

The program will go right through to the end of the school holidays to 5 October.

Yeronga Community Centre are also coordinating the making of ear savers for nurses. The bands go behind the head and attach to face masks instead of behind the ears.

“We’ve already made 250 for the Queen Elizabeth 2 hospital. And there’s another 200 that will go to the PA this weekend.”

If anyone wants to be part of the project, they can get the pattern for the rainbow and make their own, or you can purchase the rainbows.

“We’re going to have some for sale here [at Yeronga] that people can come and buy one. We’ll have them available after the competition finishes.”

Melinda said the Yeronga craftivism program is also activating people to make the rainbows. The Brisbane Crochet Group meets at The Burrow in West End so check their website for details.

Yeronga Community Centre’s idea has been picked up in Toowoomba, so maybe it is something we could try in West End too.