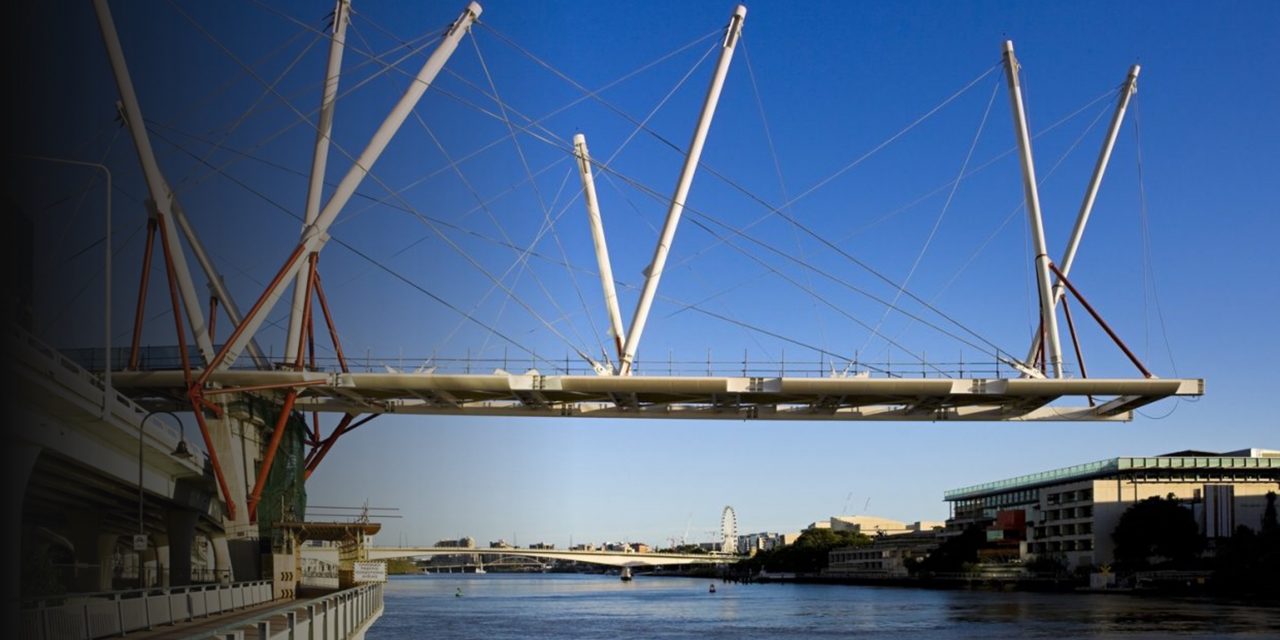 Many of us have wondered what transpired between the Premier and Lord Mayor on their flight to Tokyo after State Treasurer Cameron Dick refused to commit state funds to the Lord Mayor’s vision for five new green bridges last week.

“We’ve always said that contributions from the State and Federal governments will be necessary to complete the balance of the Green Bridges Program.”

However, by March 2020, City Council said it would proceed with two of the green bridges (at Kangaroo Point and Breakfast Creek) ahead of the delayed state and federal budgets.

The original plan included two West End bridges: one from Toowong to West End and the other from St Lucia to West End, along with bridges between Kangaroo Point and the city and at Breakfast Creek. However, the fifth bridge, from Bellbowrie to Wacol, was rejected by the community, and Council is considering other sites.

Many in the community may find it strange that the Lord Mayor would announce a $550 million project before speaking with his funding partners. Nevertheless, it appears that is precisely what has happened.

“I have not received any request from Brisbane City Council to fund inner-city bridges,” the Treasurer said.

“I’ll save them the trouble of asking because the answer is no.”

Hot on the heels of his election in May 2019, the incoming Lord Mayor, Adrian Schrinner, promised Brisbane five new green bridges. The bridges program has been emblematic of the Lord Mayor’s vision for Brisbane’s clean, green image.

The State Government claims Council has sufficient funds to proceed with the five bridges alone.

“Brisbane City Council is Queensland’s richest council and is getting richer, having just jacked up rates by 3.75%, more than double inflation,” Treasurer Cameron Dick said.

“Brisbane City Council didn’t even go into deficit during the pandemic, unlike state and federal governments, and has ample capacity in its balance sheet to fund inner-city infrastructure such as this.”

Councillor Murphy said the Treasurer’s comments make no sense given the Kangaroo Point Green Bridge is part of ongoing discussions for a South East Queensland city deal funded by all three levels of government.

“It is disappointing that State Labor would attempt to reject these sustainable and active travel initiatives,’ Cr Murphy said.

“This shows how dire the Queensland Government’s financial situation is becoming, given the Beattie and Bligh Governments delivered exactly this type of infrastructure a decade ago.”

“For comparison, the latest $1.4bn blow-out in Cross River Rail could fund the equivalent of seven Kangaroo Point Green Bridges.”

Labor Leader in Brisbane City Council, Jared Cassidy, has called Adrian Schrinner and the LNP “incompetent” and the bridges program “a media stunt”. He told the Westender that the promised green bridges are ‘crumbling at the hands of Adrian Schrinner’.

“This shows just how incompetent Adrian Schrinner and the LNP are. They rushed out promising to build five shiny bridges they could never afford and didn’t even have funding for as a pre-election media stunt.”

“Meanwhile, this LNP Council continues to neglect the most basic of suburban works.”

“We have over 1,000 broken footpaths in need of repair, we have over 6,000 streets without any footpath at all, and all this LNP Lord Mayor cares about is re-announcing green bridges he can’t afford.”

“If the LNP Council was serious about the bridges they announced, why haven’t they bothered to formally approach the state government for funding towards their half a billion-dollar plan…?”

“Our community wants action on active transport infrastructure, not buck-passing from the LNP,” Ms Butler said.

Jonathan Sri, Councillor for The Gabba, who is a supporter of the bridges program, posted on Facebook:

“Ever since Lord Mayor Adrian Schrinner announced out of the blue that he would build ‘5 new green bridges’, there have been legitimate questions about exactly where the money would come from”.

But Cr Sri said infrastructure projects should ‘probably’ be funded, at least in part, by State or Federal governments since they have more revenue-raising capacity than a local council.

“We wouldn’t be having these debates about which level of government pays for active transport infrastructure if we simply increased infrastructure charges to make developers pay their fair share towards the cost of local improvements,” Cr Sri told the Westender.

So, after engaging in consultation processes in good faith, what is the community to make of this political posturing?

In May 2021, following the second round of consultations on the West End bridges, the Lord Mayor revealed locations for the proposed landings to a mixed response from local community groups.

These responses align with the range of reactions to the Treasurer’s recent refusal to fund the bridges.

Elizabeth Handley of ParkIt in Toowong, who has long campaigned for a bridge from West End to the old ABC site on Coronation Drive, said:

“We would expect that the State Government and the Brisbane City Council would work together as adults to secure the best possible outcome for the people of Queensland. We are all very tired of the blame game and want to see cooperation and progress.”

It was something of a surprise to residents when, in June this year, the Lord Mayor ‘revealed’ the Kangaroo Point bridge will have an above-water boutique bar with restaurant, and event space.

Ms Handley said Council could remove this commercial component of the Kangaroo Point Bridge to fund the bridge from West End to Toowong.

Belinda Ward of Space for Cycling says her group expects that without funding from other levels of government, Brisbane City Council will be unlikely to proceed with the green bridges connecting West End to Toowong and St Lucia.

“This will be a shame for Brisbane, as these walking and cycling bridges will help connect our suburbs and make active transport trips safer, easier, and more convenient.”

“Two rounds of community consultation have demonstrated strong public support for these new connections, and Brisbane people on both sides of the river are looking forward to new opportunities to access employment, study, recreation, and entertainment.”

Ms Ward notes that Council could fund all of the bridges.

“They have already committed to 100% funding the bridge across Breakfast Creek and have made other major active transport investments like the Indooroopilly Riverwalk. They have an annual road budget of around a billion dollars, which is spent on things like road-resurfacing and intersection “upgrades” designed to make it easier for people to drive.”

“If only we could see similar levels of investment in making it easier for people not to drive; by making it more attractive to walk, cycle, and access public transport instead.”

Ms Ward says Space for Cycling is disappointed by what appears to be a lack of strategic city planning in Brisbane.

“The Lord Mayor and Premier are currently in Tokyo promoting Brisbane as an Olympic host city, and yet they don’t seem to have had a conversation about what investment they should be making to ensure we are the healthy, friendly, and welcoming city they are promoting as Brisbane 2032.”

“Brisbane residents value our outdoor and active lifestyle; we care about clean air, looking after the environment, and building strong communities.”

“We want governments of all levels to ensure that we and our children can continue to enjoy that lifestyle as the city grows.”

Andrew Demack, Director of Advocacy for Bicycle Queensland, told The Westender that the bridges program would make the city a better place to walk and ride a bike and benefit the whole society.

Mr Demack said State Government and Brisbane City Council have collaborated well on active transport infrastructure in the past and have good processes for doing so. Yet they appear to be playing politics on the green bridges program, which is disappointing.

He said the Federal Government has been shamefully absent from funding active transport infrastructure across the nation, not just in Queensland.

“We think that the Federal Government should help fund this program.”

While surprised that Council has not secured funding commitments much earlier, Friends of Guyatt Park and St Lucia Community Association have welcomed the impasse.

Deborah Scott of St Lucia Community Association (SLCA) told the Westender that in a recent letter to SLCA and Friends of Guyatt Park, the Deputy Premier advised that Council had not approached the State Government for funding.

“It was surprising to learn the Council should have got as far as it has down the planning path without so much as engaging formally with the State Government, an obvious source of supplementary funding.”

Ms Scott said SLCA has been protecting Guyatt Park since the University of Queensland first tried to build a bridge into the park, and that their current campaign is a continuation of that successful action.

The Friends of Guyatt Park group has vigorously opposed a bridge from Guyatt Park to West End. The group told The Westender it remains convinced that a bridge landing in Guyatt Park is “unnecessary, destructive of valuable green space, and does not solve local traffic problems”.

“We note that the Queensland Treasurer, Cameron Dick, this week has stated that the State Government has not been asked by the Brisbane City Council for supplementary funding for Green Bridges and would not provide it if asked.”

“We applaud the Treasurer’s decision and hope that wasting money and trashing green space by a bridge into Guyatt Park will now be forgotten. The Council needs supplementary finance, and we expect that, after the Treasurer’s statement, they will realise this will not be forthcoming.”

West End based Kurilpa Futures group said it is relieved that the current position of the State Government is to refuse to fund the program to build the West End Bridges and, in particular, the West End to St Lucia bridge.

“If the bridges are to proceed, State Government funding should be directed to the essential tasks of providing supporting infrastructure and, in particular, greenspace to at least compensate for losses incurred and active transport works to accommodate additional pedestrian and bike movements,” a Kurilpa Futures spokesperson said.

Kurilpa Futures said the current funding position provides an opportunity for Council to adopt a “no net loss position” or better. They said Council should seek agreement and funding to offset the inevitable loss of green space from the bridge landings, replace any mature trees lost, and upgrade cycling and walking infrastructure to accommodate projected increases in usage.

“We would be concerned if the commercial/tourist considerations apparent in the recent inclusion of a restaurant and bar in the Kangaroo Point green bridge also affected the design of the West End Bridges to the detriment of cyclist and pedestrian safety and general amenity.”

While Cr Murphy has reconfirmed that “if required”, Council will fully fund the Kangaroo Point and Breakfast Creek green bridges, he did not comment on whether this will be the case for the West End bridges. Council is drafting business cases for the two West End bridges, and Cr Murphy said when completed they will be made public and provided to State and Federal governments.