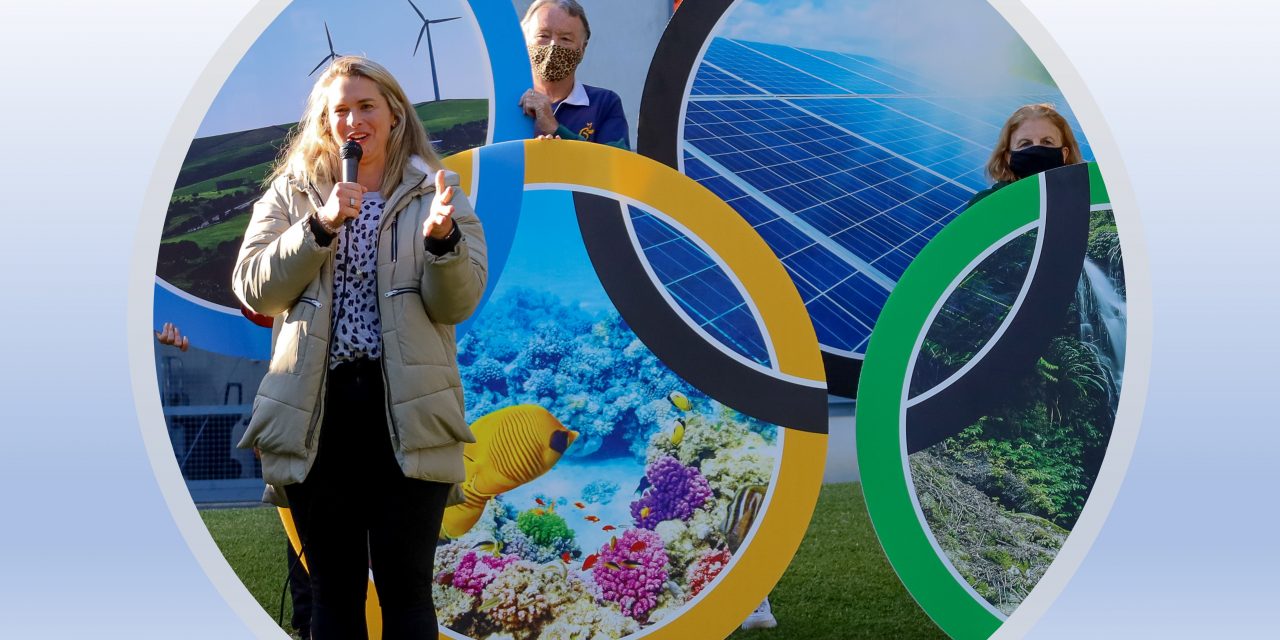 Four time Olympic gold medalist Libby Trickett braved the cold and joined the Queensland Conservation Council (QCC) this morning at the Woolloongabba Place Park to call on the Queensland Government to commit to 100% renewable energy before Brisbane hosts the Olympics in 2032.

Ms Trickett says that the Queensland Government has an important opportunity for Queensland to step up its renewable energy goals.

She hopes the Premier will announce from Tokyo today that Queensland will be the 2032 Olympic host.

“The idea of having the Olympics in Queensland would just be magic for me – to be able to share that with my girls and with my family and friends, would just be incredible – not only that but to share it with the world.”

“I’ve always been really passionate about climate change and the environment and taking care of the natural world. I think it’s so important to be able to do this and that’s where these two things come together – we want to make sure that we put our best foot forward and showcase our natural environment to the rest of the world during the Qlympics.”

“The motto of the Olympics is “faster, higher, stronger”. We think the Queensland Government should take inspiration from the spirit of the Olympic games, and set higher renewable energy targets, move faster away from fossil fuels to achieve 100% renewable energy generation for the whole of Queensland by 2030 in time for the 2032 Games. This would show a stronger commitment to action on climate change, and securing a safe climate for our future.”

“Queensland is one of the highest per capita emitters of carbon pollution in the world. How could we ask the world to come and celebrate with us if we haven’t even left the starting block on climate action?” Mr Copeman said.

“Climate change is the greatest threat to the Great Barrier which is about to be classified as “in danger” UNESCO. We must aim higher, move faster and make stronger commitments to ensure the tens of thousands of visitors coming to the Olympics are able to visit a Great Barrier Reef that still has a chance of survival.”

QCC is the state’s peak non-government environment group. It is making the case to Powerup Qld with a rapid transition to 100% renewable energy generation by 2030.