Going from hot to cold 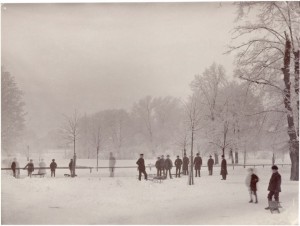 It was the last quarter of 2010 and I had almost given up on finding a job in Brisbane. We’d quit our jobs in The Netherlands and moved _Down Under_ in 2009.

The missus was sick of working in an office and couldn’t stand the office politics. Her plan was simple, head back to Australia and go back to university. Me? I’d never been to Australia, so I thought, another adventure I could add to my _school of life_ experience.

What I didn’t expect was that no-one seemed interested in hiring someone that had worked for several major companies. It was as if I had done nothing in my life.

I was told by a few locals the most likely reason for not giving me a fair go was because I wasn’t Aussie.

After a year of trying to find a job, probably applying for well over 500 jobs — maybe more. I lost count after half a year of pulling hair out of my head and swearing uncontrollably.

I ‘ve always enjoyed writing— telling a good yarn —and had an interest in journalism. So, why not have a crack at that I thought, nothing to lose, right?

After coming across the print edition of Westender I sent Kerrod Trott (the editor) a pitch for a short write-up. Lucky Duck café was hosting a graffiti contest. It was a local story that showcased what West End is famous for — diverse culture and art.

My clumsy attempt at writing a story about a graffiti contest got published.

Nothing boosts a journalist’s ego more than seeing your own byline in print. Apparently my effort was good enough that Kerrod told me I was welcome to contribute more write-ups if I wanted to.

About 50 years ago this would be enough to kick off a career in journalism. Start writing for a local rag and make your byline known. Unfortunately now, to get anywhere as a journalist, you also need at least a bachelor degree in journalism.

From 2011 to 2014 I became busy finishing my bachelor of journalism (specialised in history and international relations), studying full-time and writing primarily for Westender. I also ended up writing for, to only [mention a few](http://dokterw.me/portfolio/journalism) (and to name-drop a bit), Gonzo Times and Go Gonzo Journal.

Being a full-time student and spending most of my free time as a freelance journalist took its toll. So much I lived up to the stereotype as the journalist who is rarely sober. With that said, I stayed sober when I did the last edits on a write-up, but when I sat down to write I was not.

Going to media events where they provided us with alcohol I was like a child in a candy store. Drank, took notes, drank some more, maybe snapped a few photos, had more to drink and then stumbled home, sat down at my desk, transcribed my notes, had another drink and passed out when I went to bed.

It got to a point where a few beers or a few cocktails didn’t affect me at all — in the sense you couldn’t tell that I’d had a few serves of alcohol.

That I often felt most of the essays I had write to be a waste of time didn’t really help. I applied the same approach. Find a bunch of academic journals, get drunk, write and go to sleep. Then wake up to edit out the drunkenness and keep what made sense.

There’s nothing more soul crushing than writing something that seems like a waste of time. As in, that it adds nothing, other than an excuse for a lazy professor to have some kind of work to mark — even though they only wanted you to regurgitate academic sources and agree with them.

The time where academics are expected to analyse and question has passed. What matters now is to not have your own ideas. Only repeat what you are told in lectures and you’ll be fine. So if you’re planning to get a university degree, figure out what your professor wants to hear and go with that, even if it goes against all common sense and healthy scepticism.

Not to mention, if you plan to try your luck as a journalist, try to do what I did, get a writing gig with a local rag that has a editor willing with give you a fair go. Your _bachelor of journalism_ will not secure you a job, your portfolio will. Without a portfolio an editor won’t even consider talking to you.

That universities are taking in droves of students and churning them out with journalism degrees isn’t helping. The market is fairly flooded, as we all are seeing with the media crisis sweeping across the world. Mind you, it’s not hopeless, just a bit more difficult.

Of course, the crisis handling within the media in Australia it’s understandably difficult to stay positive. A lot of journalists and photojournalists got canned in 2014. That doesn’t build confidence. Especially when the focus in Australia is sensationalistic crap and shit-flinging.

I have never observed such a hostile environment as Australia, where it seems that if you’re not writing sensationalistic churnalism, you have to bag out as many journalists and publications as possible.

That’s not journalism — even _yellow journalism_ back in the day had more class than that.

I guess you can blame that on the horrid, and pathetic, _tall poppy syndrome_ that is so prevalent in Australia. It breeds this vile obsession of needing to take down anyone you disagree with.

How about you try to ignore those that annoy you, and one-up them by just writing or producing something better without the need to mention them — be the bigger person and have some pride and humility.

I never managed to find any pleasure in the Australian way of taking the micky, especially the need to obsessively one-up one another. Instead, have a laugh together and move one. No need to always have the last word. That’s not mateship, that’s being a dickhead.

Which is why I found it impossible to discuss politics with a lot of Aussies. If they had no interest or understanding, they always tried to laugh it off or make some silly joke. Where most people would say, _I don’t know much about it, but please tell me more_.

Don’t get me wrong tho— hopefully you’re still reading —I had a great time in Australia. Yes, that is the right tense — great.

You see, I’m not there anymore. At the moment, as I’m writing this piece, I’m in Norway. I managed to escape the clutches of both Newman and Abbott. Seeing what Newman is doing to Queensland and Abbott is doing to Australia I just couldn’t stay any longer — nor the missus.

It is easy to blame the government [for us leaving], but the media is at fault here too.

If you have a look at _Reporters Without Borders’_ [Press Freedom Index 2014](http://rsf.org/index2014/en-index2014.php). Australia is ranked at 28th (fallen two ranks from 2013) while Norway is ranked at 3rd. Not a difficult choice if I want to be able to not only be able to keep the government accountable, but also hell of a lot easier to keep the public informed without the fear of ending up in jail for reporting the truth.

Australia is a nice country with a lot of great people, but I have to make this clear, it’s not the greatest country. Especially in the state it’s in right now.

I know a lot of you will hate me for saying such a thing, but it’s about time you pulled your heads out of your arses and did something — because it can be a really great country.

How do I know this will upset some of you? Because when I’ve spoken truthfully about the state of Australia I’ve been told I’m not allowed to discuss Australian politics because I’m a foreigner. I’ve also been told to go back to where I came from.

Over the last years there has been a lot of debate about racism in Australia. And every time some imbecile tries to tone it down or excuse it by saying other countries has issues with racism too I cringe. Yes, there is some truth to that, but it’s not as bad abroad as in Australia.

And don’t get me started on how poorly the Indigenous Australians are treated, and how [assimilation](http://dokterw.me/2014/12/15/closing-the-gap-to-erase-50000-years-of-history/) is still used as a method to keep them down.

Accept the truth, Australia, their land, was stolen from them, and never given back to them.

On a lighter note, I will miss my Aussie mates. Those of you who truly showed me what it means to be an Aussie, regardless of your ethnicity, skin colour and heritage.

As mentioned, I have hope that things might eventually change for the better. When people are sick of politicians lying and turning Australia into a totalitarian state. I have faith that things will eventually change. It always does when a people of a nation has had enough.

Which is why I’ll still be writing for the Westender while I’m in Europe. Also, consider me as a bad rash that never goes away. I will be back, in Australia, visiting friends and family — and checking in on how things are going with a country I called home for over five years.

Instead of writing local news for the Westender I will kind of be Westender’s foreign correspondent — telling you stories from the world outside of Australia with— hopefully —an Aussie viewpoint.

I hope, and expect, that 2015 will be a much better year than 2014 for Australia and its inhabitants — I’ll be keeping an eye on you from afar.