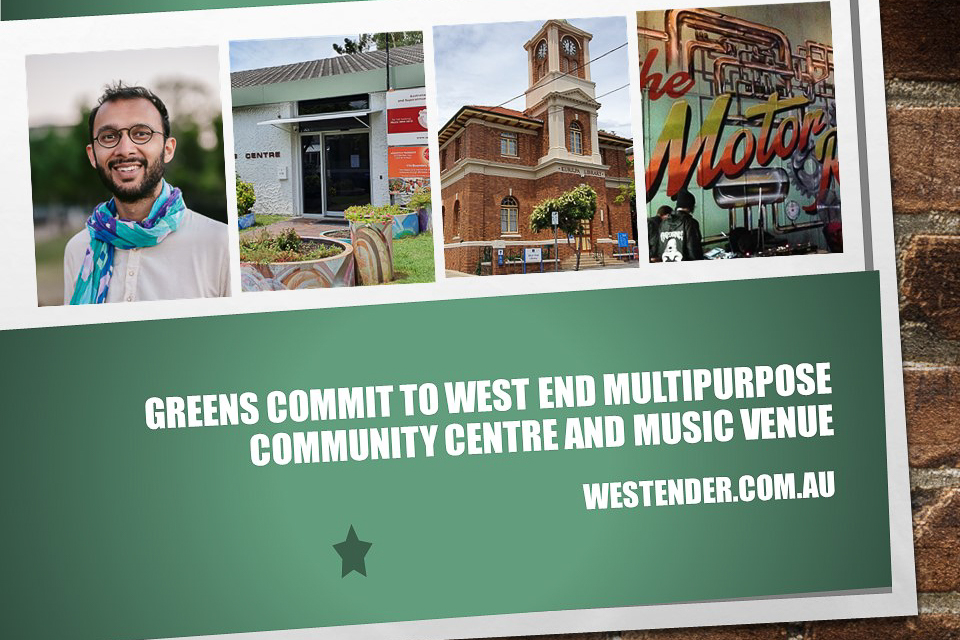 Improved public amenity to meet the needs of the growing West End population is emerging as a key theme in the Council election campaign.

The Greens say that as property values rise in West End and as its population grows, it is becoming increasingly difficult to find spaces for live music and the performing arts.

“Right now West End doesn’t have any dedicated local music venues of a similar size to The Zoo, and I think the 4101 music scene really misses having big local venues like the Motor Room, which was demolished to make way for West Village’, Gabba Ward Councillor, Jonathan Sri says.

“Kurilpa Library only has a small selection of books and very few facilities compared to other council libraries, despite the Kurilpa Peninsula being one of the fastest growing parts of South-East Queensland. The library doesn’t even have a proper public toilet. If a library patron needs to use the loo, they’re told to go down the street and around the corner to a public toilet in the park”, he said.

Council owns both the Kurilpa Library and the neighbouring Kurilpa Hall site.

“I’d like to explore combining and redeveloping these two sites together, preserving the historic library building but making more efficient use of the land behind it,” Greens Councillor, Jonathan Sri said.

“We could have room for a large, sound-proofed, non-profit live music venue, along with a second bookable hall space like the current Kurilpa Hall, a larger library, offices for community groups, and bookable meeting rooms,” Cr Sri said.

Cr Sri also proposes that a redesigned library and community centre could include space for a food co-op, tool library services, art studios and workshops, music recording studios, and a youth space like Visible Ink in the Valley.

“We could design a sustainable, energy-efficient building that fits the character of the streetscape. You wouldn’t want the height and bulk of the new building to detract from the library’s historic clock tower”.

Cr Sri says that West End has a proud history as a hub for music and the arts, and council needs to provide more dedicated public facilities to support this.

“If we think laterally and remain open to unconventional design options, we can create more space for music, the arts and literature while also preserving our historic buildings,” Cr Sri said.