mi:wi: Weaving Together Stories of Human Connection and Disconnect from Nature 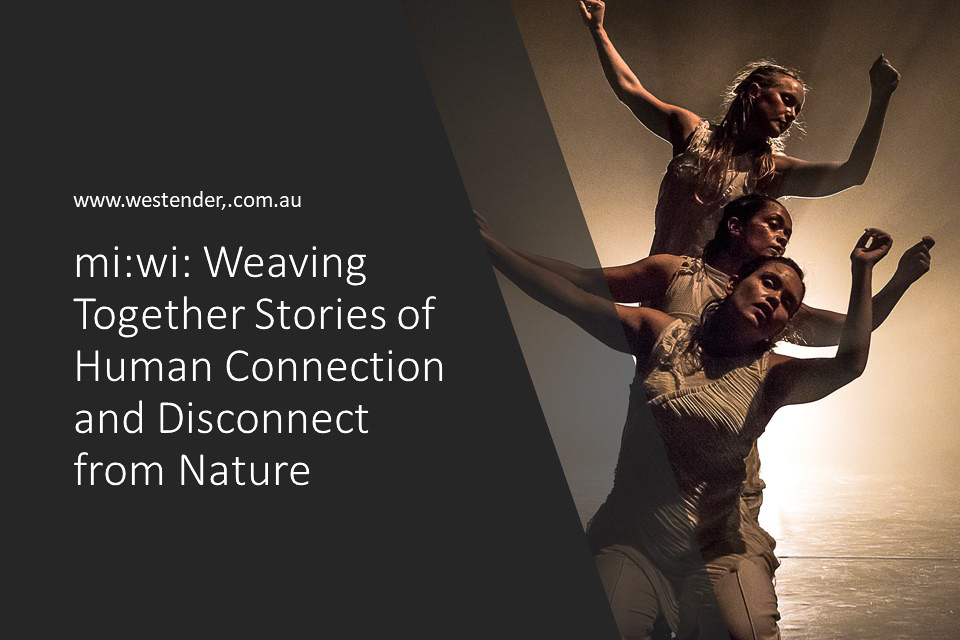 Through dance theatre, this performance tells a powerful story of human disconnect from nature. It opens with Mother Earth struggling. She convulses as she tries to break free from a trope tied around her waist. The atmosphere is dark, the sound is grave, made heavier by the laboured breathing of the dancer. The scene is discomforting, a discomfort that perhaps is needed at a time of indomitable bushfires, unpredictable flooding, and extremely hot summers. mi:wi draws attention onto the emergency of climate disaster, but it does not take away hope for a different future: reconnecting to ancestral practices enlightens the way forward.

Choreographed by Taree Sansbury, a proud Kaurna, Narungga and Ngarrindjeri woman, mi:wi is inspired by the stories of her grandmother, and in particular by her concerns that the drought which hit South Australia in the early 2000s could have jeopardised the continued existence of her culture. Climate change and drought threaten Ngarrindjeri culture by reducing the availability of the rushes used by Ngarrindjeri women to weave traditional baskets, an ancient practice through which women connect to Land and with each other (to learn more about Ngarrindjeri weaving, see here).

Weaving is the thread that brings the choreography together. This is evident is the ways that different stories about the relation between humans and nature are woven through sound and light. Dark, muffled sounds offer a distressing background for a struggling Mother Earth; brighter and more melodic tunes accompanies nymphean dances; blinking lights and broken cacophonies raise anxieties about a robotic future.

Weaving is also explicitly referenced in the scenography. This is very minimalist presenting only a white triangle with dangling threads onto which spectacular light designs are projected, and three long black threads that the dancers use to hang, pull, and interlace.

The performance brings on stage a strong feminine energy. It features three dancers, Taree Sansbury, Katina Olsen, and Keia Mcgrady. They come with different energies and qualities that complement each other. Their movements are expressive, at times pursuing the harshness of straight lines and other times the gentleness of sensuous waves. Sansbury, Olsen, and Mcgrady do it all, like women are often required to by circumstances: they embody fierce warriors, suffering mothers, playful nymphs, heartless robots, supporting sisters, and regenerators of culture. They represent a microcosm of female solidarity. This is particularly resonant in the part of the choreography where the three move in unison until each of them, one by one, drifts off in a restless dance and is pulled back in by the gentle touch of the others.

mi:wi is part of a double bill with CO_EX_EN which will show at QPAC next week. It is produced by the Karul Projects, a performing arts company that promotes reconciliation through art and “tells more stories of Indigenous knowledge and its relevance and responsibility in modern and future Australia’s identity.”