Have you read the news today? #ExtinctionRebellion targets the Courier-Mail 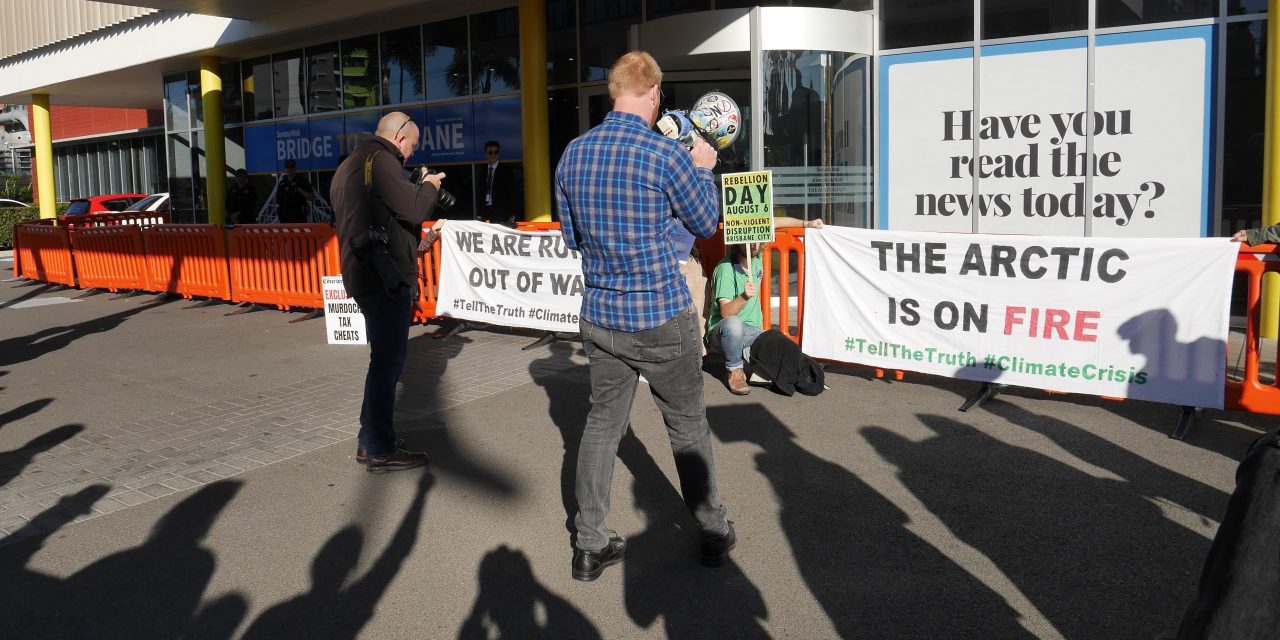 When Police come close to out-numbering protestors, the protestors might rightly assume that someone is taking them very seriously.

A small contingent of Brisbane’s Extinction Rebellion chapter gathered at the doors of The Courier-Mail this morning and were confronted by barriers, police in numbers, and security guards. 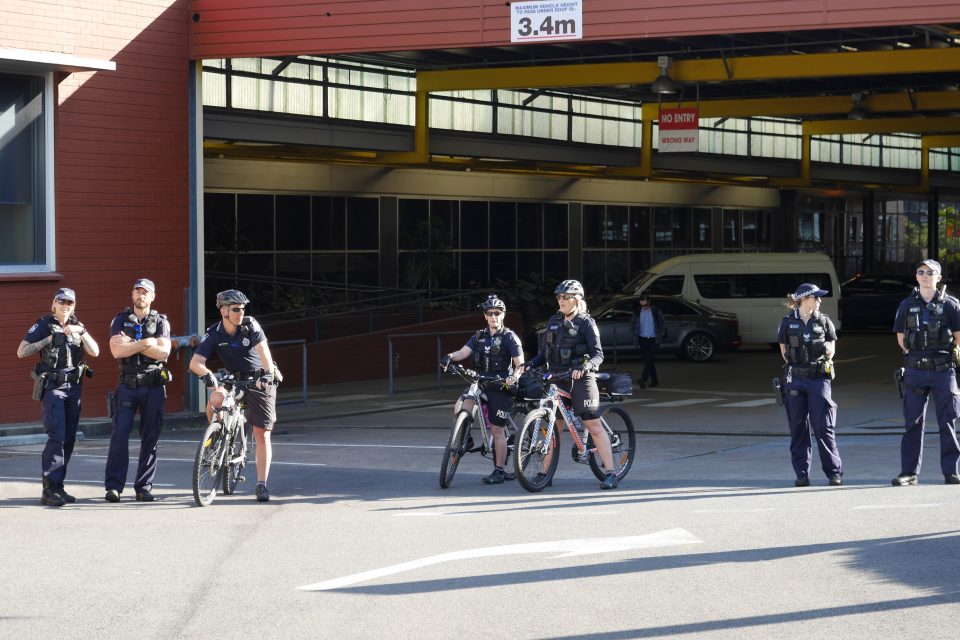 Commenting on the large Police presence, Charlotte, a spokesperson for the group, said that a Courier journalist had told them they had been preparing for this protest all week. “They essentially blockaded themselves without us having to”, she said, adding, “We are a peaceful, non-violent movement”.

Charlotte told The Westender that The Courier Mail was targeted by the group because it has the daily news monopoly in Brisbane and, “they are not telling the truth about the climate crisis.”

“If we expect people to take action to safe-guard their own future, then its the media’s responsibility to stop misleading them and to tell the truth,” Charlotte said.

Asked how Extinction Rebellion might respond to claims that by targeting The Courier-Mail, they themselves are attempting to shut down free speech, Charlotte said, “we are for free speech”. In fact, Charlotte said, she was initially prevented by security guards and managers at the front of the building from being interviewed by a Courier-Mail journalist, though she did later have a brief conversation with a journalist. 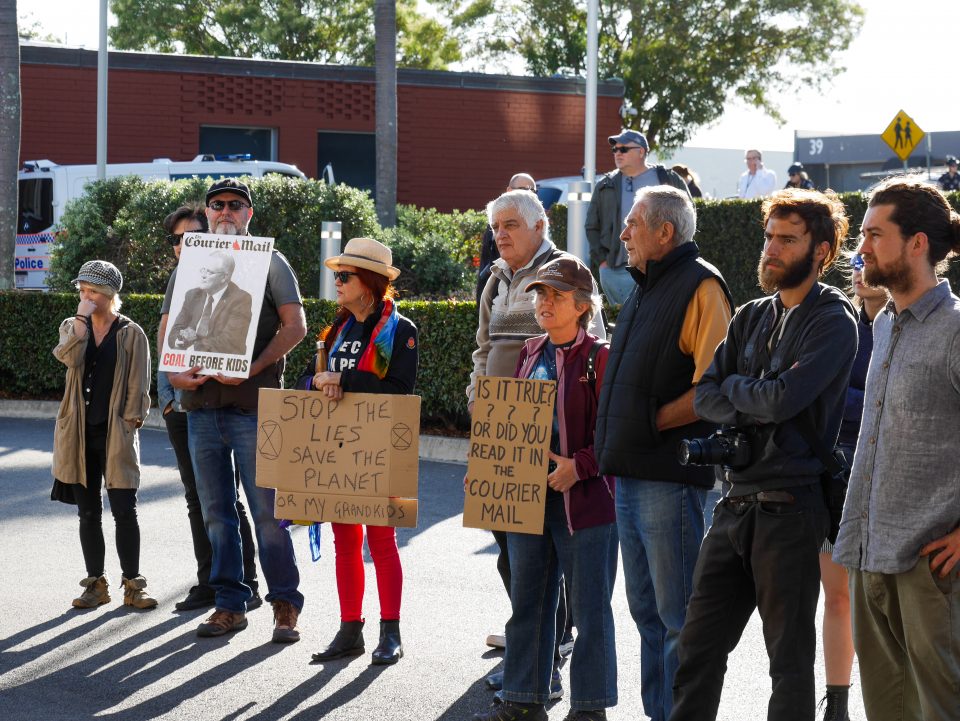 Extinction Rebellion is a global movement that started in London in 2018. Its members believe that we are facing an unprecedented global emergency. Because they consider that the conventional political approaches such as voting, lobbying, petitions and protests have failed, the movement uses disruption and civil disobedience to get attention for its demands. Some in the group have likened their tactics to those used by the suffragists who fought for votes for women in the early part of last century.

Using language such as, “militant”, “feral plot”, and “outrage”, The Courier Mail has published several articles this week on the activities of Extinction Rebellion activists and on Cr Jonathan Sri (with whom the newspaper appears to have something of an obsession) for allowing his office to be used by group organisers. 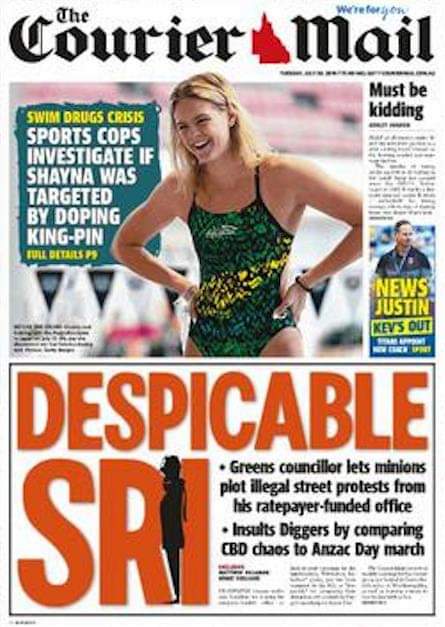 The Courier-Mail is not averse to indulging in a bit of hyperbole, and true to form, in it’s tweet on this morning’s gathering, it talks of activists “storming” the Courier-Mail car park. I was there, and there was no storming that I could see. The tweet now appears to have been removed, and any reports are behind a pay-wall. 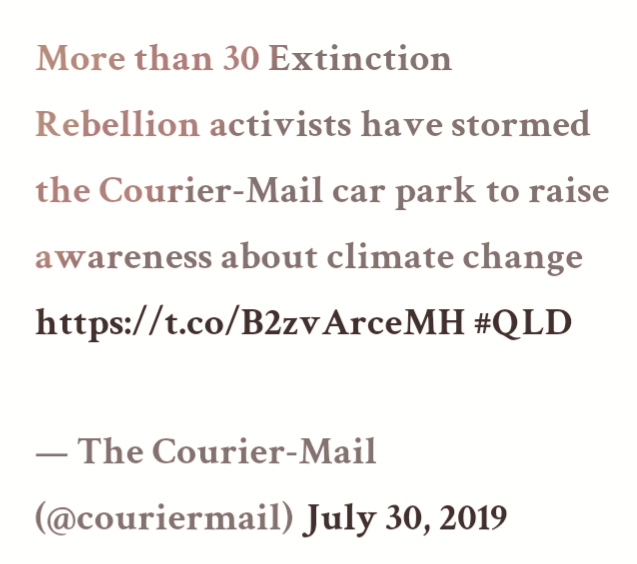 The Brisbane chapter of Extinction Rebellion is planning a rally in Brisbane CBD on the 6th of August. Let’s see how The Courier-Mail reports on that.

The Guardian reported on Monday 29th of July that:

“The Courier-Mail breached the press watchdog’s standards for accuracy, fairness and balance in a report headlined “Mega-mine’s future in hands of greenies” about Adani’s Carmichael mine in Queensland.” Full report HERE

Last week, on the 26th of July, The Guardian wrote that more than 60 news outlets worldwide have signed on to Covering Climate Now, to improve media coverage of the climate emergency.

You can share this story on social media using the buttons below.