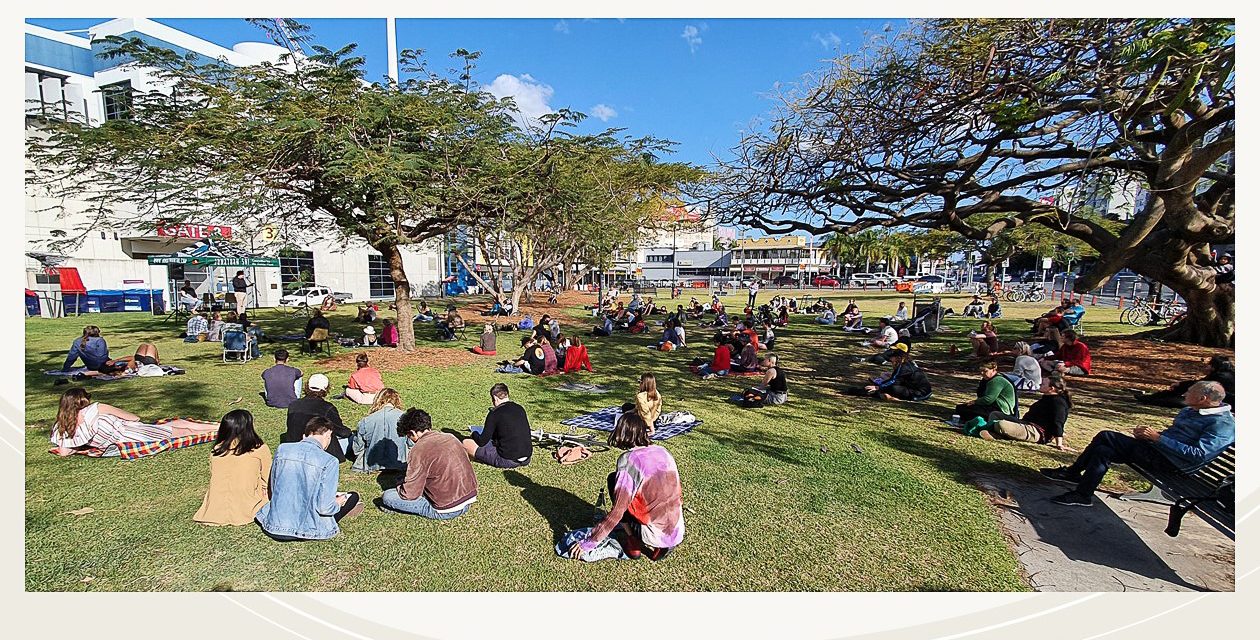 It is rare in these days of social media, sound grabs, and the 24-hour news cycle, for us to take the time to sit at the feet of our local academics and storytellers to learn about our history and what it can tell us about our present.

At 3.00 pm on Saturday, 29 August, a group of about 120 people, safely distanced, came together at Woolloongabba Place Park to hear about the ‘hidden histories’ of Woolloongabba. Most of us admitted we had never used the park, which is best known as the sales point for the Football Record on footy game day, than as a place for peaceful gatherings.

The event was organised by Councillor Jonathan Sri who is concerned about the potential privatisation of public land at the Cross-River Rail station sites at the Gabba and Boggo Road. He is campaigning for what he terms a re-imagined future for the sites, that might integrate the cultural and historical character of the area into accessible open spaces for the community. [1]

“… it’s important we understand the past as well. Learning more about the different ways people have existed in this place throughout the centuries reminds us that different, alternative futures are possible…,” Cr said.

So, sitting in the sunshine, against the background noise of cars whizzing by on the surrounding busy roads, we listened to Urban Historian, Dr Anna Temby and to Dr Ray Kerkhove, a specialist in reconstructing Indigenous site histories, and we were able to reflect on and imagine the place as it was, and what it could become.

In his welcome to country, Yuggera and Toorabul man Shannon Ruska urged us to find our histories.

“No matter where you come from in the world, if you don’t know who you are as a person, that’s lost culture. You should find it. It makes you, and it makes your children or your nephews and nieces, strong again.” 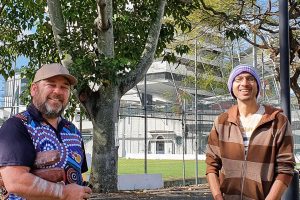 Ray Kerkhove, who is currently Historian-in-Residence with Noosa Council and is involved in mapping projects with the University of Queensland, talked us through the location of major Aboriginal sites close to Woolloongabba Station. We learned, for example, that the Gabba Stadium was once part of a string of waterholes.

“I want to emphasise that around the now-vanished string of waterholes here, lay a major Aboriginal village, bora ground, tournament ground and burial area – all in close proximity to the site,” Dr Kerkhove said.

“Without understanding site histories across a broad sweep of time, the significance of where we live and move, is lost.  This results in a dull uniformity within our suburbs and even nationally. Everywhere becomes the same as everywhere else.”

Dr Kerkhove says this happens because we haven’t bothered to find anything unique or praiseworthy about our local spaces.

“Neither have we bothered to protect or promote those noteworthy features.”

“I find this indifference and neglect becomes communal self-loathing. Communities with no sense of pride about where they live, and no sense of direction about their local future are doomed to either stagnate or degenerate.”

“A little research reveals that any location has rich stories and was the site of something remarkable or important. This could take the form of human achievements, flora and fauna, or just something quirky or inspiring.”

“We cannot go back to the past, yet it continues with us. Many urban areas of Brisbane retain much the same purpose they had in pre-Settlement times.”

It was, “a place of trials and negotiation (tournaments), and a sacred place (a bora). It was the “whirling waters” and the tall-timbered open forest of the whip-tailed wallaby (another name for the area).”

Looking to the future, he said, Woolloongabba could retain the spirit of these things – “… and in some cases it has, in new forms.”

“The challenge is to harness this past to mould a sense of local identity, such that any visitor to Woolloongabba will feel they can readily distinguish where they are, from other parts of Brisbane or Queensland.” 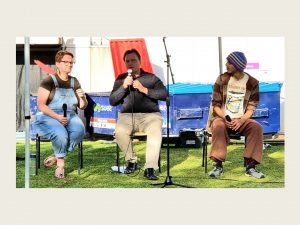 Dr Anna Temby said that participating in discussions about the past, and what it can mean for the future, is the most critical role a historian can play.

“Finding ways to communicate my research to the community in a way that is impactful and meaningful is important to me.”

On Saturday Dr Temby used the example of Yungaba Immigration Depot at Kangaroo Point to illustrate how histories come to be ‘hidden’, and the role that poor planning and what she terms ‘exclusionary development’, plays in this obscuring of the past.

Yungaba is a building Dr Temby said, “… that was once central to the lives of tens of thousands of migrants throughout the 19th and 20th century and is now almost completely removed from not just public access, but also public memory.”

Yungaba continued to be used until the 1990s. Although it is heritage listed, it was sold to a developer in 2009 and converted into luxury apartments with several other multi-storey towers built on the surrounding area. Yunbaba became, Dr Temby said, an example of “unsympathetic and exclusionary development.”

Yunbaba has 3000 square meters of heritage-listed garden that used to be accessible to the public, but despite a community campaign to keep the site open, it is now fenced off and the public is excluded.

“All the general public can really experience of that space now is the view from the public riverwalk … it more or less condemns that site to only ever being able to be appreciated for its aesthetic value, rather than for any cultural, social, any other kind of significance, other than how it looks.”

This exclusion, she said, results in loss of memory about the significance of the place, and ultimately, to loss of community connection and concern.

Dr Temby said that the cultural associations that apply to the Yunbaba building almost certainly apply to the grounds surrounding the Gabba station as well.

“Examining the history of an area should never just be about what was happening in the past…. the best history, the best historical inquiry, should always look towards the future.”

“I think an understanding of our environment fosters a deeper engagement that is critical to people’s willingness to fight for functional and desirable urban spaces.”

“Disconnection from our surroundings and environment, both built and natural, breeds apathy, which makes it far easier (and more likely) for inappropriate and over-development.”