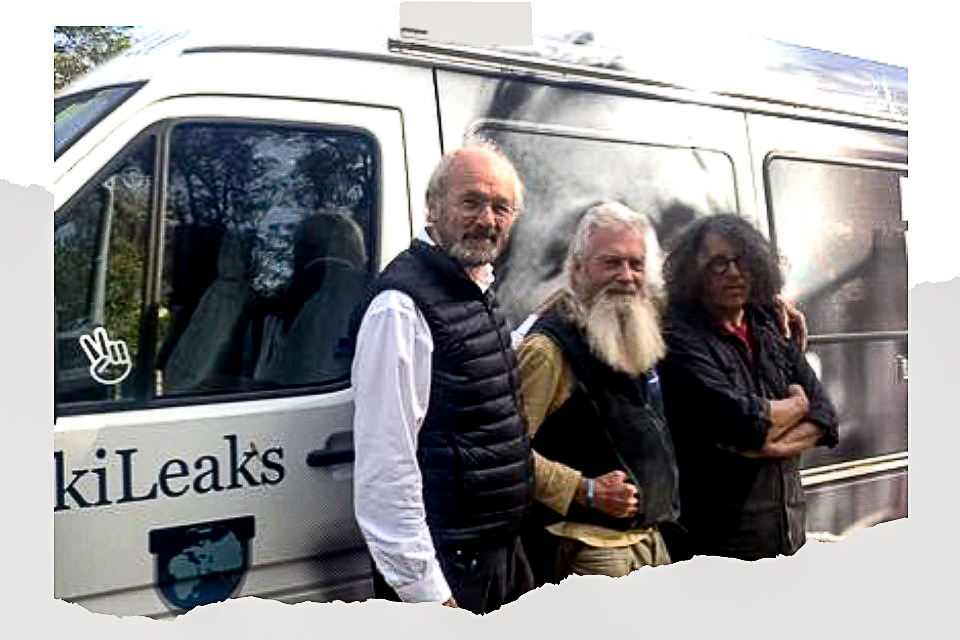 Julian Assange’s father, John Shipton, has been travelling from Melbourne to Canberra via Sydney in a colourful motorcade on the Home Run 4 Julian Assange tour, aiming to galvanise support for Julian in Melbourne, Canberra, and Sydney as well as regional centres in Victoria and New South Wales.

The photo above shows John Shipton at the start of the tour, posing in front of his van, which is decorated with a huge image of Julian and the slogan Australians Bring Assange Home, accompanied by friends Graeme Dunstan  and Jacob Grech.

Graeme Dunstan is the Captain of the Peace Bus, another brightly decorated Kombi, adorned with a van-size version of the No Extradition bumper sticker, which was another vehicle in the convoy of vans and support vehicles that began the two-week tour outside the Victoria State Library on 27 February.

The convoy was at Wagga, having already visited Bendigo, Castlemaine, and Albury, when I spoke to John Shipton. John was buoyed by the tour, which involved public ‘Speak Outs’ outside court houses, interviews with the media, and meetings with supporters in smaller country towns. He spoke with fondness of the stop-over in Benalla where they dropped in to have a cup of tea and found themselves besieged by supporters who thrust money and goodwill on them, and turned up the next day with more money and donations. 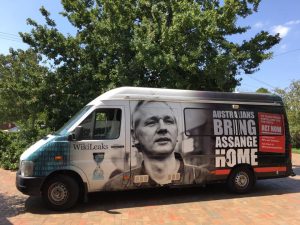 After Wagga, they planned to visit Charles Sturt University, then Goulburn where they would spend two days with a stall at the Goulburn show. At Goulburn they will be joined by Australian filmmaker James Ricketson, who spent 15 months in a Cambodian jail, charged with espionage. After Goulburn the tour will continue to Katoomba, Parramatta, and Sydney before finishing in Canberra on 15 March.

While the team has been out on the road, John’s spirit has been uplifted by nightly contact with Julian in Belmarsh. As John delicately expressed it:

“Seeing that there has been an infestation of COVID-19 19 in the jail since March last year, and the jail and prisoners are in lock-down for 23 hours each day, the jail extends a privilege – in their view – of a ten-minute phone call each day.”

“In the evening I was walking along speaking to him on the phone and a cricket started to sing, and Julian said ‘Is that a cricket? Is that a cricket?’ He hasn’t heard a cricket for nine-and-a-half-years. He likes to hear about where we are because that is his home patch, and he loved touring in motor cars when he was little.”

Despite the long drawn-out harassment of his son, John Shipton was pleased by Opposition Leader Albanese’s recent remarks to caucus that Assange had suffered enough, and expressed his belief support for Julian was growing in many place, though with some notable exceptions.