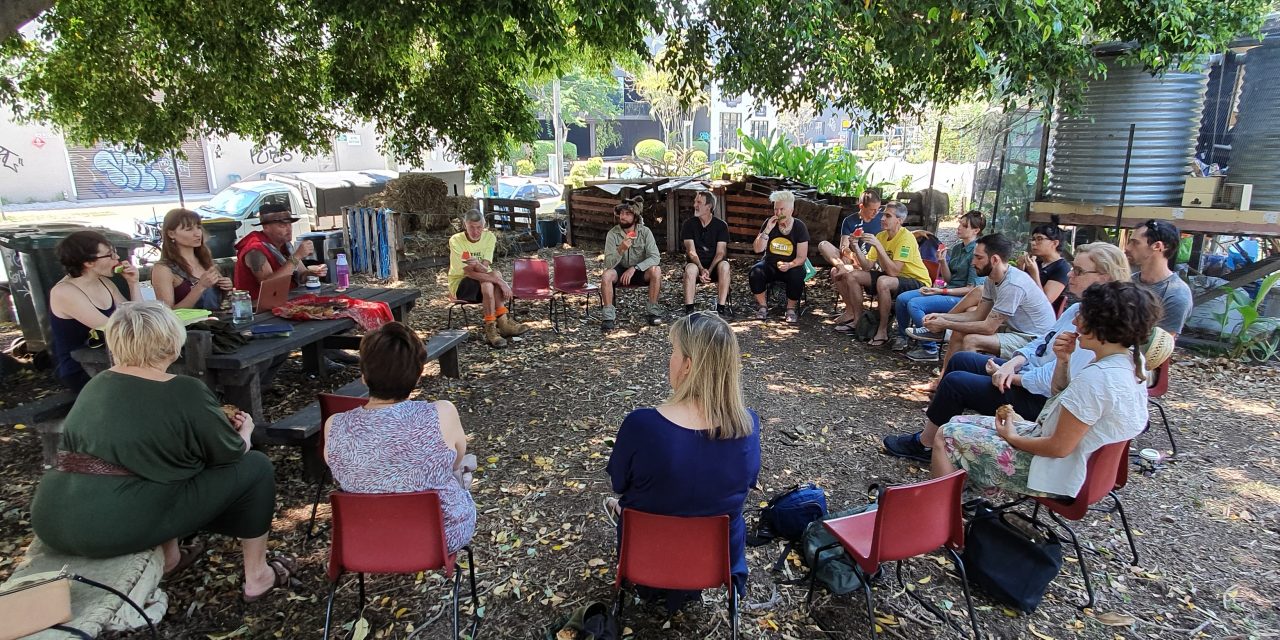 Melissa Smrecnik, the coordinator at Jane Street Community Garden told a meeting of supporters on Sunday that the overwhelming support from the community of some 1300 signatures was a catalyst in securing a meeting last week (Wed 6 Nov) with Brisbane City Council to discuss future options for the space.

Ms Smrecnik said that the discussion was productive, and that Council indicated its willingness to consider a number of things, including:

The Jane Street garden team is waiting for written confirmation of the matters covered at the meeting.

Cr Hammond has not yet provided written details, but she told The Westender that:

She said that Council is continuing to consult with local residents and stakeholders, including members of the wider community who use the park and community garden, and the local State Member, Jackie Trad.

“Once consultation is complete, a time-frame for the work will be finalised. I look forward to working with residents to deliver this important project for the benefit of the wider community, while maintaining the Jane Street Community Garden,” Cr Hammod advised.

Gabba Ward Councillor Jonathan Sri welcomed news of the Council meeting with Jane Street and other stakeholder representatives but offered a caution.

“It’s great to see the council is now taking the garden group’s concerns more seriously, but I don’t think we can get complacent just yet.

“I don’t think we as a community should agree to any work impacting the garden until we get a very clear written commitment from the LNP that sufficient funds will be made available to restore and rejuvenate the garden after the drainage work is completed,” Cr Sri said.

Local Member Jackie Trad who facilitated the meeting with Council told The Westender:

“I stepped in to support the Jane Street Garden community – it’s a much-loved garden with wide community support.  Urban gardens in high density suburbs like West End are a very important way that communities can share food, reduce waste, educate and provide a space for social engagement and inclusion.”

“As Melissa said, the meeting with Councillor Hammond was very productive and I am committed to working with the Community and Council to guarantee a positive outcome for the Jane Street Community Garden,” Ms Trad said.

John Mongard, who attended the meeting with Melissa, and who assists both Kurilpa Futures and West End Community Association, considers that there is more to be done for Jane Street and Davies Park as part of the upgrade project.

“The $2.9M, park budget still appears to be delivering for the community very little in the way of greenspace. It is mainly going to a big pipe, a big gravel parking area and a toilet which is nowhere near the new greenspace. After waiting ten years for the Davies Park budget to be finally activated, the community appears to be getting an underwhelming park comprising more flat grass, less shade, and few if any of the park features provided at Bunyapa Park. We would like the new park on Montague Road to at the very least provide shaded seats and a toilet in the short-term works,” Mr Mongard said.

Cr Sri also considers that there are bigger issues at stake that these should be considered within the context of this project.

“I still think we need a broader rethink of how we manage rainwater within the city. Rather than simply laying more and more expensive underground concrete drains to flush stormwater straight out to the river, we should be exploring bio-retention and water-sensitive urban design solutions where rainwater is captured and stored on site for watering gardens and trees.”

“As climate change leads to less secure water supplies, we need to be more open-minded about opportunities for urban wetlands, seasonal ponds and natural creek-ways as well as artificial rainwater tanks to store water within our parks rather than letting it flow straight out to sea,” he told the Westender.

The Campaign goes on

Community members at the Sunday meeting supported the continuation of the “Jane Street Community Garden Matters to Me!” campaign.

Ms Smrecnik said that community support for the gardens provides it with its social licence to occupy the space, but a formal lease agreement with Council would give the garden greater security as it continues and expands its work.

Others at the Sunday meeting observed that as Council is seeking to improve its ‘green’ credentials, support for the garden is an opportunity for Council to demonstrate its practical commitment to a “Clean and Green Brisbane”.

If the drainage works do proceed, it is expected that they will occur over late December and January.

During this period, it is hoped that the community will continue its support, for example by community members agreeing to adopt a plant or plants to look after at home until the works are completed.

Further community meetings will be planned once Council provides its written advice on options and timing, Ms Smrecnik said.

You can listen to the full interview with Melissa Smrecnik here:

Don’t bulldoze our garden – the community plans for action – https://westender.com.au/dont-bulldoze-our-garden-the-community-plans-for-action/