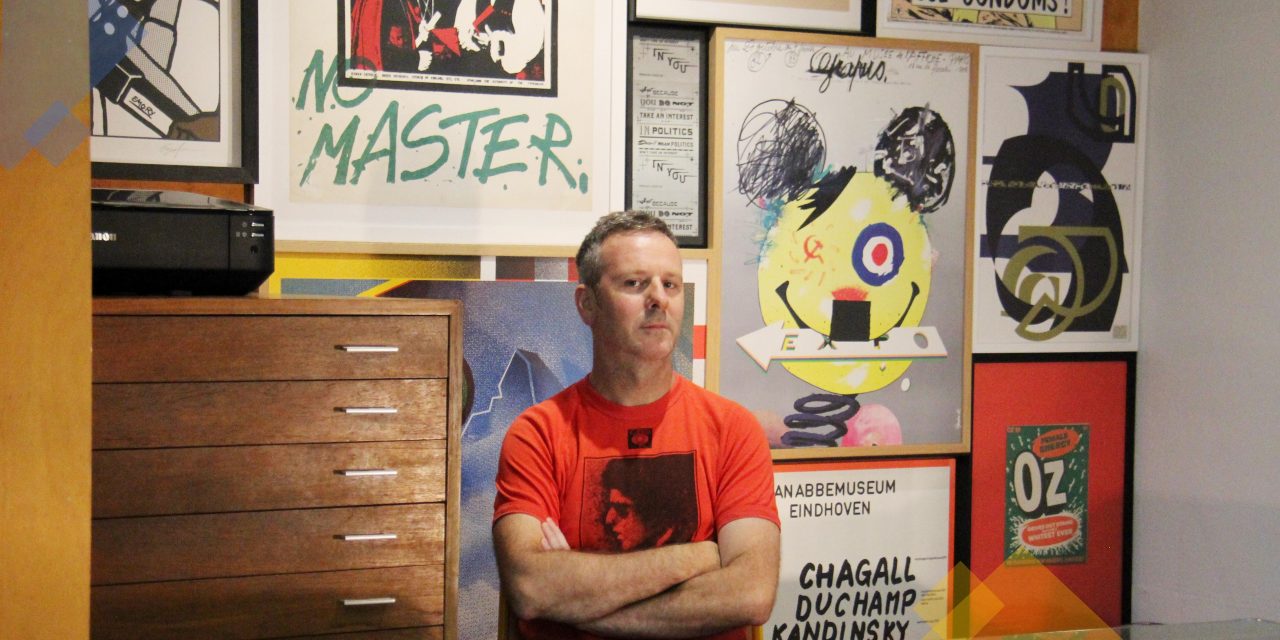 In 2022 Inkahoots will be celebrating their 32nd anniversary, making the innovative Brisbane-based multi-disciplinary design studio one of the longest-running and best known in Australia. They are renown as being one of the few graphic design studios in the world refusing to work with corporate clients, working instead as community advocates at the intersection of design, art and activism.

Inkahoots initially emerged as a community-access screen-printing studio in 1990. From its modest beginnings, paying $50 a week to the Transport Workers Union for a concrete basement unit in inner-city Teneriffe, Brisbane, the practice moved to the West End Estate. All was going well until one night in 1998, when an arsonist lit a fire that engulfed the entire studio and contents, destroying everything, including archives and computers. The fire was a significant setback, fortunately, a number of local people and businesses came to their aid and helped the studio stay afloat. Fires were not uncommon in the tin and timber housing development of the West End Estate. This one, the police suspected, was lit by a far-right activist targeting left-wing artists.

The Estate cottages were established around 1870, built on farming land in preparation for the influx of people moving to West End to take up positions in the newly opened factories. Speculators divided the land into tiny blocks on narrow streets accommodation that was supposed to be built to a 50-pound budget; barely a metre separated some of the houses and families had to share each other’s secrets of love and loss. On the edge of the Estate, businesses sprung up in Vulture and Boundary streets and on Hardgrave Road. In 1995 Inkahoots moved into one of these narrow delightful small shops, fronting Boundary Street in the heart of West End.

Jason Grant joined the studio in 1994 and, with co-director Robyn McDonald, evolved Inkahoots into an activist design collective.

Jason was born on the South Island of New Zealand, studied fine art and graphic design in Brisbane, travelled extensively, and lived for a period in London, where he designed, art-directed and wrote for the leading international journal of visual culture, Eye Magazine. He also lectured in typography and art theory for many years at Griffith University.

“Originally Inkahoots formed organically out of a collision of ideas, individuals and circumstance,” Robyn says.

“Today, even a mature studio like Inkahoots is constantly changing in response to shifting circumstances, new ideas and technology – relentlessly imagining how best to motivate and move an audience and how best to explore the issues that impact on our lives,” Jason added.

“Thanks to the intellectual and creative rigor of Jason’s design and writing, Inkahoots’ work has appeared in leading design publications and exhibitions worldwide, which has led to the studio’s popularity, nationally and internationally,” Robyn said,

Leading UK design critic Rick Poynor wrote of Inkahoots in 2013: “They have shown the continuing viability… of a form of engaged design that has few recent champions.”

In 2011 Inkahoots moved to Princhester Street in the West End estate next door to the Islamic prayer house. Their journey was now complete with the relocation to a purpose-built studio designed by Jim Gall.

“One way to interpret the name Inkahoots is ‘collaboration’ and the studio is nothing without its amazing designers and developers including: the remarkable Jordan McGuire who can make images, music, or video with a rare sensibility and rigor; Mat Johnson who can code absolutely anything and make it look easy; Bhu Vidya in Melbourne who’s code is so clean you could operate on it; super talented designer and musician Ben Mangan who was with us in Brisbane before moving back to Ballarat, and continues to collaborate as part of the team; and Joan Sherriff our treasured long-term accounts manager,” Jason says.

Inkahoots works with large national and international clients like their recent global post-branding project with Greenpeace and their current work with Victoria’s McClelland, the only gallery dedicated to sculpture and spatial practice in Australia. They also work with local community organisations such as West End Making History Group (WEMHG).

“It was really great to collaborate with West End Making History Group (WEMHG) on their series of plaques about our distinctive local history – every bit as important to us as working with big national or overseas clients”.

“The key priority of the history group is to work on community conscious-raising about local architecture, history and culture. The plan for the history project was to develop six plaques that would be permanently mounted and situated in Boundary Street in West End, each one having an individual, historical and cultural story of the 4101 area,” Jason said.

The History Group believed that they could complete the job in 12 months.

“Jason probably thought they were joking but held his views for a later discussion,” said Tim Quinn of the WEMHG.

The rest was history-making. It turned out to be a project made both in heaven and hell. In fact, it ended up taking two and a half years and eventually was an outstanding success, placing West End history plaques on the footpath in Boundary Street, a city that has little local suburban historical material on show.

“It’s important for us to draw a distinction between public communication as a social imperative, rather than as predatory corporate marketing,” Jason says.

This idea matched the thinking of the WEMHG. Inkahoots were incredibly patient and caring and planned for the job to be provided at cost. It was a generous concession for a voluntary community organisation like WEMHG.

Inkahoots took the job on as it had done for many local community groups.

Jason refers to community projects Inkahoots has conducted where young people, who have never screen printed a poster in their lives, are taught the process in the morning and produce a poster to be pasted in a prominent location later that night. This is what matters most to Inkahoots – supporting people in the community to get their message across, tell their story, or fight their fight.

Inkahoots works in a space using graphic design as a tool for social and cultural critique instead of simply being a visual agent of marketing.

“I think that every moment is an opportunity to create something relevant and unique,” Jason says.

As well as the client commissions, a significant part of Inkahoots’ work is self-initiated interactive projects, such as New Anthems, a collaboration with Berlin’s Buchstabenmuseum and A-Z, Berlin’s new space for experimental graphic design. Another recent large-scale interactive projected work is Hoisted where participants celebrate the plants and animals of a site by creating giant animated flags with their phones, most recently staged for the Museum of Brisbane’s BAD Festival.

While mentoring at a design conference in Slovenia some years ago, Jason was invited to attend a local school outside the capital Ljubljana. The school housed a great selection of 20th-century Slovenian art. Paintings and sculptures were freely hung in the corridors and classrooms of the public primary school. This was the moment when, with the help of local charity fundraiser and Community Plus+ board member Marilyn Trad, and local gallery owner Josh Milani, Jason had the idea for TRACE – a kind of temporary, multi-venue public art gallery in West End.

The Trace Biennial has become a much-loved event, showing some of Australia’s most important artists in local people’s houses and unexpected venues, including fruit shops, Asian grocers, mechanic’s garage, barbers, etc. The event pays the artists and generates significant funds for the local community association Community Plus+ and their vital work with marginalised and vulnerable community members.

West End is proud of businesses like Inkahoots, with a strong community conscience.

Inkahoots has now been locally and internationally acclaimed for its bravery, expression and creativity in design. Their artwork is unique, vibrant and engaging. Jason Grant, Local Legend.