The developer and the shorebirds | the fight for Toondah Harbour 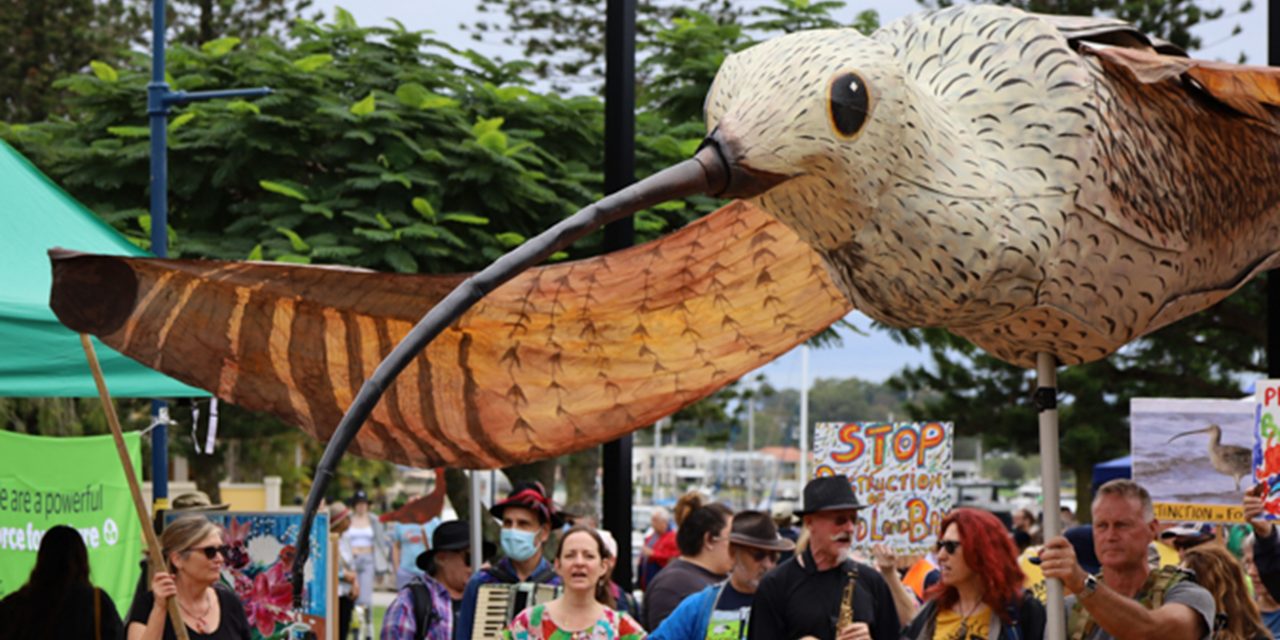 The campaign to save the mudflats of Toondah Harbour in Queensland’s Moreton Bay has become emblematic for many in Brisbane, and further afield, of the David and Goliath battles that keep emerging across the state against unchecked development and its impacts on the environment.

Toondah Harbour is an internationally significant wetland covered by the Convention on Wetlands of International Importance (the Ramsar Convention). It is an important feeding site for the critically endangered Eastern Curlew and other migratory shorebirds. Some 36 species in all, these birds fly each year along the East Asian-Australasian Flyway, flapping, not gliding, for the entire 10,000km journey, from breeding grounds above the Arctic Circle in Alaska and Siberia to feeding grounds in Australia and New Zealand.

In 2015 Walker Corporation submitted plans to construct 3,600 apartments on the environmentally significant wetlands next to Toondah Harbour. The project has had the support of the Redland City Council, State Governments (both LNP and Labor) and the Federal Coalition Government. (See note at end – for a detailed timeline of events, see the Toondah Real Estate Scheme: Summary and Timeline)

On Mothers’ Day, more than 2500 residents and supporters joined in a rally at Cleveland Bay for World Migratory Bird Day (WMBD). With the theme, Walk for Toondah, they aimed to revitalise opposition to the project during the 2022 Election campaign.

“If you want to support climate repair or to conserve biodiversity, mangroves and seagrass meadows are already working hard to achieve both. Let’s acknowledge their value to our society and keep Toondah Harbour wild and working so Australia fulfils it zero emissions target.

Toondah sits within the federal electorate of Bowman, which since the resignation of controversial LNP MP, Andrew Lamming, is being contested by newcomers for The Greens, Labor and the LNP. The seat is considered safe for the LNP with a margin of 10.2 per cent.

Labor and LNP candidates have declined to comment on their position on the development, and did not attend the rally, preferring to wait until the draft Environmental Impact Study (EIS) is released for public comment.

The Greens and United Australia Party candidates for Bowman oppose the development, and the Greens were a visible presence at Sunday’s rally.

While it’s a 40-minute drive from the suburbs of Griffith, Toondah has cropped up as an election issue here as well. Last week, Greens candidate Max Chandler-Mather challenged his Labor opponent, Terri Butler MP, to come out against the development.

“It’s patently clear that destroying an internationally recognised wetland for a massive private development would be devastating for the environment, and Terri Butler’s failure to oppose it is an abdication of her responsibility as shadow environment minister.”

“Walker, the developer behind Toondah Harbour, has donated $87,000 to Labor since 2015 and you have to wonder what sort of influence those donations have bought,” Mr Chandler-Mather said.

Ms Butler, Shadow Minister for the Environment, could be the next Environment Minister if elected as part of a Labor Government on 21 May. However, Ms Butler told the Westender it would be irresponsible for her to prejudge the outcome of the matter at this stage.

“The Greens party is not a party of government so it’s no surprise they don’t understand that as a future decision-maker, I need to be careful not to put the validity of future decisions at risk.”

“If an Albanese Labor Government is elected, I will be the environment minister and so it would be irresponsible to prejudge the outcome of any statutory obligation I may be called upon to exercise, “Ms Butler said.

Next steps in the approvals process.

The Environmental Defenders Office (EDO), which is advising groups opposed to the development, told the Westender that the next step in the approval process for the development under the Environment Protection and Biodiversity Conservation Act 1999 (EPBC Act), is the release of the draft EIS by Walker Group (the proponent).

Andrew Kwan for the EDO said the Department of Agriculture, Water, and the Environment (DAWE) has to determine whether that draft EIS meets the guidelines. When it does, it is released for public consultation. Mr Kwan said draft EISs are usually multi-volume documents comprising thousands of pages of technical-scientific and expert analysis.

Once the draft EIS is released, anyone can provide feedback. Mr Kwan said that the best way to prepare a submission is by engaging in the technical material. Once the public consultation process is complete, the Walker Group will be provided with any feedback received and asked to address the issues raised. A final EIS is then submitted to Minister and Department for consideration.

Concerning Ms Butler’s refusal to declare a position on the project, Mr Kwan said that given the draft EIS is pending, it would be prudent for any decision-maker to wait for the submission of the draft EIS before making any assessment of its merits or otherwise.

“A prudent decision maker wouldn’t want to be seen to be fettering their discretion in terms of their statutory obligations.”

A Walker Corporation media spokesperson told the Westender that the draft EIS is not yet available for release. The group is working through adequacy approval checks with the Department, which he said is a detailed process, and will release the draft for public comment once that process is complete. Unfortunately, they are unable to provide a timeline for this.

Andrew Hunter from Birdlife Australia said the organisation has been fighting this development since it was first proposed in 2014.

In 2018 the then Minister for the Environment, Josh Frydenberg, was advised by his Department that Walker Group’s Toondah Harbour proposal was ‘clearly unacceptable’ because of the damage it would cause to the globally significant wetlands. The Minister rejected this advice and sent the proposal to the next assessment stage.

Mr Hunter said Mr Frydenberg’s decision illustrates the inadequacies of the EPBC Act, which allows for a level of ministerial discretion to reject the expert advice of their department.

“Birdlife Australia has been advocating to all sides of the political spectrum, whether that’s the shadow government or the government in power, that this development proposal should never have gotten to this point in the first place. The department was very clear in their correspondence to previous ministers for the environment that this proposal would have significant impacts on the RAMSAR listed wetlands at Toondah Harbour “

“This includes impacts on feeding habitat for critically endangered birds such as the Eastern Curlew.”

Regarding candidates declaring their position, Mr Hunter said Birdlife Australia would “welcome any public stance that any party takes to say that this proposal is wholly inadequate and should not go ahead.”

“So it’s all the more important to protect the sites that we know they go to every single year. These birds have what’s called strong site fidelity, which means that they come back to the same places every single year, because they know it’s a source of food; it’s like going down to your local servo because you know, there’s fuel there. And we know we can’t recreate these sites either. There’s no way for humans to be able to recreate these ecosystems that have been evolving for decades or eons to get to this point. So we need to protect them while we can.”

Mr Hunter said putting a 3600 new unit property development right on top of internationally important wetlands is unprecedented in Australia and across the world.

Mr Hunter said Sunday’s rally, was an opportunity to make sure that all candidates in the electorate of Bowman and beyond are paying attention.

“Australians and citizens of the world have seen what is happening to our natural environment. We keep seeing pieces being taken here and there to give away to private developers like Walker Corporation, and we see an unchecked urban development and encroachment into intact natural spaces.”

“We’ve seen the massive flooding in Queensland and New South Wales and the bushfires in 2019 and 2020. The environment is in pretty bad space at the moment. And I think every day Australians are starting to notice that. Australia is such a special place and protecting that, I think, is really starting to become important to voters.”

All Images by Jan Bowman

In an earlier version of this story the date for the Walker Corporation released plans for 3600 units is listed as 2014. The date was in fact November 2015. A link to a detailed timeline can be found here: http://savestraddie.com/toondah-real-estate-scheme-summary-and-timeline-2/