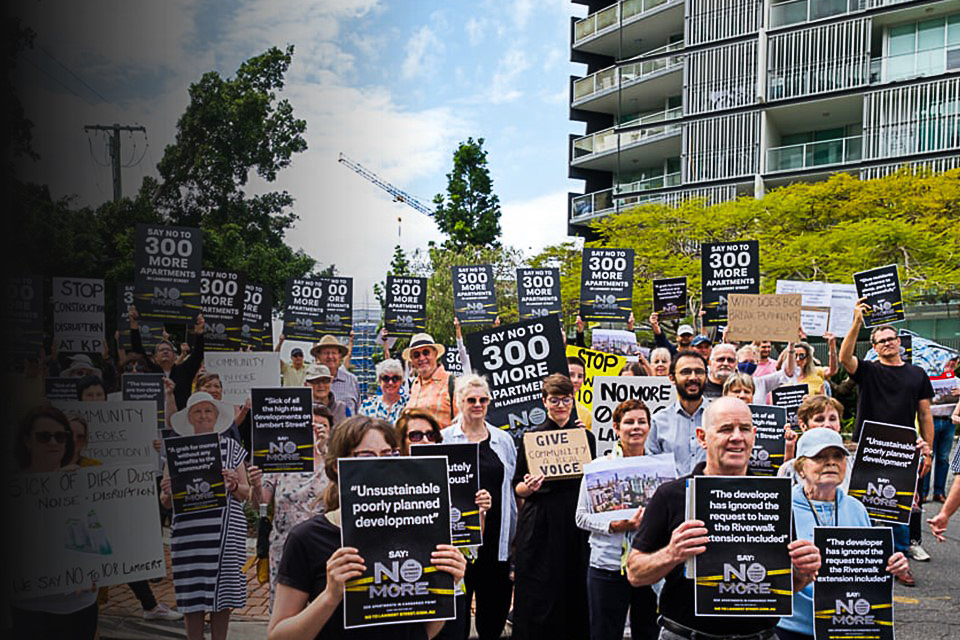 Questions are being asked about the relationship between developers and Brisbane City Council as angry Kangaroo Point residents demand to know why a developer was allowed on a town planning committee: an arrangement they say they knew nothing about.

It has emerged the developer Pedro Pikos was a member of the Community Planning Team (CPT) that advised Council on the redesign of the Kangaroo Point Peninsula Neighbourhood Plan in 2019.

That plan saw allowable building heights increase by 50% over much of the peninsula, and residents say Lord Mayor Adrian Schrinner has handed Pikos a goldmine on a platter.

The Say No to 108 Lambert Street group claims that Mr Pikos has at least five development sites in Kangaroo Point.

“It’s outrageous that a developer who has so much skin in the game was allowed to be on that Community Planning Team. While the new neighbourhood plan was in the review stage Pikos was busy putting options on a bunch of properties on the peninsula. Isn’t it interesting that rather than embarrass his council friends right before an election he waited until June 2020 to lodge his grossly overcrowded development application? It looks very much like planning for mates,” resident Lori Sexton said.

In June 2020, Brisbane City Council approved 200 apartments in three 10-storey towers at 108 Lambert St, but in December rejected Pikos’s updated application to increase the tower height to 15 stories: Pikos has appealed to the Land and Environment Court.

The residents’ group met with Councillor Krista Adams, Deputy Mayor and Chair of the City Planning and Economic Development Committee on Thursday 4 February.

They asked Cr Adams to explain why developer Pedro Pikos was invited to be a member of the Community Planning Team that provided input to the Kangaroo Point Peninsula neighbourhood plan changes in 2016—17.

A Council spokesperson told the Westender that Council undertook studies and investigations in preparing the Kangaroo Point Peninsula Neighbourhood Plan, including traffic and transport investigations and open space audits and heritage studies.

“The Kangaroo Point Peninsula Neighbourhood Plan balances the need to accommodate additional growth in the peninsula with the ongoing preservation of the area’s heritage and character values.

The Council spokesperson said it actively involved the community in preparing and reviewing the neighbourhood plan.

Council said that all community planning team members have connections to the area and therefore could all be viewed as conflicted.

“These residents are chosen due to their interests as landowners, residents and business owners.” 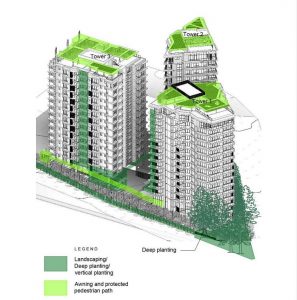 However, Lori Sexton of the Say No to 108 Lambert Street said:

“The inclusion of Mr Pikos on this Planning Team does raise alarm bells and challenges the level of transparency and conflict of interest. It is evident his involvement on the planning team is one of commercial interest rather than to protect the integrity and historic value of the suburb. The acquisition of the adjoining properties, seven in total, including the removal of three pre-1911 cottages is coincidentally good timing with the change in the Neighbourhood Plan.”

“The sheer scale of the windfall to Pikos makes it inappropriate for any developer with investments in the local area to be involved in these committees. This practice leaves Brisbane City Council open to criticisms. We call on Council to give residents more say over where and how they live, rather than listening to the development industry.“ Ms Sexton said.

Councillor Jonathan Sri, said the arrangement for constituting Community Planning Teams as part of Council’s drafting process for neighbourhood plans, “is not transparent, representative or democratic.”

“The developer Pedro Pikos was present at and participated in the Community Planning Team meetings for the drafting of the new Kangaroo Point Peninsula Neighbourhood Plan, even though his company stood to benefit financially from zoning changes that allowed higher density development around the northern end of Kangaroo Point.”

“This process raises serious concerns about the potential for undue influence by property developers on planning decisions.”

“A developer’s financial interest in zoning changes goes far beyond that of other local residents and small businesses in an area, so the risk of conflicts of interest and undue influence is exponentially greater. A decision to upzone a site from 10 storeys to 15 storeys can represent a tax-free windfall to a developer that’s worth tens of millions of dollars,” Cr Sri said.

Ms Sexton said the peninsula’s new neighbourhood plan was developed without sufficient community consultation, as shown by the low number of public submissions on the proposed changes.

“Only 214 people out of a population of almost 10,000 responded to the plan, while in West End more than 5000 people put in submissions to their neighbourhood plan.”

Ms Sexton said residents were not well enough informed about the effects of the changes, which allow 15-storey developments throughout most of the peninsula.

“It’s fairly easy to get a message to all the bodies corporate throughout the peninsula, and if we’d been made aware that the new plan was to cram dozens of 15-storey towers into a suburb that has tiny roads, no decent bus service, reduced ferry services, no community facilities and minuscule green space then, of course, we would have made submissions,” she said.

Lori Sexton said Brisbane Council’s idea of community consultation, “is a joke — it’s all about favours for mates at the expense of the community.”

“The Council is trying to fulfil population growth targets by cramming everyone into Kangaroo Point, giving developers huge profits without providing the infrastructure to cope with the existing population, let alone this influx of new residents,” she said.

Ms Sexton said that in Lambert Street alone there was potential for Brisbane City Council to approve up to 1000 new apartments:

“Lambert-St is the main connection for cyclists coming from the eastern suburbs through Kangaroo Point to the city: with up to 2000 extra cars using this tiny road access to the new Green Bridge is going to be a death trap.”

“This city cramming is going to destroy what people move here for, and already we’re seeing major traffic jams at pinch points. Even if Council does build the new Green Bridge, Council is not providing safe connections to it.”

The residents’ group is also concerned that developments are being encouraged and approved by Council in areas like Kangaroo Point and West End to meet targets set in the South East Queensland Regional Plan or related plans.

“The Strategic Framework identifies inner-city areas like Kangaroo Point and West End as having the highest concentration of employment, cultural facilities and residential development in Brisbane.”

The Say No to 108 Lambert Street group has written to the Lord Mayor asking Council to convene a community meeting. The group makes a number of additional requests, including: