Short back and sides: When Phil ruled the hair waves. 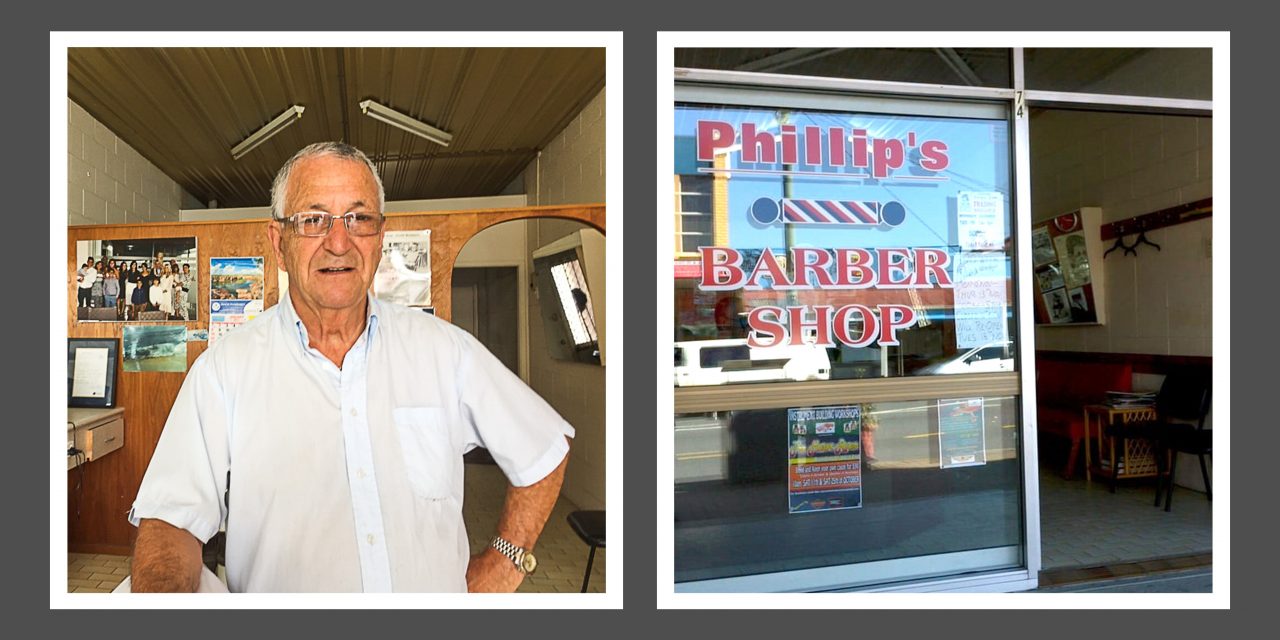 There were three fruit shops, three butchers, two newsagents, four pharmacies, three barbershops, a supermarket, and a hardware store: all thriving businesses when young Phil Apolakiatis took up an apprenticeship and started working as a barber the heart of Brisbane’s West End.

“On the weekends we came to West End to see relatives and shop. Shopping was a major activity, particularly if you were seeking specialty items, like special cheeses, olives, dried and salted seafood and a number of other imported products that were often only found in West End or Fortitude Valley,” Phil said.

“We would catch the tram from Buranda to the city and then from the City to West End which felt like an enormous journey, taking at least an hour and a half.”

Phil’s parents came to Australia from Rhodes in 1927. Phil was born in Brisbane and lived in Kelvin Grove up to the age of eight when the family moved to Buranda in 1953. He attended Buranda Boys State school which seemed like it was away in the suburbs. As far as Phil was concerned, the distance to any suburb of Brisbane was somehow decided by how far from West End it was.

West End was the centre of his universe. It was an exciting place for a young man. There was a lot happening: music, movies, lots of people, great milk bars. He also enjoyed it as he was able to mix with other kids who were Greek.

His state school was a tough place. He remembers being one of four children of Greek origin in the whole school, not just in his class but the school. It was not the most comforting place to be. Things were difficult and he was subjected to plenty of taunting and bullying. Sometimes there was no escape except hiding in the stairwell.

One day he decided that he was going to react the next time someone taunted him.  His actions were more severe than he had anticipated. He accidentally head-butted a student who was taunting him, and within seconds blood poured from his nose running onto his shirt. He had no idea what was going to happen next but in fact, it worked, he was a hero to the Greek kids, and the others left him to his own devices after that.

Phil took up sport and played rugby league for the Easts Football Club. Unfortunately the club has not won a premiership since 1991.

Phil started his barbershop career at 155 Boundary Street West End. It was an established men’s hair salon with five chairs generally occupied most of the time. It was tradition among most men to have a haircut every 10 days: a trim and cut, or short back and sides.

Quick haircuts were standard fare. The story was that you didn’t go to the Barbers at 155 Boundary St to have your hair teased. This shop was essentially for cutting. No alcohol, no video, just quick efficient cutting. This form of haircut quickly became a part of Phil‘s method and lasted most of his working life. His clients would come in for a ten-minute haircut. Ten-minute cuts were also cheaper.

Phil went into hair cutting around the time the electric clipper was introduced into hairdressing. The fancy new electric cutter was popular and was a lot less painful than mechanical hair cutters. He remembers kids in pain with the manual cutters but not a murmur with the electrical method.

Phil worked in this salon for nine years before “getting sacked” he says, because the owner couldn’t pay his long service or holiday pay.

His next destination was 74 Vulture Street, a small shop opposite the bus stop in the heart of the shopping centre, perfect for a quick short back and sides. Phil was thrilled. He now had his own place. It was a perfect spot with the buses and trams depositing people in front of his shop all day.

In those days his clients were very loyal and would drop in while walking past if a chair was empty. Sometimes for a chat, other times for a cut.

“West End had everything, you never needed to go into town.”

West Enders enjoyed the friendliness of local services and always knew each other by name.

Phil’s practice was busy with local people and workers from the Queensland concrete manufacturer and the glass factory.  George’s Oysters was also a good source of business for Phil. The demographic of his client base changed over time, but it was still short back and sides.
It was common for kids to meet at the intersection of Vulture and Boundary streets. There were lots of fights between opposing gangs, and the wide intersection sometimes became a boxing ring. Phil was only three doors away and was always aware that his shop window was not going to be there the next morning. Broken shop front windows were quite common.

Phil has been with his partner Sandra for the past 20 years. His children have studied and worked in West End. He’s been back to Greece twice to visit his grandparent’s village.

His hairdressing career has been a real success. “Phil the barber” is a household name in West End.

I asked him what he thought about the future of West End and its current development strategy.

“I think that West End has lost its village atmosphere – something that most people came to West End for,” Phil said.

He is disappointed by the late-night drinking that starts when the city goes to sleep. It’s a pretty awful time with flights breaking out frequently.

It’s unfortunate that a significant number of retail shops and businesses have gone.

They were all there when Phil started, now only a few remain.

Recently Phil has moved out of his beloved barber shop after 52 years at 74 Vulture Street.

Phil Apolakiatis is a local legend.