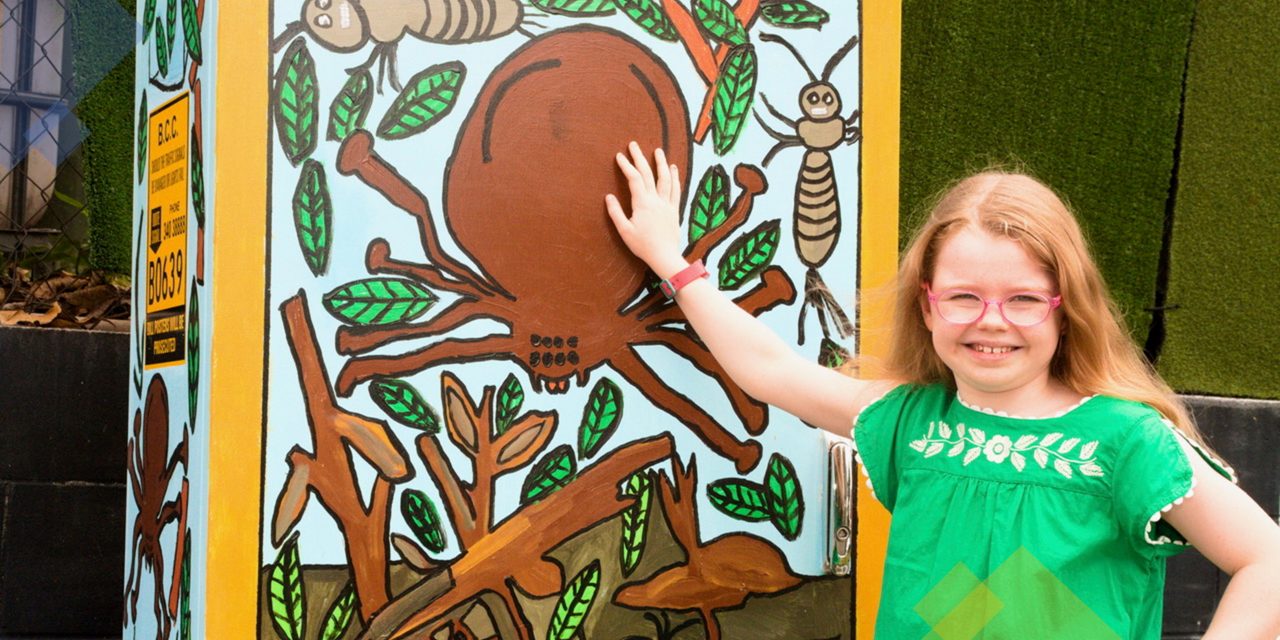 Eight-year-old, year-two student Mary wanted to paint a traffic signal box because she thought it would be fun – the perfect reason!

Her artwork ‘Peggy the five leggy’ is the story of a five-legged huntsman spider that Mary found. She caught it and nursed it back to health on a diet of crickets and grasshoppers. It grew back three legs and now has eight legs again!

Mary’s parents Susan and Tom Nisbet-Smith helped her bring the story to life with her artwork.

Lord Mayor Adrian Schrinner said the awards – held at City Hall on Tuesday 26 April – showcased the incredible works of art painted on traffic infrastructure across the city as part of the Artforce initiative.

“For more than 20 years, residents have been injecting life and colour into our suburbs by transforming mundane traffic signal boxes and Energex transformers into colourful artworks, reflecting the charm and character of their neighbourhoods,” Cr Schrinner said.

“The great thing about Artforce is that it’s open to all Brisbane residents, no matter their age or artistic background and is an opportunity for emerging artists to develop their skills through practical experience in the community,” he said.

“As well as fostering local artists, providing exposure and networking opportunities within the arts community, Artforce brings life and colour to the suburbs, while creating more to see and do in our spectacular city.”

You can find Mary’s work at the corner of Annerley Road & Tamar and Rusk Stree in Annerley.

Artforce Brisbane is a Brisbane City Council community art program that gives local residents the opportunity to paint their original artworks on traffic signal boxes around Brisbane suburbs. Since it began in 1999, the program has welcomed the participation of more than 5,000 volunteers who have painted over 2,295 traffic signal boxes and 64 Energex pad mount transformers.

Every year there are around 80 Artforce Brisbane painting opportunities across the City on traffic signal boxes and a small number of Energex Pad-mount Transformers. Anyone can apply to paint a traffic signal box. To apply, visit www.artforcebrisbane.com.au.