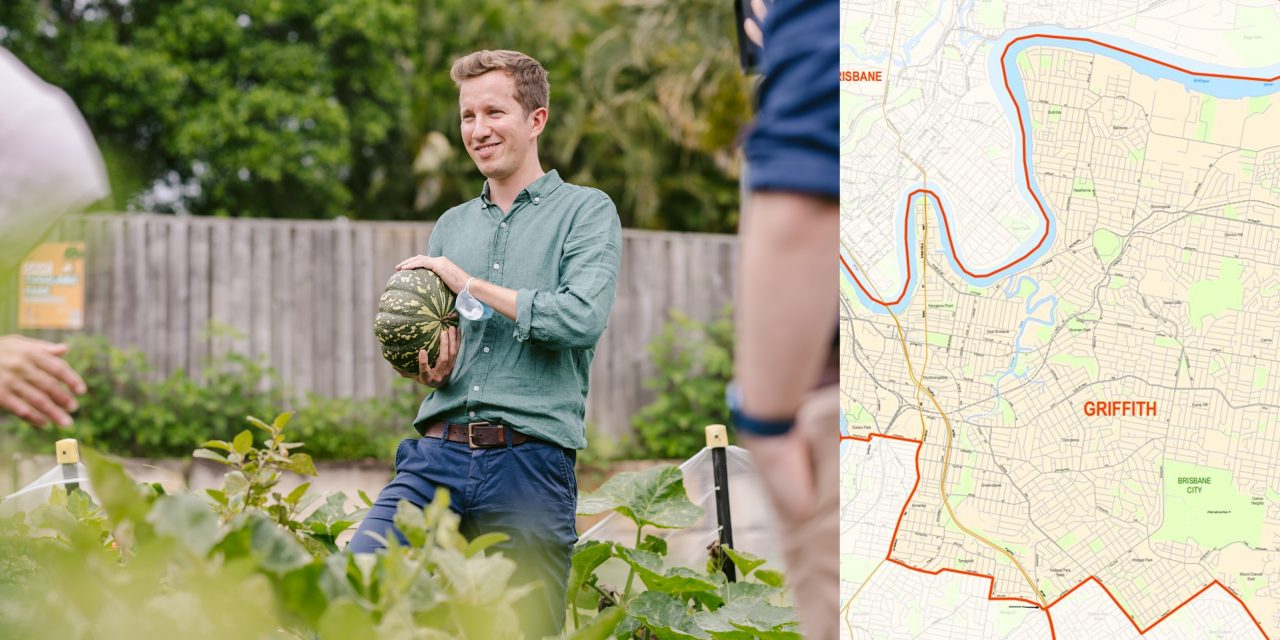 Read the response below from Greens candidate, Max Chandler-Mather.

Mr Chandler-Mather works for The Green party. This is his second run for the seat of Griffith. In 2019 he was ranked second to Labor’s Terri Butler after the distribution of preferences, with a swing of 6.7 % to the Greens. He is hoping to build on that result and considers he is in with a good chance to win the seat.

Background, work/interests, and your key achievements?

I was born in the Mater hospital and grew up on Whynot Street, in West End. I’m currently renting in Woolloongabba with my partner, Jo. I used to work for the National Tertiary Education Union, helping organise and improve the rights of casual and contract workers in research institutes. I have a degree in History (1st class honours) from the University of Queensland and was the campaign manager for Jonathan Sri’s successful 2016 council campaign. I was responsible for drafting and costing the 2017 and 2020 election platforms for the Queensland Greens.

After three years of a pandemic, a flood, rising costs of living, and skyrocketing house prices, a lot has changed for Griffith since 2019. When it comes to affordable housing and climate change there is now almost no difference between the policies of Labor and the Liberals, as they both now support retaining negative gearing, selling off public housing, and expanding coal and gas production. The Greens are now the only party campaigning on a plan to phase out negative gearing, transition out of coal and gas and build a substantial amount of public housing. As a result we’ve seen thousands of people switch to the Greens for the first time in particular over climate and housing.

When it comes to climate, housing, tax, healthcare and education there is very little difference between Labor and the Liberals. Both parties support expanding coal and gas, retaining negative gearing and the stage 3 tax cuts for the super rich, and no substantial increase in health or education funding.

The Greens plan to introduce a 6% tax on billionaires, reverse the stage 3 tax cuts and make big corporations pay their fair share to raise over $500 billion over 10 years. This will fund our plan to:

When the Greens won the lower house federal seat of Melbourne in 2010 we were able to use the balance of power to win dental into Medicare for kids and $13 billion of investment in renewable energy. It’s increasingly likely that the next parliament will be a hung parliament, and if the Greens win Griffith there is a very good chance that we will end up in the balance of power again. We will use that leverage to get dental and mental health into Medicare, stop any new coal and gas, tax billionaires and invest in new manufacturing, affordable housing and renewable energy.

The Greens only need a 3.5% swing to win Griffith, making it the most winnable seat for the Greens in the country. As the difference between Labor and the Liberals shrinks I can understand if you feel pretty fed up with politics. Of course we can’t change everything overnight. But the reality is nothing changes, if nothing changes.

If I win Griffith I guarantee I will fight for you in parliament and in the community. During the floods, I suspended my campaign and worked with Jonathan Sri and Amy MacMahon to provide information, support and assistance in cleaning up. I also joined Jonno and Amy in pushing back against the massive development next to Davies Park. While if I end up in the balance of power I’ll fight to get real action on climate change, dental into Medicare and investment in affordable housing.

Positive change is hard and takes time, but it starts with voting for people who will fight for you and what you believe.

Affordable housing and climate change are the two biggest issues facing residents in Griffith. Skyrocketing house prices and rents are putting massive pressure on existing residents and pushing people away from friends and family, while driving a homelesness crisis. Meanwhile the recent floods gave us a devastating preview of what will happen with greater frequency if we allow Labor and the Liberals to continue to expand coal and gas production and pour fuel on the climate crisis.

The last time the Greens were in the balance of power in 2010, we won dental into Medicare for kids and $13 billion investment in renewable energy. Down in the ACT the Greens have been in government with Labor for the past 12 years. The ACT is the only state or territory where public schools are fully funded and the electricity system is 100% renewable.

Hung parliament is increasingly likely and if I win Griffith then the Greens will very likely be in the balance of power. With that we could go one step further and get dental into Medicare for everyone, a ban on any new coal or gas mines, real investment in public and affordable housing and proper investment in publicly owned renewable energy.