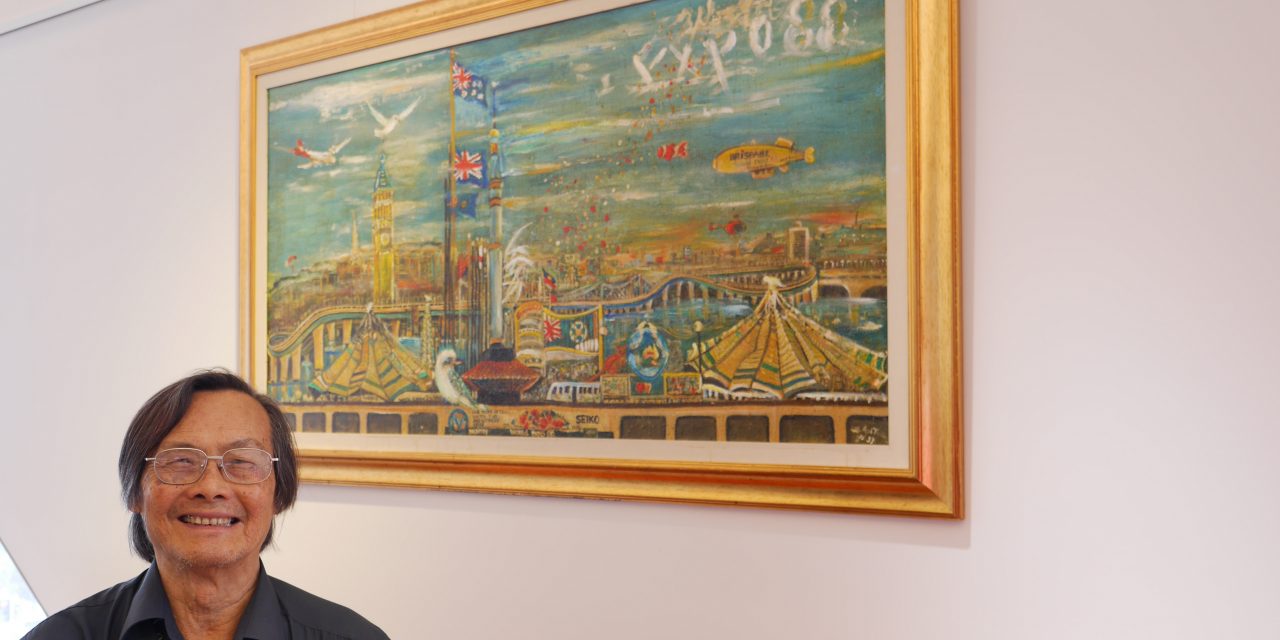 With its rich history and diverse political and artistic life, it is no surprise that West End has been home to a wide range of colourful characters with interesting life stories. Limited space allowed only a few such stories to be told on the recently installed history plaques in Boundary Street. Though important, many of the others go unrecorded. L K Anh Tuan’s story is that of a refugee fleeing his war-torn homeland in search of a better life. He found the possibility of greater freedom here in West End where he has pursued a life of artistic expression since 1983. His work has been exhibited in the USA, Japan and Sydney as well as in Council’s City Square Library and our own local Kurilpa Library. His story is unique but it is also the story of thousands of refugees who have found a more secure life here and who have made our community a better, much richer place.

I came to be writing about L. K. Anh Tuan at the suggestion of his friend Tim Quinn. The intention was that we would discuss a painting Mr Tuan currently has on exhibition at the Brisbane City Square Library. The painting was inspired by the 1988 World Expo and was donated to the City of Brisbane Art Collection by Mr Tuan in January 2019, presenting it to then Lord Mayor Graham Quirk.

We met for our interview at his modest apartment and studio in West End and talked as we shared freshly baked Vietnamese cake and drank artichoke tea – both delicious.

Every wall and flat surface in Mr Tuan’s flat has been given over to the display of his paintings and sculptures. Artmaking is not a commercial enterprise for Mr Tuan, and while he has donated some, he does not sell his art. What emerged during our conversation is that his works are a deeply personal expression of his experiences as a refugee and of his gratitude to the city that he has made his home.

From Vietnam to West End

When he came to Australia in 1982 as a refugee from Vietnam Mr Tuan was a writer, poet and musician. He had written for newspapers, been on radio, and had published books about Vietnamese dance, and one of poetry. The experience of being so deeply immersed in language, where writing is your livelihood, and being dislocated from that culture and language must be a deeply disconcerting one.

Mr Tuan initially came to this city to write for a Vietnamese language newspaper. But his ambitions were broader than that, and he did not stick long at the job. He says that he did not want to write for a paper and his Vietnamese reading audience in Brisbane was small, and so he turned instead to art – a form of expression that can reach beyond the limits of language. And yet there is still something of the storyteller in his art. Mr Tuan’s paintings are in a sense pictorial stories, composed of an assemblage of elements, often incorporating words, sometimes in Vietnamese and in English.

Like many of his paintings, the World Expo image hanging in the Brisbane City Library tell us a multitude of stories. The viewer looks towards the new Brisbane with the central sky-needle and South Bank adorned with pavilions and the monorail, and across the river is the older Brisbane with the City Hall Clock tower in the background. A kookaburra sits in in the foreground, while a white bird (is it a dove?) ascends from the clock tower, larger almost than the aeroplane and the blimp it is joining.

I asked Mr Tuan why he was inspired to paint about the Expo. He said that he first began to paint in 1984, and then was accepted into the Brisbane College of Art in 1986, and in 1987 he was sent to study English in a building near where the expo was organised. These events linked him to his new city as it embarked on its new Expo adventure. A man and a city, finding their way in the world. 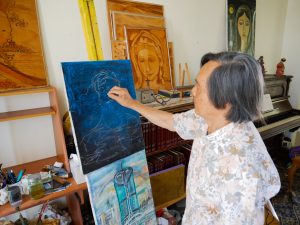 Mr Tuan says he sees being an artist as his destiny rather than his profession. He has collected his artistic journey into a volume titled, “From my cultural journey to my birthplace”. Reading the book and looking at his home filled with years of paintings, I begin to sense the need to keep these paintings together. They are the story of a life: they belong with one another and with their maker.

Through changing styles over decades, the thread running through Mr Tuan’s art connects his lived journey, his birth, the loss of his father, fleeing to Saigon as a teenager, and then from Vietnam to Malaysia and eventually to Australia as an adult.

Place also seems to be an important element in Mr Tuan’s paintings. Many of his paintings depict West End. There are paintings of Jane Street Community Garden in flood, of the lizard in Boundary Street, the Rialto Cinema in Hargrave Road, and of the markets in Mollison Street. Images that are immediately recognisable to anyone who knows West End.

But the images that engaged me are somewhat darker and more obviously autobiographical. They speak of the sadness and pain of dislocation. Two struck me in particular.

One painting from 1992 is titled “My autobiography”.  The image depicts a pregnant Vietnam cradling an as yet unborn Tuan. Mr Tuan writes of this painting that the Vietnam War, “completely destroyed my childhood”.

“This painting describes the effect of 30 years of the Vietnam War on my life (1946-1975). I was born in 1940 when the Second World war was already one year old the Vietnam War completely destroyed my childhood. I had to escape from the safe corner of my childhood when I was only 6 years old. In 1954 I migrated to the South when Vietnam was divided into two countries. I lived in Saigon for 20 years from 1954 until 1975 but I had to stay living under the communist regime until 1982 before I could escape to the refugee camp of Pilau Bidong. I spent up in 15 days and nights on the treacherous South China Sea before arriving in the refugee camp and eventually to life in exile here in Australia,” from Saigon: Sea of Remembrance. 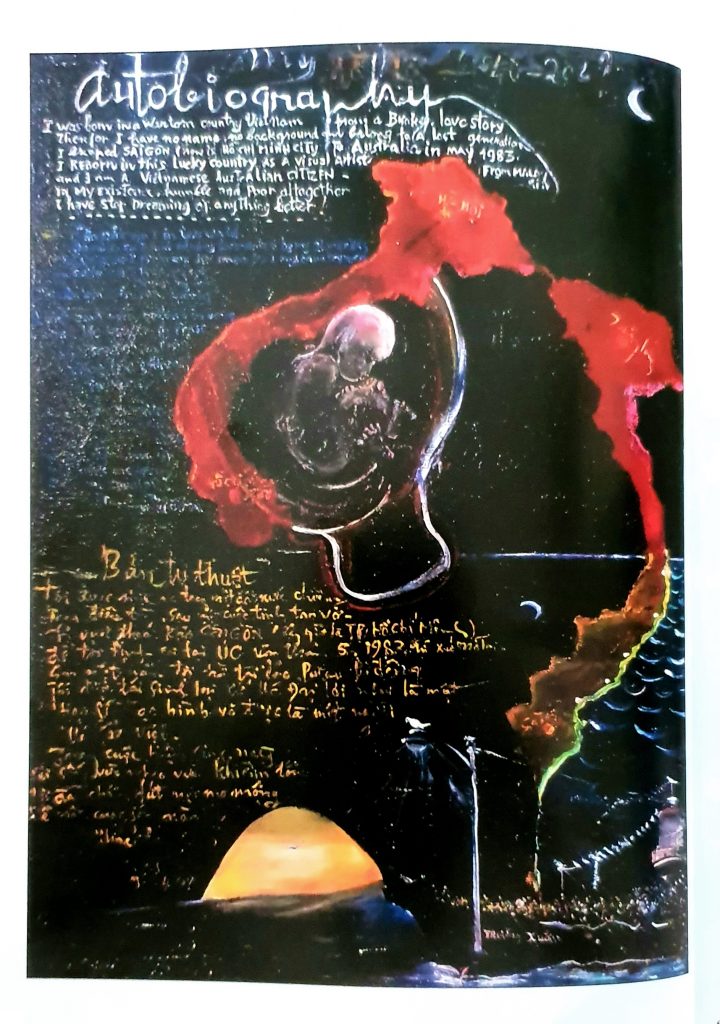 The other was painted in 1990, depicting his face turned to stone. A theme he has revisited more recently.

“When Saigon fell – my heart and mind were broken into pieces. Half for Saigon in half for Australia, my freedom land. Therefore, my face turned to stone. The stitching of the two faces of my heart and mind from my second homeland precipitated a state of mental crisis for me. In one way I tried to assimilate as a real Australian citizen, but in another way, I could not reject who I was, a real Vietnamese. The pressure of creativity became a big challenge. I clung to my traditional culture and at the same time I had to accept the new culture of the place where I was living”, from Saigon: Sea of Remembrance. 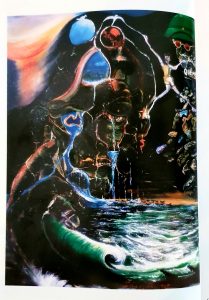 Mr Tuan would like to leave his life works to the Queensland Museum – a gift of gratitude to the people of Queensland. After all, his story is our story too.

You can read more about Mr Tuan and his art in the following:

Thank you to Mr Tuan for inviting me into his home and for being so generous with his time, and to Tim Quinn for suggesting this story.