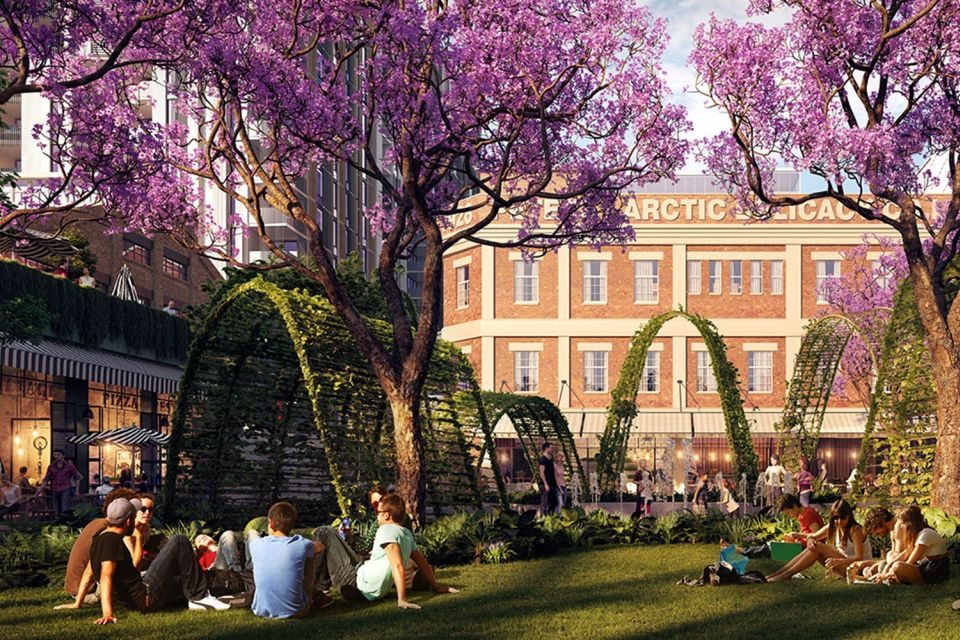 The West End and West Village communities will soon be able to enjoy a new green oasis and water play area on Boundary Street, following the lodgement of a development application with Brisbane City Council.
Sekisui House, developer of the West Village project, has lodged the application to commence work on the project’s first major public open spaces, including a 1500m2 public park.
The application meets various conditions of West Village’s November 2016 Preliminary Approval that established the overall framework and concept for the development. West Village Project Director Andrew Thompson said the new works would include:
• The Boundary Street Public Open Space Area, to be known as The Common
• Two publicly accessible laneways – Factory Lane and Wilson Lane, and
• A dedicated community space
“West Village proposes to have these spaces open to the public by the end of 2018 with the completion of our first two residential buildings – it is not typical for this amount of green space to be delivered so early in a project,” Mr Thompson said.
“These parkland and community spaces will create a point of difference for West Village by providing open green spaces in the inner-city for residents to enjoy.
“Being just 1km from the CBD, and with our surrounding heritage buildings, green laneways and extensive retail amenity – including a full-line premium Woolworths – West Village is an opportunity that can’t be repeated, which is why we receive continued interest from people wanting to live here.”
Mr Thompson said West Village adopted a number of guiding principles for the new works, including the preservation of the heritage listed factories which must be celebrated and assume pride of place within West Village; the creation of a public places that are active, 24 hour spaces to encourage public engagement and activation; a sub-tropical public place; and spaces that are connected, engaging and safe.
Mr Thompson said The Common would reinstate the historic forecourt of the 1920s Peters Ice Cream Factory.
“We are about to breathe new life into West End’s Ice Cream Factory as a residential and retail precinct, and The Common will be a cool, green entry statement that embraces the heritage listed building,” Mr Thompson said.
“The Common will be a 1,585m2 24-hour public space designed to draw in pedestrians and provide a focal point for the residents of West Village and the broader West End community.
“The Common will offer a cool oasis and will include lush, colourful and sculptural plants as a contrast to the urban surrounds.
“Grassed areas will provide a setting for viewing performances, picnics and small gatherings, and tall trees with a diverse canopy will provide a cool sanctuary full of colour and texture.”

The Common will also feature a water play area adjacent to Boundary Street, including popwater jets to “add moving water, sound and additional interest to the landscape”.
Mr Thompson said the proposal also included the development of Factory Lane and Wilson Lane – the first of four, 24 hour public laneways at West Village.
“Both laneways will include deep plantings, landscaped market gardens and innovative lighting,” Mr Thompson said.
“Wilson Lane will extend from Wilson Street, running alongside the heritage listed Ice Cream Cone Factory, and will include 10 bicycle parking stands.
“Factory Lane will be built between the Peters Ice Cream Factory and our first two residential buildings and will be a vibrant, green laneway connected to The Common.”
The new works will also include a community space, to be known as the Centre Activities Space, for uses such as an art gallery, formal or informal educational seminars/lectures, acting classes, conference or reception space, fitness classes, dance classes, theatre or cinema.