What is the Religious Freedom Bill and why are people protesting? 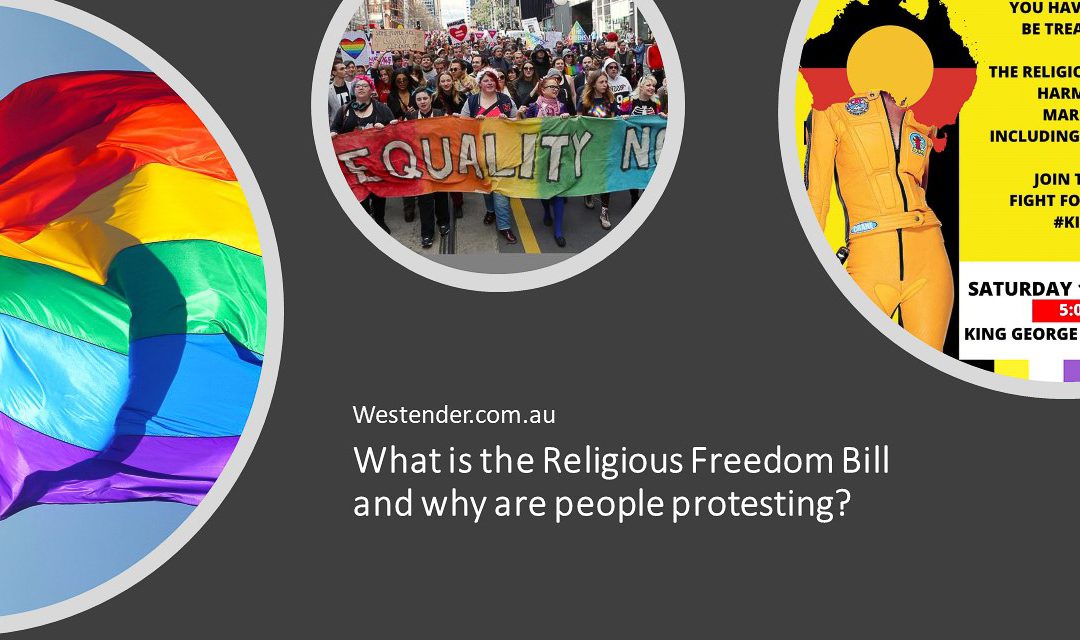 What is the Religious Freedom Bill and why are people protesting?

On Saturday 1 February at 5.00pm people opposed to the Religious Freedom Bill will be protesting in Brisbane at a Kill the Bill rally.

Following the national vote supporting same-sex marriage in 2017, the Coalition initiated a review, led by Philip Ruddock, into religious freedoms in Australia. While it found no threat to religious freedom, the Government drafted a bill and released the first exposure draft in August 2019.

Following significant push back, mostly from religious groups wanting strengthened protections, a second exposure draft was released on the 10th of December 2019.

The purpose of the proposed bill is to protect religious institutions and prohibit discrimination on the grounds of religious belief or activity.

Why are people protesting?

LGBTQI+ groups consider that the proposed laws allow for legal discrimination against LGBTIQ+ people, as well as people with disability, women and people from ethnic and religious minorities.

Parents and Friends of Lesbians and Gays (PFLAG) say that the Bill, “explicitly overrides existing protections from federal, state and territory anti-discrimination laws through a new carve-out for a ‘statement of belief’. This will leave LGBTIQ+ people in a legal ‘grey zone’ where harmful statements founded in religion may be privileged over the freedom from discrimination at work and at school. For example, calling a transgender person by their previous name or gender could be protected if founded in a religious belief, even though this may be unlawful discrimination under current Australian laws.”

One of the most controversial elements of the proposed bill allows doctors and pharmacists to refuse to perform certain procedures or dispense certain drugs – such as abortion or the morning after pill – provided they refused to do so for all patients.[i]

The LIV has warned that the Religious Discrimination Bill could lead to patients being denied medical care and public hospitals breaching their duty of care : https://t.co/L5DH3fUdkx. #auslaw pic.twitter.com/SPvNb5GLTA

Examples provided by Equality Australia of the sorts of discrimination this bill will allow, include:

How are people responding?

A number of groups representing lawyers have raised concerns about the draft bill.

In its submission to the Government, the Australian Lawyers Alliance (ALA), says that, “the proposed legislative reforms will have the effect of prioritising religious rights over all others, with the inevitable effect of weakening existing discrimination protections for women, people with disabilities, people from culturally and linguistically diverse backgrounds, and Gay, Lesbian Bisexual, Transgender, Intersex and Queer (GLBTIQ+) people”.

Second draft of proposed religious discrimination bill allows religious belief to be used as a cloak for sexism, racism, homophobia and other prejudices. It is not acceptable.
Read our submission here: https://t.co/F45BIdt7Wehttps://t.co/PzW5wDj5s8

Not all church groups support the proposed bill. The Uniting Church for example, is advocating for greater protections for vulnerable groups.

The Australian Greens have been part of the campaign to defeat the bill from the time the first exposure draft was released.

Greens oppose the religious discrimination Bill in its current form. The government would need to radically change it before we could support the Bill when it’s presented to parliament. #Greens #auspol

The Labor opposition says it was not consulted on the draft bill by the Government and is consulting across the Australian community, including with religious organisations, LGBTI groups, disability advocates, legal experts and other organisations while they consider the exposure drafts.

Opposition Leader Anthony Albanese held a Religious Freedom roundtable with representatives, including from LGBTQI groups, in Melbourne this week.

QNews reported that, “Anthony Albanese didn’t commit Labor to opposing the bill. However, he did hear arguments against it from some of Australia’s most influential advocates”.

Brisbane Rally organiser Johnny Valkyrie said that Queensland Rainbow Labor is, “extremely proactive”, however, he says the Federal Opposition could do more. He told The Westender that he has written to Labor leader, Anthony Albanese requesting a Brisbane roundtable, and he encourages others to do likewise.

“Albanese didn’t commit Labor to opposing the bill. However he did hear arguments against it from some of Australia’s most influential advocates. If, before the mtg, he held out any hope this bill is redeemable, he won’t any more": @RodneyCroome #auspol https://t.co/FbCT448hv8

The Brisbane Rally will commence at 5.00pm at King George Square and make its way from there to Parliament House (Speakers Corner).

The Brisbane Times reported recently that Brisbane City Council has prohibited the use of amplification at King George Square. However, organiser Johnny Valkyrie advised The Westender today that the Queensland Police have advised him that the rally can use speakers, and so speeches will be delivered in King George Square, as originally planned, prior to the march.

[ii] The Westender is seeking comment from Brisbane LNP MP Trevor Evans about his supports the Religious Discrimination Bill.

For details you can link to a copy of the second draft Bill’s recent changes HERE: