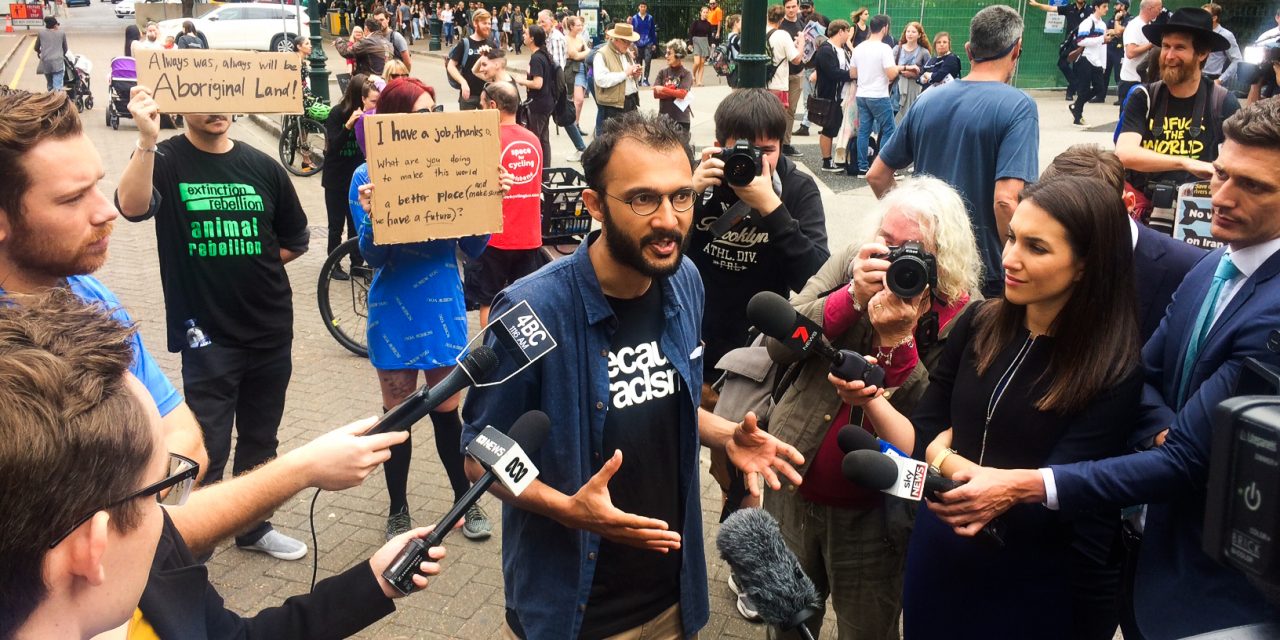 Yesterday Brisbane’s Lord Mayor Adrian Schrinner attempted to use the Brisbane Magistrates Court to block a “Right to Protest” demonstration organised by The Gabba Ward Greens Councillor, Jonathan Sri.  The Court rejected the Lord Mayor’s case, and the protest proceeded today, as planned.

Commenting on the outcomes of the Court case, Cr Sri said,

“…we mustn’t take our civil liberties for granted. The State Government is still trying to water down our right to peaceful assembly”

In an interview on Sunrise today, Mr Sri said that, “the State Labor Government is teaming up with Liberal National Party, to introduce very coercive laws that we haven’t seen since the Bjelke Petersen era.”

The State Government has recently announced new laws making it an offense to possess devices used for ‘locking on’ at a protest, giving Police the power to search a person or vehicle suspected of possessing such devices.

Brisbane commuters are expected to face lengthy delays as climate change activists shut down the CBD once again. pic.twitter.com/vGvDDWbyCR

Michael Cope, President of the Queensland Council for Civil Liberties (QCCL) has also welcomed yesterday’s decision by the Magistrate’s Court.

“The Council (QCCL) welcomes yesterday’s decision by the Chief Magistrate to reject the Brisbane City Council’s application to prohibit the protest march in the city this morning,” Mr Cope said.

The QCCL said the decision was made under the Peaceful Assembly Act 1992, which was introduced to bring an end to the arbitrary and undemocratic laws which existed under the Bjelke Petersen regime.

Mr Cope said that the intervention by the Brisbane City Council before the Court was a political stunt by the new Mayor of which former Premier Bjelke Petersen would have been proud.

“It is clear, that there is a right to peaceful protest in this State. Sometimes, when rights are exercised in a democracy other people are inconvenienced. That is the price that we pay for having a democracy,” Mr Cope said.

The QCCL calls on protest groups to respect the legal arrangements and to apply for permits. Those applications will allow relevant government authorities to plan for the events and to minimise disruption and inconvenience to other individuals.

Equally, the QCCL says, the police have an obligation to facilitate protest.

“Having said all that, the Peaceful Assembly Act is not perfect. In 2017, the Queensland Court of Appeal held that protestors with a permit are still subject to council regulations in the mall. We say that this should be amended so that the final decision as to what restrictions apply to protests in Brisbane City Council malls, is made by the Magistrate. This will take that decision making process out of the hands of politicians” said Mr. Cope.

The QCCL recently commented on the State Government’s proposed new stop and search Police powers reported by The Westender on the 20th of August. See that story Here.