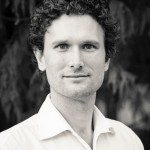 Dr Cameron Murray takes a peek inside the shady world of planning decisions in Queensland, and wonders whose interests are being served.

Town planning systems should coordinate our city development in the public interest, guiding development in socially desirable ways; ways which have been established by decades of research and analysis of the most functional, attractive, and popular cities of the world.

More often than not, however, these systems are run for the economic interests of political mates, who utilise the various discretionary elements of the planning system to give themselves massive economic gains. These gains come at a cost to the public, and undermine the social benefits desired by the planning system.

Between 2012 and 2014, I undertook the largest ever study on the political determinants of rezoning decisions to see just how this game is played, and what it costs the rest of us. Using six major planning decisions undertaken by the Queensland government agency, the Urban Land Development Authority, (ULDA) I looked at the characteristics of landowners who were rezoned, and landowners adjacent and across the road, with comparable sized properties that could have been rezoned, but weren’t. As you might have guessed, the landowners who were rezoned were quite different to those that missed out.

The graph below shows the proportion of landowners in my total sample, both inside and adjacent the rezoned areas. If you were a landowner with connected relationships – common business connections, member of lobby groups, directors with business connection to the ULDA board – you were far more likely to be rezoned. 60% of the rezoned landowners were connected. 90% were clients of professional lobbyists, and in fact, the lobbyists had a 100% success rate, with no landowners who employed lobbyists missing out on the rezoning. They clearly earn their fees in Queensland. And 70% of rezoned landowners were political donors. More interesting is that these donor mostly donated to both sides of politics – they were “equal opportunity” donors. 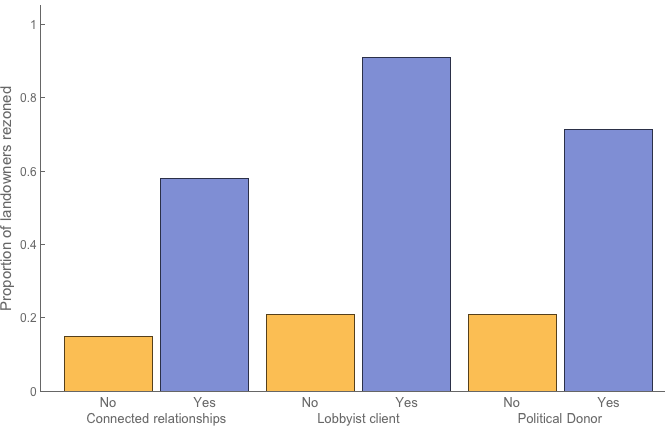 My results confirmed many suspicions about how planning in Queensland truly operates. What is more, I was able to calculate the size of the economic gains given away to these well-connected landowners. The rezoning decisions increased the value of all the land inside the boundary by $710 million, and of that, $410 million went to the connected owners. Our public institutions are very generous. In the course of this research I identified three core ingredients in political favouritism, all of which the Queensland planning system has in spades. The first is that there must be a honeypot; a valuable economic gain able to be given to private entities with a degree of discretion about who receives it. The second is that there must be loyal group of mates who are able to sustain an implicit system of trading favours. And third, there must be a plausible cover story to lets the public believe that this trading of favours is in the public interest.

Honeypot
The honeypot arises from the many discretionary decisions in the planning system. Where developers seek to exceed codified limits, such as height and density restrictions, they are able to mount an argument that exceeding these limits improves overall outcomes for the community. Councils have a massive amount of discretion over the interpretation and acceptance of arguments developers make. Worse, under the new planning laws recently passed in Queensland, the person making these interpretations can now be chosen by the developers themselves. This is the opposite of ensuring independence over discretionary decisions.

We can remove the honeypot by charging for additional rights given to landowners and developers through the planning system. Such a system has been successfully implemented in the Canberra since 1971. They charge landowners 75% of the value gains from the higher value uses they undertake. They also do not allow private developers to convert land from rural to urban uses, ensuring a public agency captures these value gains as well. The ACT raised $183 million from these systems last year. Scaling up, that could be $1.8 billion in revenue in a single year to the Queensland government and councils that is currently given away to landowners through planning decisions.

Loyal group of mates
The second ingredient is a loyal group. Handing out favours is only politically expedient when you get something in return. By establishing trust, a loyal group, through common membership of clubs and industry groups, family and business connections, and by signalling your intention to reciprocate with political donations, politicians and other group members, are able to give favours knowing they will receive them in the future. Instead of taking direct bribes for each decision, they simply give favours to other group members, who later reciprocate amongst themselves, ensuring that any wealth diverted to the group is eventually widely shared amongst all members. This is a mafia-like system, and indeed, my study showed that the relationship network structure of the Queensland property developers was almost identical to that found in other studies of the US-Italian mafia.

We can tackle this problem by making it more difficult to return favours, such as extending cooling-off periods for politicians. At present Queensland politicians are able to walk out of the government office on Friday, and into their new office at a developer on Monday, and almost every influential politician in the state at all levels has done just that. We can also improve requirements for the independence of those in the planning system making the discretionary decisions, perhaps drawing on foreign planning experts who rotate into the position for a short time.

Myths
Lastly, the pervasive myth widely promoted by the loyal group of mates is that without rezoning and removing costs from developers, no housing will be built. This is utter nonsense. The best way to get development built is to put time limits on planning approvals and harsh penalties for not meeting the promised new housing supply within the limits. In my study, one developer who claimed they would solve the mythical housing shortage proceeded to then market to their investors that their development would take 30 years to build. The group of mates use these myths as cover stories to deflect public scrutiny of their actions.

In China, if developers don’t build what they promised in a timely manner, the land reverts back to the ownership of the government. The ACT has similar controls. Queensland could have them too.

This glimpse into the shady world of planning and development in Queensland suggests that the main challenge for creating beneficial change in the planning system is that the system itself is now run by insiders in a game of favour-exchange. It will take aggressive public action and protest to first battle the myths, to then expose the favours, and finally propose better systems an find the political levers necessary to get the passed.

Dr Murray is an economist with a passion for improving society and cutting through the noise to find the real signals in public policy. Specialist areas include environmental economics, rent-seeking and corruption, and property markets.He currently consults privately, and writes for MacroBusiness, Evonomics.com, and maintains an internationally renowned personal blog called Fresh Economic Thinking. Dr Murray lives in West End and you can find him on Twitter @rumplestatskin.