Sam cuts through the bullshit 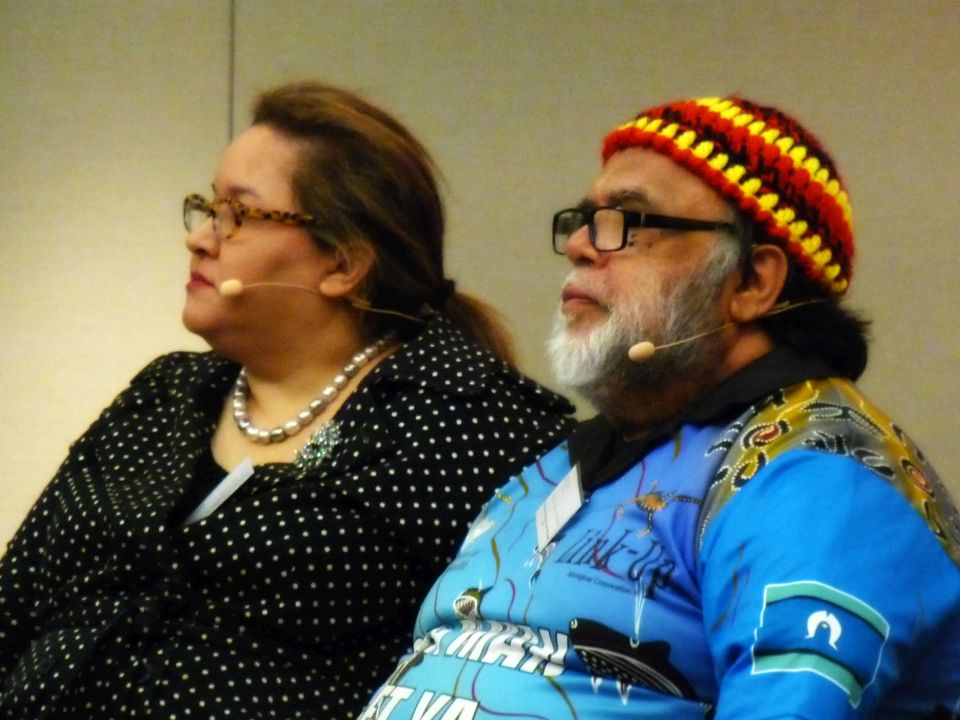 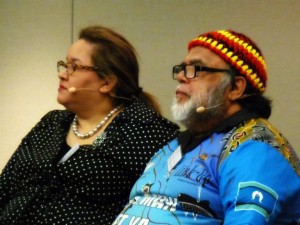 There are some who would say that the colonisation of Australia was a relatively peaceful affair, where a primitive Stone Age culture simply melted away in the face of superior Western civilisation.

As recently as 1982, a prominent British critic (in reviewing Judith Wright’s “The Cry For The Dead”) could say in all seriousness “…it was emphatically not an extermination. It was the inevitable result of a collision between civilized Europe and the stone age.”

Noted community activist and Chairperson of Link-Up Aboriginal Corporation (Qld) Sam Watson is having none of that. Wearing his metaphorical black armband with pride, Sam has fought hard and long to bring to light the dark history of violence, murder and massacre that accompanied the invasion of Australia and the dispossession of its original inhabitants.

Sam recently took part in a high powered symposium to mark the 150th anniversary of the Queensland Parliament passing legislation requiring armed police to ‘disperse any large assemblies of blacks without unnecessary violence’.

These euphemistically entitled ‘dispersals’ were generally carried out by the Native Mounted Police under the command of white officers, and had dire consequences for the original inhabitants of Queensland.

The symposium was conducted by Caxton Legal Centre and was held, with delicious irony, in the Premiers Hall of Queensland Parliament where portraits of the bewhiskered Colonial premiers who passed the original legislation peered down on proceedings. 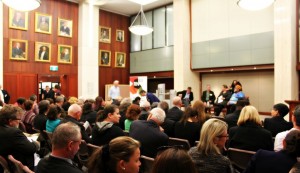 The symposium was moderated by Paul Barclay of ABC Radio National, and examined how the present day reality of Aboriginal people in Queensland continues to be shaped by their violent encounters with the Queensland colonial police force.

Other panellists were Professor of Law Megan Davis, Expert Member of the UN Permanent Forum on Indigenous Affairs and Professor Mark Finnane, ARC Laureate Fellow and Professor of History at Griffith University.

In his opening remarks, Hon Curtis Pitt MP, Treasurer, Minister for Aboriginal and Torres Strait Islander Partnerships and Minister for Sport, said that the tragic history of native police has been well documented, but the general public remains largely ignorant.

“We must continue to reflect on the injustices of the past,” said Mr Pitt, “so we can move forward together.

“People in this state do care,” he said. “We want to recognise past injustice, we want to close the gap.”

According to Professor Finnane, perhaps 800 to 1000 troopers served, many of whom were forcibly recruited, blackmailed, or remanded from prison to serve as native police.

“Native police gained access to firearms, horses, wages, and some prestige,” he said.

“Settlers pushing out beyond borders faced native resistance, and called for support from the government.

“The Native Police were fundamental to the success of settlement of Queensland.”

At which point, Sam Watson could not help but interject.

“People talk about settlement and colonisation, but it was war on the blacks and genocide,” said Sam. “You can dress it up however you like, but that’s just bullshit!”

“Until Australia recognises that they’re living on the blood of the Aboriginal people, on land they stole, there can be no reconciliation.”

Megan Davis agreed. “Most Aboriginal people accept that it was genocide,” she said, “but to be frank Australians just aren’t concerned about human rights.

“The evidence suggests that the intent was there,” said Megan, “that the settlement of Queensland was based on taking land and killing people.”

Mark Finnane pointed out there was a hidden history of killings by settlers, too, that it wasn’t just the Native Police.

“One of the functions of the Native Police was to limit the violence that was occurring,” he said. “They were trying to regulate relations on the frontier, trying to achieve harmony in the wake of dispossession.”

Mark Finnane suggested 10,000 to 60,000 as the proposed number of Aboriginal people killed in Queensland, extrapolated from available statistics and records.

“In Queensland it was particularly bad,” he said.  “There was rapid expansion ahead of civilisation, with waves of settlement racing ahead of the law.”

“Law was used to legitimise mass murder,” he said. “Not one person was held criminally responsible for their behaviour. To this day not one white fella in uniform has ever been held responsible for the death of Aboriginal people in their custody.”

Sam said that his community operates on a verbal dynamic. “Stories are still told, re-enacted in song and dance, these are living stories in our culture.

“White Australia has never apologised for invading our country and murdering our people.

“The genocide goes on,” he said. “Aboriginal men and women are still under attack. Intervention is warfare by other means.

“To the victors go the privilege of writing history and that’s what happened in Australia.”

Megan Davis said that denial and silence about the frontier violence is holding us back.

“Most people don’t know,” she said, “it’s not being taught in schools.”

Mark Finnane said that the history wars continue unabated, with even more evidence, books published, and research papers released documenting the history of the frontier wars and Aboriginal massacres.

“There’s a major role for major cultural institutions, museums and the like, to be more active in telling the story,” he said. “Creative leadership and initiative is needed to tell these stories.”

And for the future?

Sam Watson wants a panel of Aboriginal elders to review the evidence and lay indictments against those responsible.

“Our reconciliation process is regarded as quite spurious internationally,’ she said. “Reconciliation Action Plans are seen as token gestures.

Mark Finnane believes that an apology from parliament is called for, and that our cultural institutions need to tell the story.

“We’ve only scratched the surface of an important discussion,” he said.

The symposium will be broadcast in full in a forthcoming episode of ‘Big Ideas’ on Radio National.