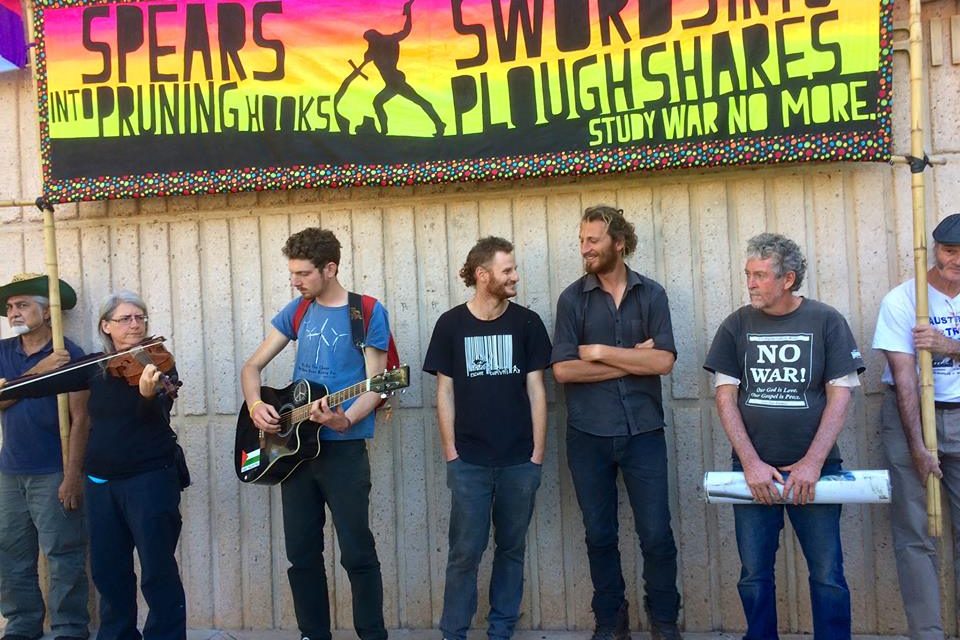 Local peace activist Jim Dowling and five other protestors are set for trial in Alice Springs next month, charged with trespass at the Pine Gap military base.

Jim and his co-accused are calling for financial support for proper legal defence and to cover the costs of subpoena-ing expert witnesses from around the world.

In Early November six of us go to trial in Alice Springs charged under the notorious “Defence Special Undertaking Act” which carries a maximum sentence of 7 years for trespass.*

This is only the second time in history this 1952 law has been used. The first time, after a similar action when some of us actually climbed on the roof of a building inside Pine Gap, resulted in fines despite the strongest effort by the prosecution to get us jailed.**  This is their second chance.

As we did last time, we once again hope to put the real criminals on trial – those who would wage wars of aggression, declared “the supreme war crime” by Chief Justice Jackson at the Nuremberg trials.

I have just finished reading a book by David Rosenberg who worked at Pine Gap for 18 years, analysing satellite intelligence for the US war machine. It is a poorly written, boring book in many ways, but macabrely fascinating in the way Rosenberg can see no possible wrong in any of his work. He sees only good. He has helped save – lives of US and Australian soldiers (a fact he mentions over and over). Even the concept of “collateral damage” does not exist in this man’s mind.

Rosenberg regales us with his outstanding citizenship in Alice Springs community groups. He intersperses this with information about his work including some of the wars Pine Gap has helped support. He generally does not discuss the results of these wars, but in a few lines he dismisses the notorious 1991 “Highway of Death” (google it), justifying the mass murder of thousands of utterly defenceless Iraqi soldiers fleeing Kuwait to Iraq (in accord with the UN resolution). Rosenberg calmly justifies their horrific slaughter with the claim that the victims had behaved as “unprofessional soldiers” in their occupation of Kuwait. Rosenberg makes no mention of the devastation of Iraq – more than a million Iraqis killed; millions made refugees- but expresses horror (more than once) on hearing about a US fighter pilot being shot down. He excitedly writes of his and other Pine Gap operators’ heroic efforts to find this pilot. There are cheers all round in the Intel offices. There is no mention of the countless women and children killed by US pilots’ missiles, cluster bombs, fuel air explosives, DU rounds. “Collateral damage” does not rate a mention. Not even once.

Rosenberg’s book exposes the “Banality of Evil” surrounding Pine Gap and Alice Springs. I cannot help but contrast this with the other book I am reading, Robert Fisk’s 1200 page opus “The great War for Civilization” which exposes war in all its unbridled horror.  Fisk covers much of the same ground, but you would never know it. Fisk tells the gruesome details of the end results of much of the Intel of places like Pine Gap. Unlike Rosenberg, FIsk does not seem to see any difference between a body vaporised by a Plane in New York or a bomb in Baghdad , a US or Aussie soldier or an Arab, or Persian.

Fisk reveals information I had forgotten or never registered the import of. When he details once again how the US supported Iraq in the war against Iran, especially in supplying intel on Iraq’s troops, I immediately think of Pine Gap. Fisk details the horror of a decade of poison gas attacks on Iranian troops with intel supplied by the US. Was some of this Intel supplied by Pine Gap? Almost certainly. The US and the entire world turned a blind eye to over ten thousand Iranian troops gassed by Sadaam. It was only when they needed an excuse to invade, did the US (and our own government) suddenly find the gassing of 5000 Kurds a great evil. (Most Americans and Australians still do not know about the gassing of Iranians).

The selective vision of the US government and Rosenberg is understandable. One needs to maintain its powerful empire and the other needs a job, and petty power and privilege working for that empire.

So we got to court in Alice Springs once again to speak truth to power. The truth is Pine Gap is not a benign establishment, just gathering information and occasionally helping rescue downed pilots. It is an essential part of a war machine that has been responsible for untold slaughter.

In court we will call expert witnesses: Richard Tanter, (President of ICAN which was recently awarded the Nobel Peace Prize, as well as an expert on the military role of Pine Gap); former Greens senator Scott Ludlum who has campaigned against Pine Gap’s role in War making for many years; Lisa Ling long time Drone Operator for the US military has agreed to appear by video link from the US, to expose Pine Gap’s role in Drone warfare; Ray McGovern CIA analyst for 27 years has likewise agreed to a video link appearance.

It is also my hope if we can raise enough funds to subpoena David Rosenberg to give evidence about the admissions he made in his book about the role of Pine Gap. And of course explore the implications that he failed to mention.

PLEASE CONSIDER A DONATION TO HELP WITH THE COURT CASE. WE ARE NOT PAYING LAWYERS (LEGAL HELP HAS BEEN FREE OR THROUGH LEGAL AID). BUT THERE ARE MANY OTHER EXPENSES INCLUDING THE ABOVE.

If you don’t have one, we are happy to send you a copy of the RISE UP CD, made to support the first trial. It contains a great collection of anti-war songs from Aussie and overseas artists. Just ask.

* More info on our action:  https://closepinegap.org/