Promises, promises… but the devil is in the detail 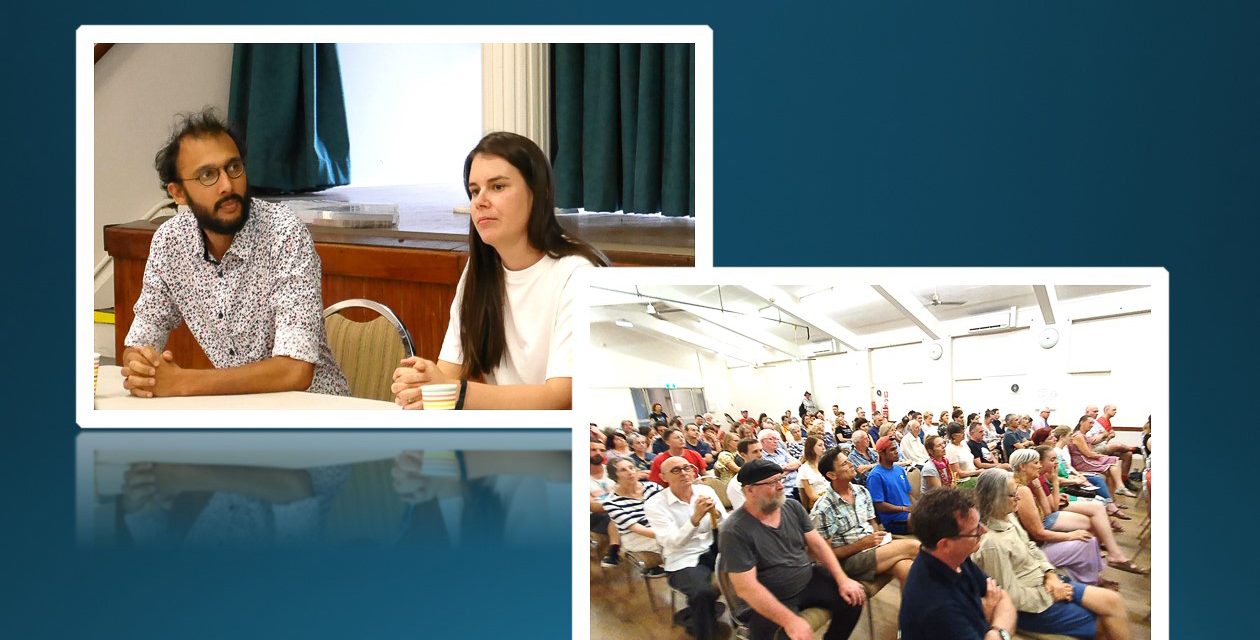 On the afternoon of Saturday 7 March, Kurilpa Futures hosted the first of the candidates’ forums in West End.

The event was well attended, questions were thoughtful and responses well-argued by the two attending candidates, Jonathan Sri for The Greens, and Labor’s Rachel Gallagher. In fact, so much so, that a number of people commented to me after the event that having such quality candidates, with such similar concerns, makes their voting decisions difficult.[1]

They do differ somewhat is style however and in the details of their policy positions.

Cr Sri, perhaps with the advantage of incumbency, is more likely to have a definitive position on issues, while Ms Gallagher will call for further consultation and investigation. For some this signifies strength on the part of Cr Sri and hesitancy on the part of Ms Gallagher, but others have told me that they think this indicates that Ms Gallagher has a more nuanced grasp on the complexity of the issues confronting Council.

The first question to candidates on Saturday concerned global warming.

Both candidates agreed that the current planning scheme does not work for residents and requires serious review.

Cr Sri said at the Saturday forum, “…both of us have quite similar positions in terms of our criticisms of the current neighbourhood planning process. We want more sustainable planning and we want the community to be generally involved. We want better designed buildings. … I think really where we depart is around the mechanisms that we are proposing.”

Both Labor and the Greens are also taking commitments to the election for binding height limits on new developments. However, Ms Gallagher said, “I think we get quite caught up with height limits, because it’s kind of an easy concept to grasp. … the real soul of the city actually dies on the ground. [Apartments] are not vibrant urban areas, they are parking lots with apartments on top of them”.

Both candidates also agree that Council is not meeting local requirement for greenspace and transport infrastructure, and it is around the funding mechanisms for these amenities that the two depart.

Both candidates cycle, although Ms Gallagher said her cycling has been curtailed for safety reasons now that she has a small daughter. Space for Cycling attended the event and provided the following post.

Thanks to Kurilpa Futures – Planning for People for arranging a Gabba Ward candidates forum this afternoon, and to…

Posted by Space4cyclingbne on Saturday, 7 March 2020

Jonathan Sri said that cash for access meetings with politicians, “… are a blight on our political system… I think they should be illegal”. He said that both the major parties are complicit in this, “but in recent years, we’ve seen particularly the Queensland Labor Government take tens of thousands of dollars in donations from big corporations, including developers like Star Entertainment, that are building the mega casino across the river”.

Rachel Gallagher had perhaps her strongest moment in response to this question. Rather than prevaricating as is so often the case when candidates are uncomfortable with their party’s positions, Ms Gallagher made an unambiguous statement rejecting all forms of political donation, saying, “I think that we should ban all donations. And that’s what I will continue to advocate for until it’s done.”

Ms Gallagher said that the Labor Party is not perfect, “there’s no political party that is perfect. But it’s through the hard work of the members inside, you know, I don’t want to burn the house down I want to fix the house, I want to repair the house”.

A questioner asked how the candidates would ensure the city meets the needs of women.

Both candidates talked at some length about Boundary Street and included a number of ideas for its rejuvenation, and both agreed that Council has been neglectful of the precinct.

The Greens commitment to a vacancy levy will go a long way to help remedy high retail rents in Boundary St #WestEnd "…because it puts pressure on investors to drop their rents, and once they do that, that starts to activate those shops" @jonathan_sri told residents. #Gabbavotes

PROMISES FOR THE GABBA

Both candidates have made a number of commitments at the local level.

Ms Gallagher has committed to:

Cr Jonathan Sri, as outlined above, wants to see:

This is a very brief overview of the discussion on the day, so for more details see the video and links below.

Kurilpa Futures live streamed the Saturday Forum – see here for details. Best to start watching from around the six-minute mark when the camera work gets a bit steadier.

Posted by Kurilpa Futures – Planning for People on Friday, 6 March 2020

For a full list of their commitments see the candidate’s websites:

The Brisbane Times has also provided a useful summary of party promises for Brisbane, including the financial commitments – see HERE

Part Two of this story, covering the WECA forum held on Wed 11 March can be found HERE

[1] Nathaniel Jones did not attend the forum. See his website for details of his commitments.