Promises, promises… but the devil is in the detail…Part 2 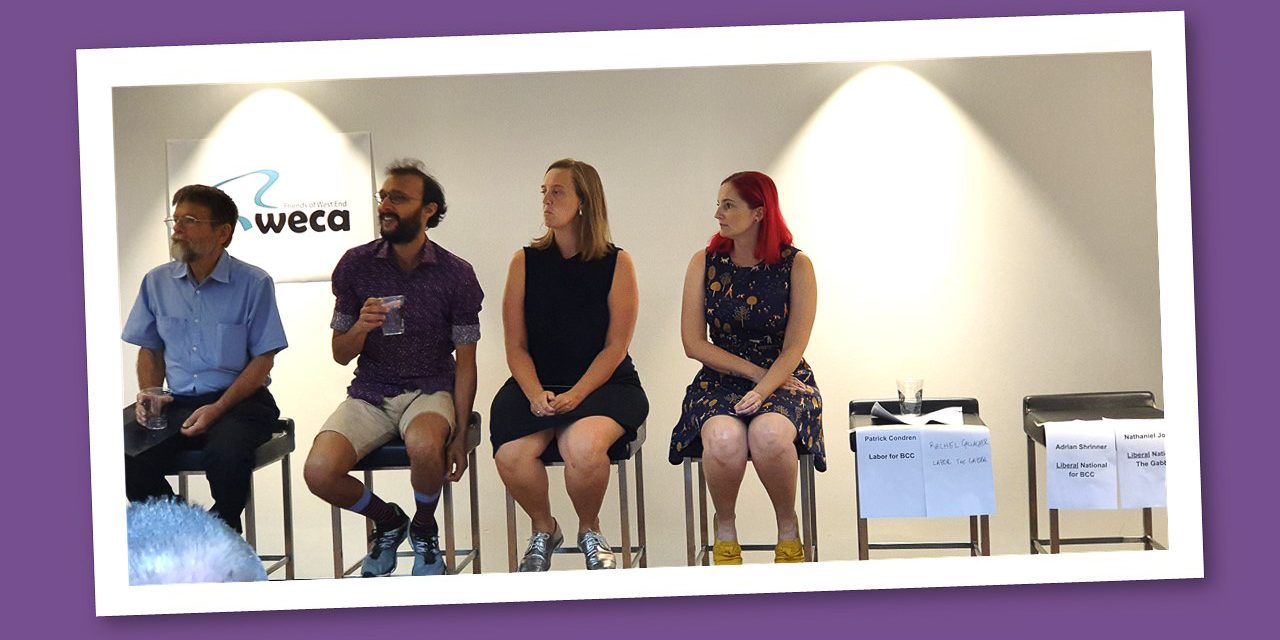 On Wednesday, 11 March, the West End Community Association (WECA) Politics in the Pub event was a very different event to the earlier candidates’ forum hosted by Kurilpa Futures. It was a more intimate affair and following brief candidate statements, all questions came from the floor, so candidates were less able to come prepared. Also, concerns from the floor appeared to be more local and less global.

Unfortunately, Labor’s Rachel Gallagher’s sent apologies due to a sick child, and as the LNP’s Nathaniel Jones did not attend either, Jonathan Sri was the only Gabba Ward candidate on the panel.

However, we did get to hear from independent Mayoral candidate Frank Jordan, from Kath Angus, the Greens candidate for Lord Mayor and from Karagh-Mae Kelly from the Animal Justice Party, also standing for Lord Mayor. These are candidates who do not often get a public platform.

Questions to the panel ran the gamut from concerns about the frequency of Glider Bus services, to affordable housing, local parking issues, mobility in the city for people with disabilities, climate change, affordable spaces for arts and entertainment, domestic violence and more.

It was interesting to observe that no candidates raised emergency planning and risk assessment given the current global pre-occupation with the covid-19 pandemic. Nor were there any related questions from the floor. This is surprising given the potential impacts on the most vulnerable among us, for example the homeless, older people and casual workers, and of course the impacts on local businesses. It is also surprising given that the Kurilpa Peninsula is so susceptible to climate extremes which, as we have seen in the past, require very specific localised responses.

While the audience was disappointed not to hear from Rachel Gallagher, my impression was that Jonathan Sri may have been disappointed too, because it did appear that he had turned up with the intention of making a clear distinction between himself and his main rival.

While Cr Sri admitted that the LNP, Labor and the Greens each have similar concerns, he said the difference between them is that The Greens have made, “very specific commitments not vague statements.” He said, for example, that The Greens have committed to increase the percentage of tree coverage required for new developments, to free off-peak public transport for everyone, and have identified new city glider routes and which intersections and roads need new pedestrian crossings. So, he said, whether you agree with Greens policies or not, ‘you know where we stand’.

Nevertheless, as with the earlier forum on Saturday, there seemed to be strong agreement between the candidates at the WECA event on most issues raised, and again, as Jonathan Sri observed, ‘the devil is in the detail’.

Independent Mayoral candidate, Frank Jordon, a self-described ‘doer, rather than a talker’, committed to creating jobs through supporting an electric car industry, cannabis farming for medical purposes, programs to save endangered species, and building the proposed Indigenous cultural centre in Musgrave Park.

The Green’s Mayoral candidate Kath Angus observed how disappointing it is that only two women of nine is standing for Mayor. She said that while “we all want similar things”, the Greens platform is transformative, not tokenistic. She ran through policies that include, a vacancy levy on empty buildings, increased infrastructure costs levied against developers, and increased funding to support those who are homeless. She said that while the major parties side with big business, Greens policies “put people before profits”.

Karagh-Mae Kelly, Mayoral candidate for Animal Justice said that she can bring her experience as a business owner to the role of Mayor. She said she is standing for election because she thinks Council can take animals, humans, and the environment into consideration across all policies. She said people she speaks with most often raise inaction on climate change as a key concern. She said she also wants to see better dog parks, bringing wild-life back into the city, re-foresting the environment, and a trial of dogs on buses and trains.

All panelists said they supported a declaration by Council of a climate emergency. Frank Jordon talked about the need to commit to practical measures such as electric vehicles. As Rachel Gallagher had done in the Saturday forum, Kath Angus criticised Brisbane City Council for purchasing carbon offsets to meet its emissions targets. Karagh-Mae Kelly added that we are experiencing not only a climate emergency, but an ecological emergency.

Homelessness was a theme for both of the Greens Candidates. Kath Angus, said her party wants to commit $40M to address homelessness, and is also committed to inclusionary zoning to ensure that developers will contribute to affordable housing in the city.

All candidates were on the same page when it comes to cars and buses on the proposed new green-bridges – no-one wants that. Jonathan Sri said active transport will take cars off roads and he said he supports a footbridge from Toowong to West End, with any loss of any green space needing to be off-set. Karagh-Mae Kelly was more cautious and said that before any bridges are built, there should be a proper assessment of what will be lost in terms of green-space and animal habitat.

.@WECA4101 Politics in Pub – Q. To @jonathan_sri about how West End can get bi-partisan support for a community centre.
#gabbavotes

Cr Sri The Greens policy for residents to have a binding vote on Neighbourhood Plans. #gabbavotes

This is a very brief overview of the discussion on the night, so for more details see the video and links below.

Here is the recording of our Meet the Candidates Forum.Thanks to Mayoral Candidates – Kath Angus(GP), Karagh Mae Kelly(AJP) & Frank Jordan (Ind) for bringing passion, care and sincerity to our city. Thanks to Cr Sri for doing another forum.Unfortunately Rachel Gallagher from Labor had to withdraw due to an ill child.Voters will be able to see her and Cr Sr at Wandering Cooks forum 18 March.

For a full list of their commitments see the candidate’s websites:

Brisbane Times has also provided a useful summary of party promises for Brisbane, including the financial commitments – see HERE

Part One of this story, covering the Kurilpa Futures forum held on Sat 7 March can be found HERE