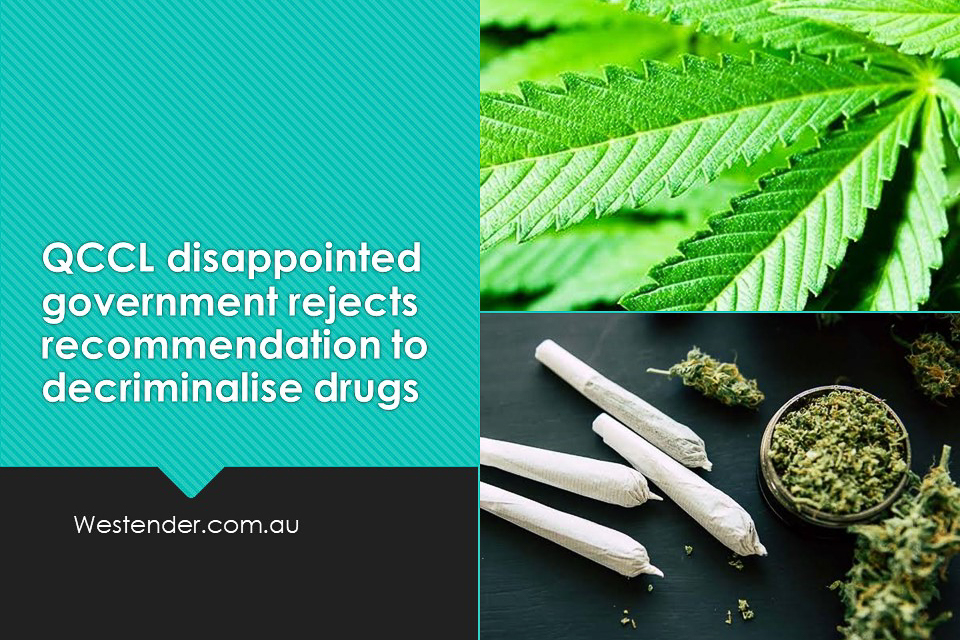 The Queensland Government has today rejected a proposal to decriminalise marijuana. This, on the same day that the Australian Capital Territory’s new drug laws came into effect. These laws make Canberra the first, and so far only, city in the Australia to legalise marijuana for personal use and cultivation.

The recommendation to decriminalise marijuana in Queensland was made in a report into imprisonment and recidivism by the Queensland Productivity Commission. It found that drug offences have contributed notably to the growth in imprisonment in the State.

The Commission estimated that reform that would legalise lower harm drugs (cannabis and MDMA) and decriminalise other drugs, is likely to provide net benefits to the Queensland community of at least $2.8 billion and reduce the prison population by around 1,050 people by 2025.

“The QCCL is disappointed that the government has rejected Queensland Productivity Commission’s recommendation to decriminalise drugs,”

“In its report released today, the Productivity Commission found that, all available evidence suggests that the policy of minimizing harms from illicit drugs by criminalisation has not been effective. One in every six Queensland has used an illicit drug and that usage has increased over the last decade. Despite this clear evidence, the Queensland government has chosen to carry on regardless with its failed policy.”

The QCCL says that the personal use and possession of all drugs (psychoactive substance) and psychotropic plants should be decriminalised, and that cannabis should be legalised.

“We know that drug decriminalization works because of the Portuguese experience,” Mr. Cope said.

“Overall, the evidence suggests that removing criminal penalties for personal drug possession did not cause an increase in levels of drug use,” the QCCL said today.

Portugal decriminalised the personal possession of all drugs. This means that, while it is no longer a criminal offence to possess drugs for personal use, it is still an administrative violation, punishable by penalties such as fines or community service. The specific penalty to be applied is decided by ‘Commissions for the Dissuasion of Drug Addiction’, which are regional panels made up of legal, health and social work professionals. The vast majority of those referred to the commissions by the police have their cases ‘suspended effectively meaning they receive no penalty. People who are dependent on drugs are encouraged to seek treatment but are rarely sanctioned if they choose not to the commissions’ aim is for people to enter treatment voluntarily; they do not attempt to force them to do so.