Reimagining Brisbane: Civic Participation for a City that Reflects People’s Wants and Needs 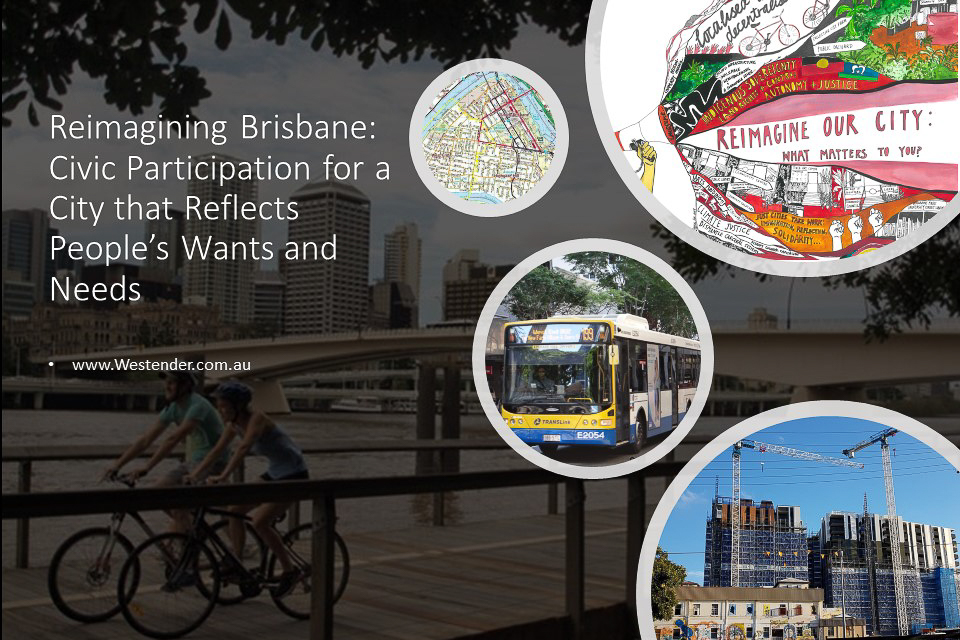 Often politics feels so far removed that we don’t engage. The establishment looks big and its weight seems unbearable; it makes us feel as if we have no stake or power. When these feelings of detachment and powerlessness creep in and settle with us, we become sceptical that our opinion matters. And so, we don’t even invest the time in formulating our opinions. We look away and hope for the best. We convince ourselves that things are as they should be. In fact, we relinquish the opportunity to mould our own environment according to our wants and needs.

Political detachment is a choice and it can be otherwise.

City Council Elections are coming soon – 28th of March 2020. This is an opportunity for people to reconnect. People can either decide to stay with the feeling of powerlessness and disengagement and go with the flow hoping for the best, or they can jump in the bandwagon of civic participation to explore what matters to them. Local politics dictates much of our surrounding and immediate life: how our neighbourhoods are shaped and developed; the ins and outs of public transport; local services such as libraries and cultural centres; care and support for the vulnerable and those in need. And so, local politics is the best place to engage and reclaim the power to express what matters to us. Even those who believe that they have no problems and that politics does not affect them directly surely have something to say about the streets that they walk and the businesses that they interact with daily.

At Reimagining Brisbane, a conference/consultation time organised by The Gabba Ward Councillor, Jonathan Sri and held on the 1st of February at QUT, people had the opportunity to discuss the issues that matter to us. Many academics, consultants, activists, and people from the general public invested their time to get together and share knowledge and concerns about the future of Brisbane.

Here are some of the issues and questions that were discussed:

Reimagining Brisbane created a safe space to discuss concerns and policy actions. Many people have never done that or thought that they could have done that. There are certainly many issues that matter to people that were not discussed at the conference, but it was a great model of civic participation.

Reimagining Brisbane was an example of direct democracy where residents are consulted in person (as opposed to online surveys which make people feel unheard), and where they can come together to workshop policy recommendations.