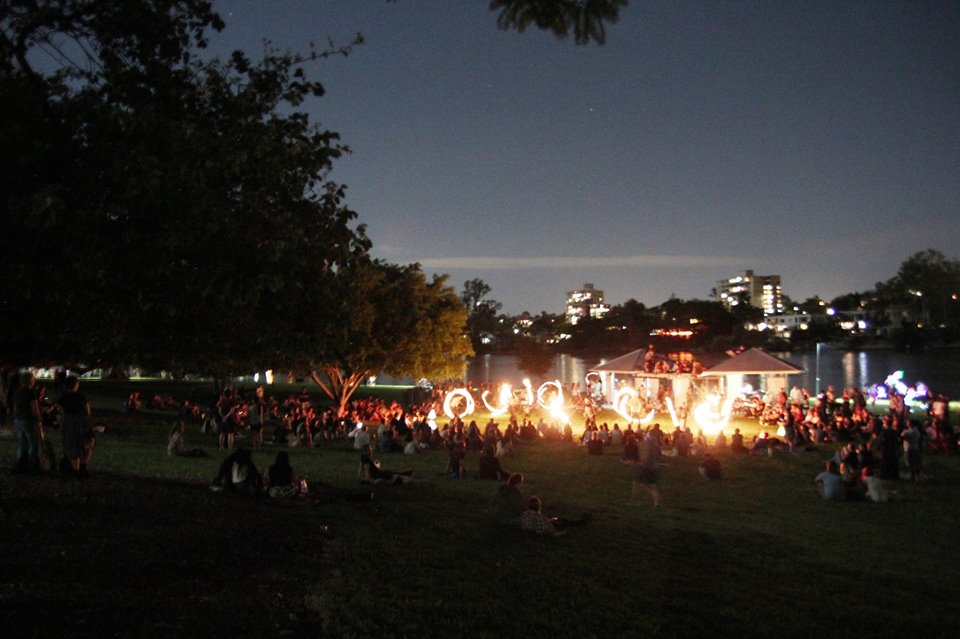 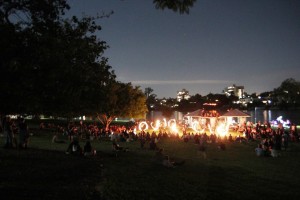 The battle lines between West End’s spontaneous grass roots and our “no art, no heart, no-fun, no way” establishment were clearly drawn at the West End Fire Festival at Orleigh Park last night. Two Rapid Response Group vehicles with at least eight officers descended on the area, writing out $89 parking tickets for those tourists parked higgledy piggledy under trees and on nature strips in an effort to enjoy the packed event.

Hundreds of locals and visitors have come thirteen times a year since 2006 to the south west corner of 4101 to enjoy the fire-twirling and drum circle under the full-moon. This month’s combination of clear skies, warm air and the panicked closure of the Boundary Street Markets resulted in a larger than usual crowd, a lively atmosphere and an upwelling of community spirit that makes an old Westender gratified to live here. 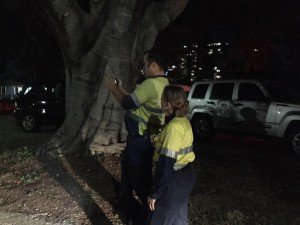 The heavy handed response from the Brisbane City Council left a sour taste in the mouth of many visitors. A BCC officer told Westender that there had been a complaint from “at least one resident”. The tip-off resulted in two teams of rapid response staff photographing number plates as fast as they could to write out the tickets later.

The BCC officer told Westender that the rights of hundreds of visitors to enjoy a community event did not outweigh the rights of one resident, “if they are doing something illegal.”

“This is clearly illegal parking and we are simply upholding the law,” she said.

As word spread, victims of the sting moved their cars, some arguing with the RRG officers. One woman suggested that a Rapid Revenue Grab was more on the minds of the RRG manager than Dedication to a Better Brisbane, the slogan printed in large letters on the RRG van, also illegally parked. 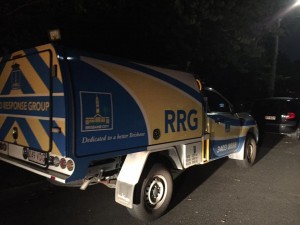 RRG is dedicated to a better Brisbane, as long as no-one is having fun or doing anything creative

Councillor Sri told Westender he would’ve preferred to see first-time offenders who genuinely didn’t know the parking rules receive a warning rather than cop a parking fine, but that the broader problem with parking on the peninsula was largely due to the high cost of public transport.

“A lot of people would happily catch the bus or CityCat if we made it cheaper.

“I love the fire-twirling down at Orleigh Park, and I think the majority of residents don’t mind it as long as visitors take their rubbish with them and don’t park in front of driveways.

“I would be really disappointed if a handful of complaints from a small but vocal minority were to undermine this important local cultural tradition.”

Regular Westender readers will recognise this knee-jerk ‘shut it down’ response by BCC staff to spontaneous and creative community activity from the furore over street art in 2014. See Westender’s comprehensive coverage of the Street Art debate.