The Southside recognises our unsung volunteers 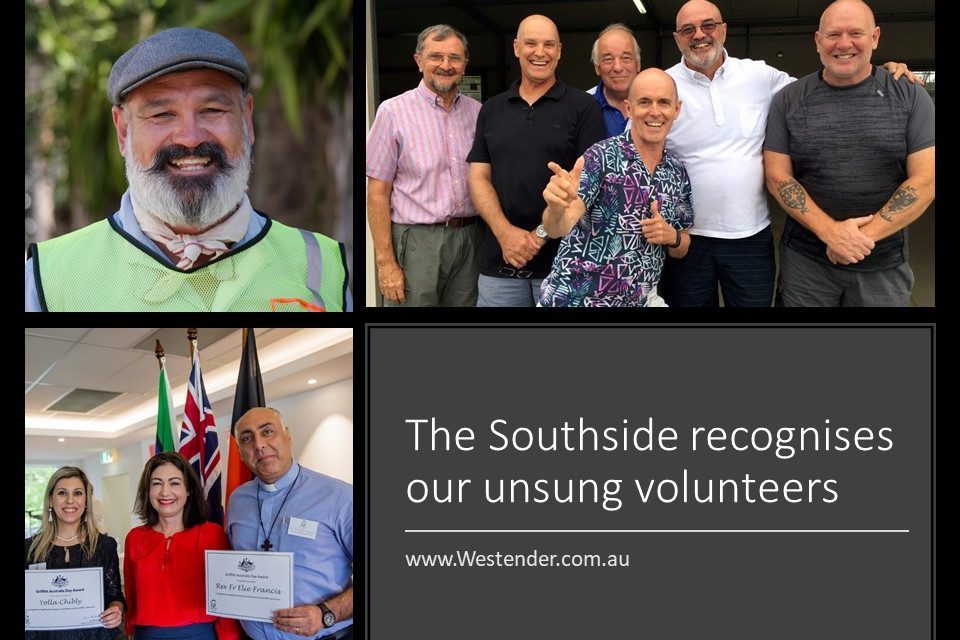 On Australia Day this year, a number of locals were recognised for their outstanding work in the community.

The 21st Griffith Australia Day Awards recipients have been commended by Member for Griffith Terri Butler for their extraordinary contributions through their voluntary work with the Southside community.

“These are the unsung heroes of the Southside who work hard for our community every day,” Ms Butler said.

“They ask for no recognition, and they work incredibly hard to make our community a better place.”

South Brisbane Men’s Shed (SBMS) in Woolloongabba offers are range of interests and activities for men from computing to gardening and building cubby-houses for charity. It aims to promote and encourage friendship and community involvement for men’s wellbeing and good health.

Secretary of the SBMS, Iain Salkield, told The Westender that those who were nominated for the Griffith Australia Day Awards were among the original members who set up the organisation in April 2017: David Spillane, the founding President, along with Norbert Gaulton, Secretary and Neil Roberton, Treasurer.

Mr Salkield said these men have continued to be involved with their original sheds and with other community activities, “…including being head coach of an out-rigger canoe racing club and treasurer of a choral group, and in one case still being in full-time work as an academic vet. So, busy …!”.

“It would be inappropriate not to mention the great support we have had from the Autism Hub and Reading Centre and the originator of the idea for the shed, Chris Lassig, who was then the Hub’s Executive Director,” he added.

Mr Salkield said the founders of SBMS had an interest in music and the Shed now has a well-supported ukulele group. He said the group is still converting one of its buildings into a wood workshop and has completely restored a termite-ridden ex-toilet block with the intention that it become a smithy (“when we can safely use open fires!”). The shed also has an active leatherwork group and members have been engaged in making three string guitars.

The SBMS is the first Men’s Shed in Australia to have a special interest group for fathers of young people with autism. It provides a safe place for fathers of children with autism to come and talk with other fathers and grandfathers with similar experiences.
West End local, Darren Godwell was recognised in the Griffith Awards for his voluntary work with the Aboriginal and Torres Strait Islander Legal Service and with West End Community Association (WECA).  He told The Westender that he is honoured to have his community service recognised.

“I am humbled by the recognition, but I am just one person; dozens and dozens of people have contributed,” he said, “Community organisations are wonderful because so many people are making contributions which make our communities vibrant and thriving places to live.”

Darren was president of WECA from 2008 to 2013. Congratulating Darren on its Facebook site, WECA posted, “During his Presidency he fostered a culture of positive campaigns, increased media coverage, industry dialogue and broadened our advocacy to include stunts and court appeals”.

When he is not volunteering, Darren is the CEO of i2i global, a 100% Indigenous owned consulting and project delivery company that operates in Latin America, Asia, Pacific and Australia. The company supports the development of civil society, and provides consultancy and contractual services to assist Indigenous organisations enter into contracts for overseas aid.
The Griffith Australia Day Awards recognise volunteers who perform extraordinary or outstanding voluntary work in the Griffith electorate.
Categories for selection are:

Nominees were put forward by locals from their communities and were selected by a committee of community leaders.

The Westender congratulates all other Griffith Australia Day Awards recipients and hopes to provide more profiles of winners throughout the year.  With Darren Godwell and the SBMS other winners are:

The recipients will be honoured with a special ceremony, to be held by Ms Butler on Saturday, 9 May 2020.

Darren Godwell (top left), Yolla Chibly and Rev. Elie Frances receiving awards from Terri Buler MP in 2018 (bottom left), Neil Robertson on the left in the pink shirt, Norbert Gaulton next to him in a dark blue shirt, and David Spillane in white, with other members of SBMS (top right).