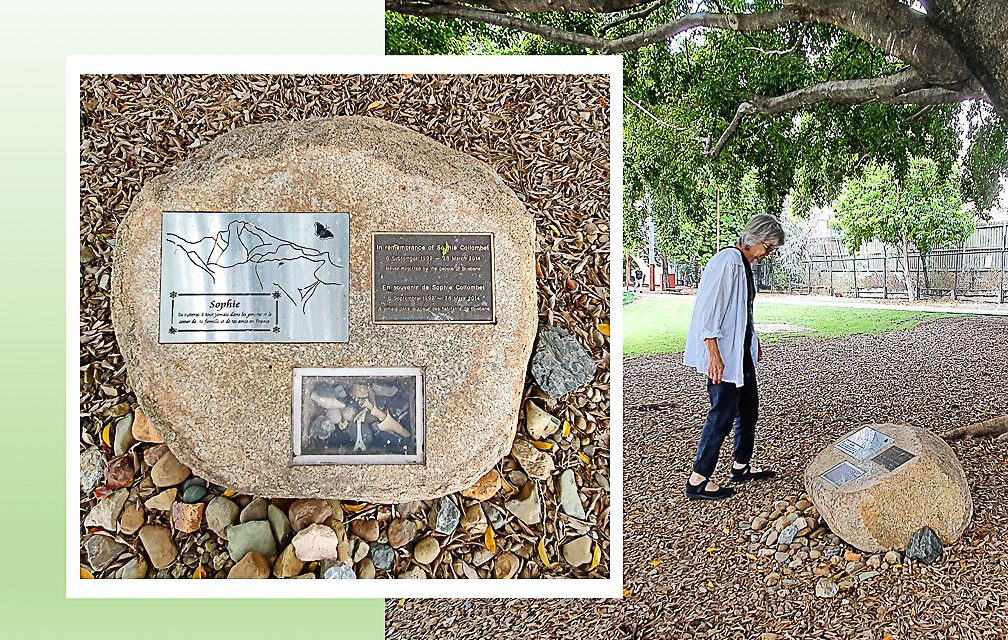 Walking, cycling, scooting, running on the riverside track you will probably miss the boulder beside the path. Or think yet again that you’ll stop next time and check it out. Some of us visit it regularly in the dense shade of the big fig at Kurilpa Point Park where it sits between the milk factory and the brown snake of the Brisbane River.

Sophie Collombet a 21year old visiting French student, on 27th March 2014, walked the same path you were on but unlike you she never reached the Go Between Bridge. She didn’t get to cross the bridge and be back safely at her flat after a late night of lectures at Griffith.

Instead she died on 28th of March in the gazebo (it cannot be named a ‘shelter’) near the boulder, her memorial stone. Sophie’s life ended when she was left to die alone after a vicious attack by a stranger. A candlelight vigil was held for Sophie and deep grief felt at the time will linger. Her devastated family and partner came to Australia for the trial of Sophie’s killer.

In France her family, partner and villagers mourn. Here, those who know this rock pause, and from time to time brush away the fig tree’s crumbs and leave a small river stone or a token. Last year photos and a message were sent to Guillaume Collombet, one of Sophie’s two brothers. He explained in a reply that the mountains shown on the boulder’s plaque are viewed from their home in France. Guillaume added that a butterfly was also engraved because several days after Sophie’s death he watched it nearby and asked for comfort. The butterfly came to rest several minutes on his hand.

“I often think of this magnificent country” he wrote, “and we had a very warm welcome from the Australians.”

I would like to see a seat near Sophie’s memorial stone: preferably one beside the upper pathway and in the sunshine. Perhaps if you agree, or have another suggestion, you could contact the Lord Mayor as I will be doing. And remember to tell young people to walk in the world with joy but also with caution … and where you see public places that could and should be made safer, tell your elected representatives: see that it’s done!

Next time you are on that path take time to visit Sophie’s stone; introduce someone else to Sophie. You’ll probably feel too that there is something you want to say while you are visiting.

More than 2,000 people gather in Brisbane for a march and candlelight vigil for Sophie #Collombet http://t.co/9Jd5b0Boeq

Background from ABC’s Lateline in 2014

Maeve Cunnington is happily retired, but not from life, and living at Tangara Retirement Village. Many years of walking and cycling and picking up discarded plastic on the Kurilpa peninsula. And reporting to BCC via the fixit line where things need doing. Bring on the end to all plastic straws and plastic coffee cup lids, I say, not to mention the carelessly discarded cableties on construction sites. A member of Kurilpa Futures group - ‘City Planning Not City Cramming’ - follow them online!