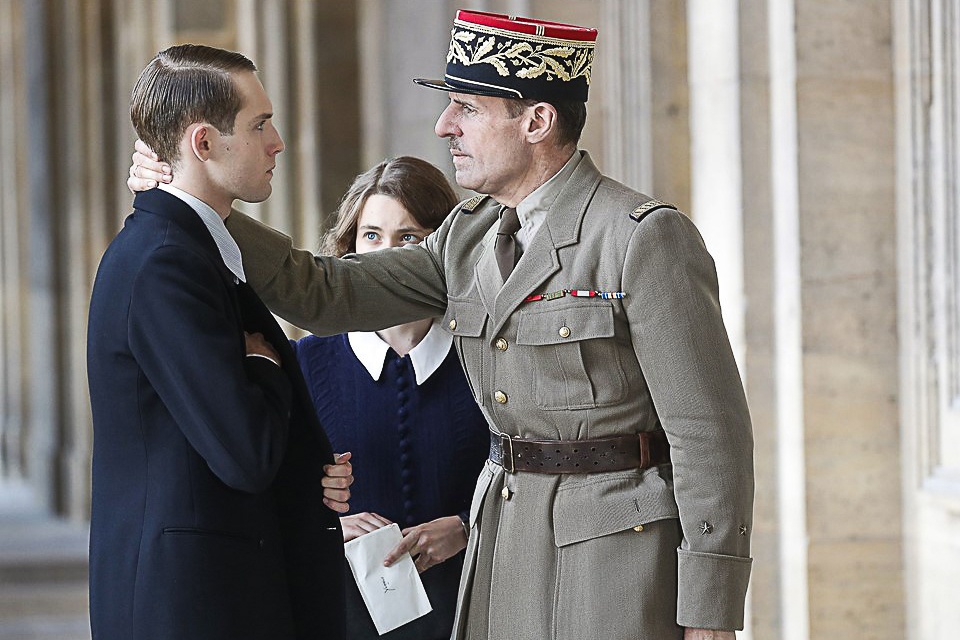 Just prior to going in to see The Man Who Sold His Skin at the 2021 Alliance Française French Film Festival, a large group suddenly flowed out of the adjoining cinema at Palace, James Street; a full house it seemed, something not seen there for a while. ‘What did you see?’, we asked one of the passing patrons. ‘Oh, it was Antoinette in the Cévennes’, she said. ‘How was it?’ ‘Good, very entertaining’, was her reply. That movie, an acclaimed comedy, is now on my list.

The 2020 festival had just begun when, this time last year, we went into lockdown. Like previous FFFs, the current showings are a mixed lot but we seem more than ready to take on this program of 38 films. French cinemas are still currently closed so we are seeing several of these before their French release. There are more than a dozen dramas, a similar number of comedies, surprisingly fewer love stories, although the iconic (and newly restored) Breathless is reprised. Three biopics are on offer with one of them, De Gaulle, being my brief focus here. The other two are Eiffel, the opening night presentation (yes, Gustave Eiffel and his tower), and Aline, a fictionalised biography based on Céline Dion.

The stirring action in Gabriel Le Bomin’s De Gaulle takes place over just a few short weeks beginning in May 1940. We know this because the dates come up regularly on screen marking each successive day and chapter. They are tremulous days as the German army relentlessly approaches and crosses France, the French army collapses and the Nazis proceed to take over Paris. Refusing to accept his government’s armistice with the enemy, the newly promoted General De Gaulle (Lambert Wilson) — wanting to change the course of history — flees to London to gain the support of Winston Churchill (Tim Hudson) and his government. ‘Perhaps our two counties could become one?’, a French delegate suggests; ‘Non, Monsieur’, came the swift response.

Throughout, the general’s story is skillfully interwoven with the dual story of his family life, particularly that of his wife Yvonne (Isabelle Carré) with emphasis on the love they share for their young handicapped daughter Anne (Clémence Hitten). With De Gaulle in the UK his wife and children desperately seek to escape France, and somehow eventually do so on the last and overcrowded ship out of Brest. Two of the more dramatic scenes come towards the film’s conclusion — De Gaulle’s bold 18 June broadcast via the BBC exhorting the French to resist occupation and continue the fight, followed shortly after by the family’s joyful reconciliation in London. In the end the film is not quite up to the momentous story.

A fine small-screen production it may have been, but then we’d have had a six episode series at least. We did want a little more and, had it been a series, it would have continued on beyond 1940 including, back in France: De Gaulle’s chairing of the Provisional Government of the French Republic (1944-1946), and on to 1958 when he came out of retirement, rewrote the French constitution and was elected President of the Fifth Republic later that year — a position to which he was reelected in 1965 and held until his resignation in 1969. By any account his life and career were extraordinary. And the series would surely have involved a handsome, mature French actor playing the shy André Malraux, France’s first Minister of Cultural Affairs during the De Gaulle presidency. Malraux was also a novelist, poet, art theorist and, during the war, a member the French Resistance. In the new post-war government, he saw as his mission to preserve France’s heritage and to develop culture for the people as well as to bring the arts world back to France and its capital. Regarding the latter, and having Malreax’s ear and the ministry’s support, it was Félix and Simone Brunau who were enabled to inaugurate the ‘Cité international des arts’ studios and work spaces in Paris for artists from around the world including many over the years from Australia (and Queensland).

By the way, The Man Who Sold His Skin (about a Syrian refugee who gets well-paid to be inked and exhibited in a Brussels museum), is my favorite FFF movie from the half dozen I’ve seen so far. It’s inspired by a 2008 project by Belgian artist Wim Delvoye who designed an elaborate tattoo on the back of Tim Steiner from Zurich; the work being subsequently sold to a German art collector. When Steiner dies his skin will be framed — until then he spends his life sitting in galleries with his shirt off. Currently Tim can be seen at Hobart’s MONA via a live video link.