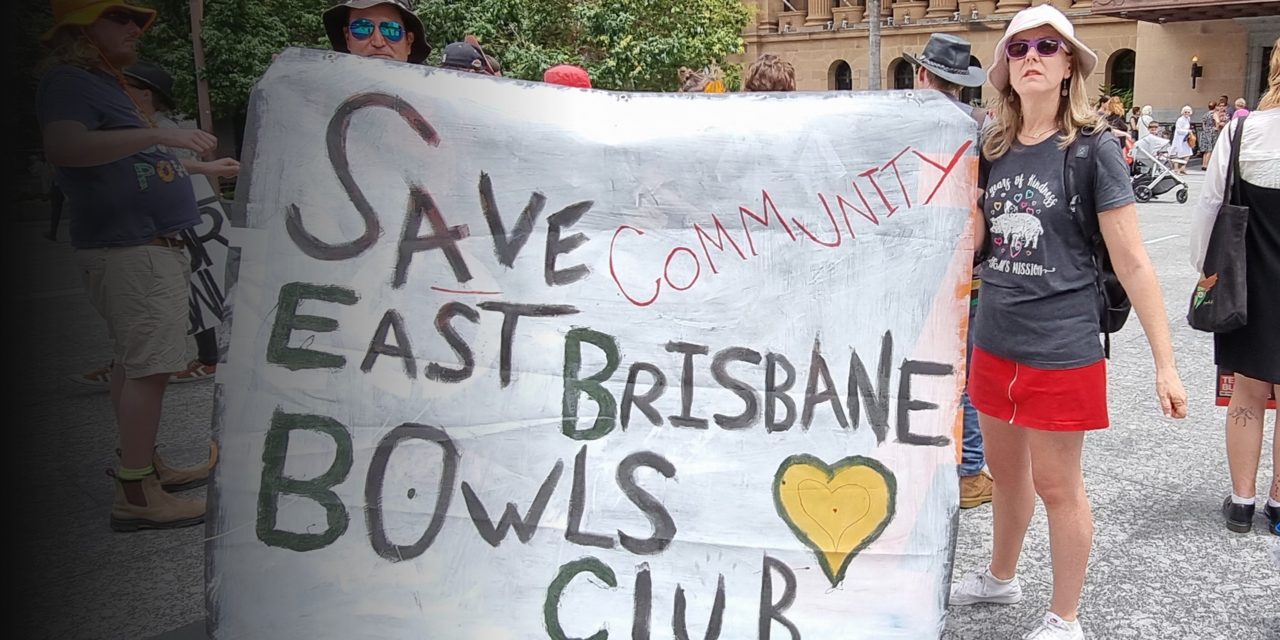 Concerned residents rallied at City Hall today, on Brisbane City Council’s final sitting day for the year. The group was protesting the Council’s proposed demolition of the much-loved East Brisbane Bowls Club, an arts hub known affectionately as the ‘Bowlo’.

Supporters of the Bowlo say it has been a cultural centerpiece for their community since 1905, hosting concerts, dances, celebrations and public events. They say the Club has been home to local creatives, most recently for Backbone Youth Arts.

“There are no venues available which parallel what we have at the Bowlo. The old East Brisbane Bowls Club is where we can have the greatest impact, this is the venue where we can achieve our greatest potential,” Backbone has said.

Supporters say that Council maintains that the grassroots community movement to save the Bowlo is a “fake campaign” run by party political operatives.

The Save the Bowlo group obtained information on the Council’s consultation process through a Right to Information application. This, they said, indicated that most residents want to see the Bowlo upgraded, and its use extended.

“In fact, draft council plans prepared just after conclusion of the initial public consultation showed an upgraded facility on the site of the Bowlo. In June 2021, however, when the BCC released its Mowbray Park Vision, the BCC’s proposal was that the Bowlo be demolished for green space,” the group said in a statement today.

Members of the Save the Bowlo movement have requested that LNP Council members meet with them to hear their concerns, but so far, have refused.

“We are real residents and users of the venue with genuine concerns.”

Robyn, one of the volunteers at the Club, said today that “it’s a space that is used regularly and lovingly by the community.”

Spokesperson for the protestors, Michelle (Dotty) Phillips, said the group is talking to architects, planners and urban arts projects about presenting an alternative vision to Council for an arts destination in Mowbray Park.

“We already have people coming from interstate and overseas in the last few years to perform there.”

“We call it the Powerhouse of the South.”

Local elected representatives came out in support of the community effort today.

Member for South Brisbane, Amy MacMahon, said there is no reason why Council should not keep the Bowlo.

“Its what the community wants.”

Ms MacMahon said that whether or not Backbone is happy with the new arrangements does not negate the need to retain community venues.

“We need these spaces for our community. We can’t afford to lose these venues because once we do, we will never get them back.”

Gabba Ward Councillor Jonathan Sri said that even if the Council appears to have dug in, it’s important for the community to resist moves to demolish community spaces.

“Every attack on a public facility needs to be resisted. And so even if it’s the case that the Council is already pretty set in its decision on this one, putting up a strong fight reduces the chance that Council will knock down other facilities in the future.”

Cr Sri said he takes heart from Council cancelling other projects such as the controversial Mount Coot-tha zip line, even when planning was quite advanced.

“So if Council can back out of a zip line project, which required them to compensate a private contractor a million dollars, they can easily back out of demolishing a bowls club that the community wants them to keep and that they haven’t yet firmly committed to knocking down.”

Labor Councillor Kara Cook said all Opposition Councillors have been fighting to save the Bowlo.

“We’ve done numerous urgency motions calling on the Council to save the site – calling on them not to ignore the fact that Backbone wants to stay.

“We’re going to keep fighting. We are not giving up.”

Community not bending to Council plans to relocate Backbone