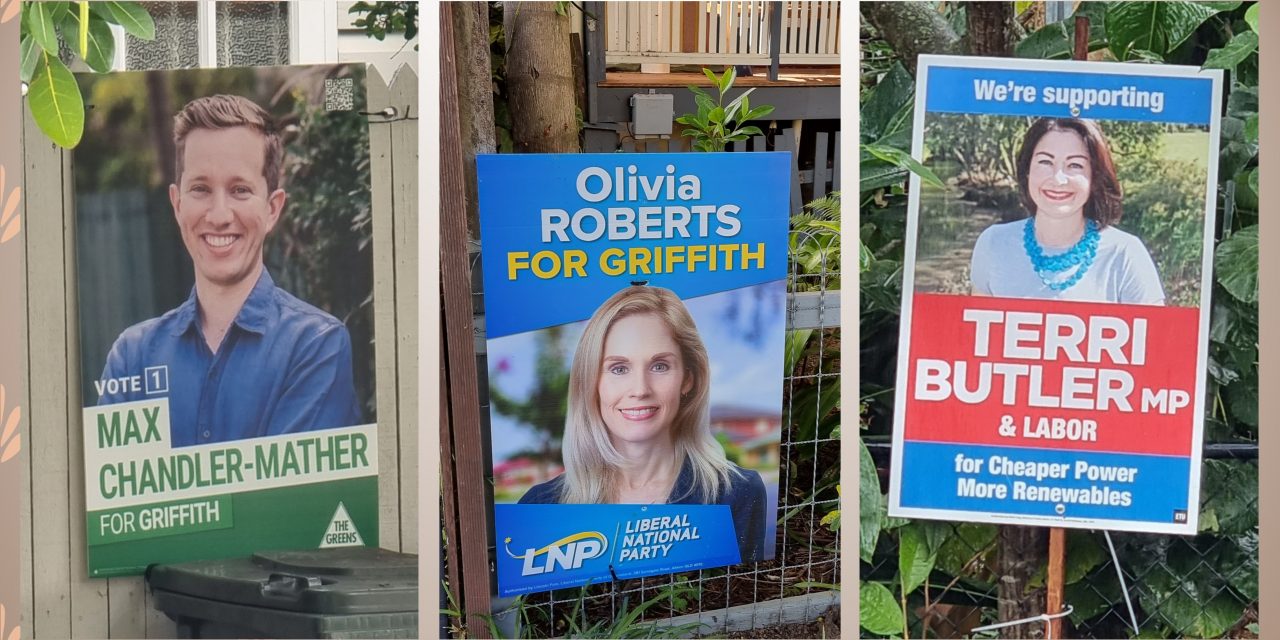 Election Day is fast approaching, and the campaigns have hit their strides. With voters eager to show their party affiliation, campaign signs and corflutes have sprung up across the Griffith electorate. However, some candidates and supporters have met with difficulty.

Last year, Brisbane City Council reintroduced limits on the number of electoral signs each party may display, reversing the 2015 removal of these guidelines. Candidates in federal elections are only permitted to display 150 signs per electorate, with requirements for registration with the council and time limits. The BCC provided this response to questions about the policy,

“Brisbane City Council’s advertising law applies to every candidate equally and the requirements will be enforced during the Federal election.

“The law strikes an appropriate balance between allowing freedom of expression while preventing a political signage free-for-all that residents strongly oppose.”

This “signage free-for-all” provided the basis for Lord Mayor Adrian Schrinner’s reasoning around the policy. Speaking to the Brisbane City Council at the time of the policy change, Mr Schrinner pointed to visual pollution and unnecessary waste as driving factors behind the limit.

Notably, single issue signs such as the Queensland Conservation Council’s climate corflutes are excepted from this limit. These signs produce just as much visual pollution and waste, so this exception raises questions about the true objective of the law.

Objections have been raised over the change in policy. The Greens consider Griffith to be their most winnable seat nationwide, and candidate Max Chandler-Mather, speaking to the Westender, claims the policy has outsized impact on the grassroots nature of minor candidate campaigns.

“The LNP and Brisbane City Council are trying to force us to take down hundreds of yard signs in Griffith based on a dodgy reading of a dodgy law, to make an extraordinarily undemocratic intervention in the federal election,” Chandler-Mather said.

“This has nothing to do with visual pollution and waste, it’s a political attack from our opponents. Council says it cannot afford footpaths or parks but can waste time and resources driving around the electorate hassling people for expressing their support for a political candidate.”

The Greens campaign has been hit with roadblocks when it comes to political signage, ranging from official communications to visits to homes by council officials. A council officer was sent to Chandler-Mather’s home to order his sign taken down. In comments to the Guardian Australia on April 22, Chandler-Mather has stated that the campaign “won’t’ be taking a single yard sign down.”

“If they start issuing fines, that’s absolutely something we’ve already sought legal advice on and we’d pursue it as far as we possibly can. And if that means going to court, then so be it.”

In comments to the ABC in 2021, University of Queensland electoral law professor Graeme Orr suggested the limit on signage would have to be explained to the Supreme Court in the case of a challenge, and raised questions about the enforceability of such a policy.

“It seems to rely on parties and candidates doing the right thing and self-limiting,” Dr Orr said.

“Because without a Google Map photo at the time, how can you prove someone has more than the number of signs to prosecute?”

Chandler-Mather believes the limit is poor policy and constitutes an “extraordinary intervention into a federal election campaign by an LNP led council.” He suggests that the policy is contrary to democratic ideals and the concept of free speech.

“Limiting a candidate to 150 yard signs per federal electorate (about 119,000 people) effectively prohibits over 99% of people from expressing their political beliefs. That is self-evidently a severe restriction of free speech.”

This corflute conflict in the seat of Griffith comes as political campaigns across states and party lines are experiencing problems with political signage. Australian Electoral Commission investigations are currently underway into fake election signs falsely suggesting climate-focused ‘teal’ independents are part of the Greens, and electorates country-wide have seen a wave of corflute theft.

Westender asked the Labor Party’s Terri Butler, the LNP’s Olivia Roberts, and United Australia Party’s Robert McMullan, for comment on their responses to Council limits but they declined.

Chandler-Mather’s signs significantly outnumber those of his rivals in West End, but it is now hard to determine whether that is because he has the larger supporter base, or whether it is because his party has elected to defy the Council by-laws. Certainly the Greens party see the number of signs as evidence of popularity.