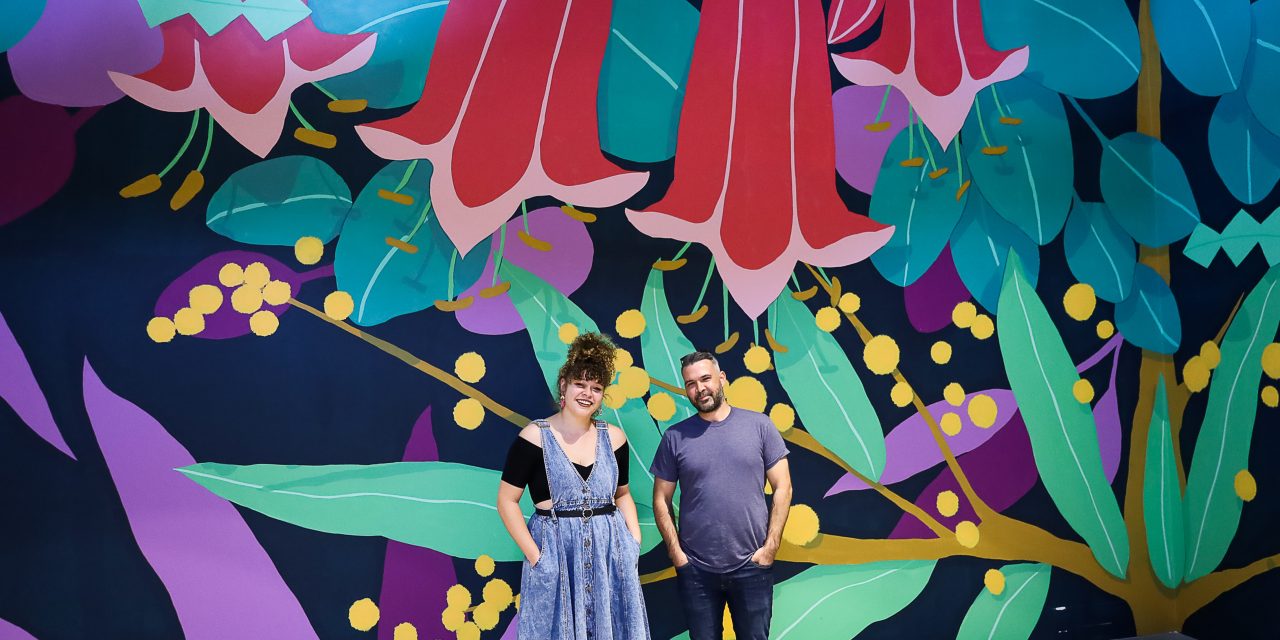 Last week, West End’s reborn Soda Factory development unveiled a stunning mural in the refurbished shopping centre. The mural was created by two local Aboriginal artists, with the idea of connecting the area’s significance for Aboriginal people with the more recent history of the site.

The mural was created and installed by Tori-Jay Mordey, an established Torres Strait Islander illustrator and artist based in Brisbane, and Warraba Weatherall, an installation and street artist from the Kamilaroi Nation of South-West Queensland.

The Soda Factory is nearing completion of a multi-million-dollar refurbishment paying homage to the building’s original use as a soda making and bottling facility for iconic Queensland soft drink brand Tristram’s.

The artists made connections with the Aboriginal history of the area, including native plants which were used as food, medicine and additives to sweeten drinks.

These elements are part of this colourful mural which helps describe the history and characteristics of the area.

“In an artistic way we’re making sure there’s still a presence of that knowledge and acknowledgement of place, even though it’s a developed building now,” Warrabaa Weatherall said.

“I think that the art on the walls is a beautiful gesture, and an opportunity to tell some of our stories. Sometimes architecture can be intimidating and if there are ways to activate spaces and tell the stories embedded in these types of murals, then you’re more likely to get community coming into these spaces and embracing them. And also, we really love it when we have our community take ownership and relate to these stories and these images and tell their own stories that they connect with,” Amanda Hayman, a Co-Director at Blaklash Creative said at the unveiling last week.

“Drawing from this narrative the artists made connections with the history of the area through native plant species which were used as food and medicine.

“This narrative is intertwined with the more recent history connected to the Tristram’s Soda Factory including the use of the bottlebrush flower which was used as a sweetener for flavouring drinks.

“These elements have been beautifully included in this colourful mural which helps describe the history and characteristics of the area.”

A refurbished Coles centre is open for business, and on completion, The Soda Factory will include 22 speciality stores and 220 car park spaces. New travelators provide convenient access are now also operating.

Designed by prominent Brisbane architectural firm Atkinson, Powell and Conrad, and built by well-known builder Walter Taylor the unusual Spanish Mission styled factory building was constructed in 1930 for soft drink manufacturer Tristram’s. The building remained in use by Tristrams until 1979 before it was sold and converted into markets.

The official opening of The Soda Factory will be in November 2021.