My love affair with the ABC 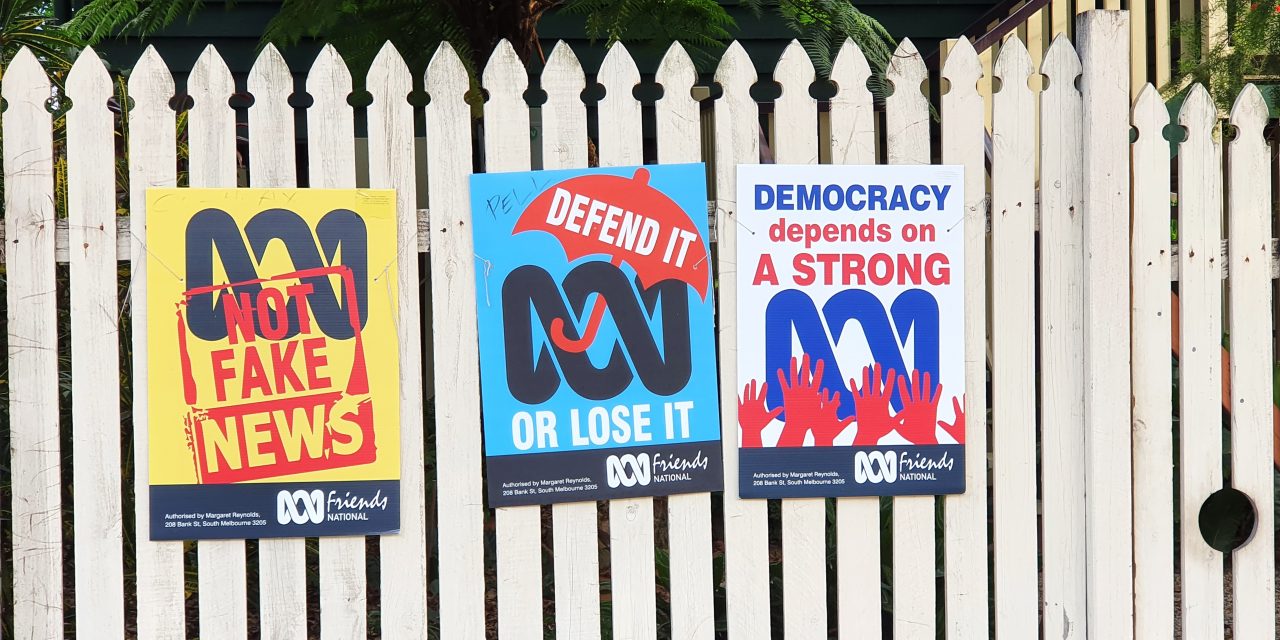 I have lived in West End for nearly 18 years, but I am a newbie compared to my Greek neighbours. When I first moved here, I noticed the elderly gentleman across the road sitting on his front step, watching the passing parade. Years later, I’ve also taken up the habit, partly in response to COVID lockdowns, and partly because West End is a place where you can chat to people on the street.  And, inevitably, the conversations turn to the signs on my fence. There are three and they’ve been there a while; their messages are simple and important to me.

They’ve been produced by ABC Friends as part of their ongoing campaign to defend and promote the role of Australia’s independent national public broadcaster, the Australian Broadcasting Corporation (ABC). I head up ABC Friends in Queensland.

I remember first becoming a member of ABC Friends in my undergraduate days at UQ (the organisation was formed in 1976). Back then, as now, the values of equity, participation and social justice were important to me. And it seemed to me that an independent public broadcaster allowed us all to become informed and participate in decision making that affects all of us.

We are so lucky to have a public broadcaster that is not state controlled. Not every country can boast that.  From the ABC, I can obtain information that has been fact-checked, and that I know is not emanating from conspiracy theorists or other invested bodies. The ABC also ensures transparency and accountability of government to its citizens in the name of democracy. I have learned so much from the ABC over my lifetime, and so have my kids.

Playschool and Bananas in Pyjamas were regular viewing, now joined by the lovely international and national award-winning Bluey, made not far from here in the Valley. And I can’t quite believe the amount of teaching resources now available from ABC TV Education.

As you’ve no doubt seen recently, Four Corners has been undertaking quality investigative journalism for an amazing SIXTY YEARS! It has led to many royal commissions which have tried to address underlying injustices, for example Black Deaths in Custody (1985), The Moonlight State 1987 (leading to the Fitzgerald enquiry which I lived through), Children Overboard (2002), Banks Behaving Badly (2016) and most recently Who Cares 2018 (leading to the Aged Care Royal Commission).

These are just some of the reasons why I think the ABC is a very precious asset for Australians. But the reason I joined ABC Friends was because of the ongoing and escalating attacks against it. They emanate from governments which are being brought to account for questionable behaviour, from conservative right-wing, or free-market bodies like the IPA (Institute for Public Administration) which believe the ABC is biased and should not be publicly funded, and from commercial competitors such as the Murdoch press. One political party even wants to privatise all or part of the ABC (e.g. Triple J).

So, over the years, the ABC has suffered a death of a thousand cuts. It has slowly been starved of funds (losing $783m 2015-2022) and has had to retrench up to 250 staff in 2020.  In doing so, it has lost a great deal of the wisdom and corporate memory of experienced journalists, producers and camera crew. ABC Alumni was formed in 2018 by these journalists, many of whom are household names in Australia, and who now work with ABC Friends to defend the public broadcaster.

ABC Friends has branches in every state and in Victoria and NSW, where it began 54 years ago, there are many sub-branches with thousands of members. Our Queensland branch with a membership of around 600 including one sub-branch on the Sunshine Coast, is one of the smaller groups. Much of our activity focuses on awareness raising regarding the amazing public service that the ABC provides and at the same time the ongoing threats to its existence. We also prepare submissions to government.

If you would like to get involved, you can contact me on president_qld@abcfriends.net.au or you can join up at HERE.