Students petition to save studios at Queensland College of Art 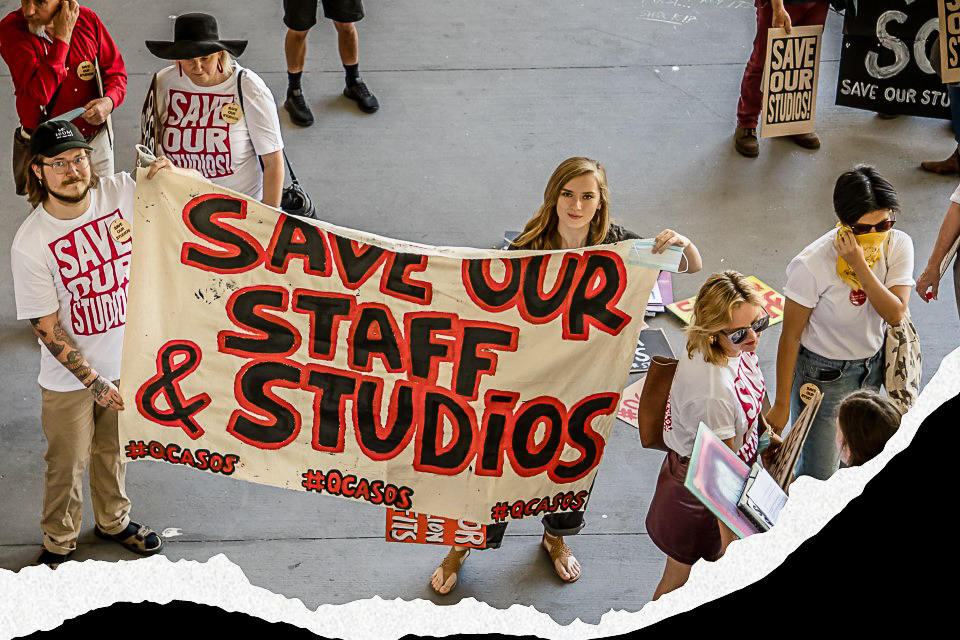 In its own publicity, the Queensland College of Art (QCA) at Griffith University, claims to be one of Australia’s top-ranking and largest dedicated art and design schools.

“QCA has been challenging the boundaries of art and design education since its foundation in 1881,” the University says in its online blurb.

That reputation is now under threat according to a group of students and alumni, who were blindsided by proposed changes to QCA’s operations in a newly released review by the University, Proposal-for-Workplace-Change-Roadmap-to-Sustainability_students(2). The review forecasts cuts to courses and associated studio areas at QCA as part of the University’s response to the impacts of COVID-19 on its revenue in coming years.

Students argue that the proposed cuts are not evenly spread across the University, and disproportionately target the QCA and the arts.

The flow-on effects, they say, could see QCA losing 44% of its teaching staff from Fine Art and Photography, and 16.7% from Design.

“This is in addition to the many sessional and technical staff whose contributions are invaluable to studio-based art education,” PhD Student, Matthew Newkirk says.

Staff, facilities, and graduates of QCA are internationally recognised for their academic and studio excellence.

“Studios lie at the heart of education in the visual arts. They are indispensable because they offer the space to work together. When groups of people are collectively focused on the re-fashioning of materials to produce images and forms, the value of the education they receive is multiplied exponentially,” Emeritus Professor Pat Hoffie AM said.

The Jewellery and Small Objects program has also produced globally recognised practitioners. Among them, Bianca Mavrick, who is passionate about studio-based learning.

“The J&SO program is the only university course of its kind in Queensland, and one of only four nationally,” Ms Mavrick said.

Adam Ferguson, whose photograph from Afghanistan made the cover of the New York Times; Krystle Wright, a National Geographic photographer; and Australian war photographers Michael Coyne and Jack Picone are some of the successful photography graduates from QCA.

Steve Mardon, who is on the Board of West End’s House Conspiracy, completed his Bachelor of Photography at QCA in 2019 and said that studio-based, hands-on work, is critical to visual arts practice.

“You’re learning and engaging and exploring a lot more when you’re collaborating with others and going on the same journey with them.”

Mr Mardon said that QCA is vital for nurturing arts in Brisbane. House Conspiracy has benefited from providing space for new graduates and students, supporting them to gain confidence in their professional work practice.

The QCA Students, Alumni & Community Support Group has already achieved its aim of 10,000 signatories to its “Save Our Staff and Studios” petition.

Kathleen O’Hagan, one of the organisers, said the group has been overwhelmed by support from graduates and the broader arts community.

The organising group is now hoping to meet with the University’s Vice Chancellor, Professor Carolyn Evans, to explore with her their ideas for sustainable approaches to the operations of the QCA.

“There are lots of things that we could do, whether that would be to run short courses or to open alumni membership to our studios.”

“Let’s have a conversation. And rather than just saying, ”okay, let’s cut everything”, really think about sustainable ways and processes to showcase the diverse and interdisciplinary nature of the QCA, and still provide the same results to other students across Griffith, and indeed, to our local community.”

You can add your support by signing the petition here: http://chng.it/Zv22YbfP6y

Like many QCA students, the past few weeks have found me ruminating on what stands to be lost.

To understand this better, it might prove prudent to first delve into what it is. Next year will be The Queensland College of Art’s 140th year. An institute older than (unceded) Australian Sovereignty. Those 140 years are a lineage. A stream of knowledge, craftsmanship and creativity that has flowed down the passage of time atop the pebbles and stones of generations of artists.

While the campus itself has ebbed and flowed with the growth and changing of Brisbane, for 140 years this institute has inspired and empowered artists to breathe life into the rapture of their creative minds. By the brush, the pencil, by hand or with camera. QCA has been a first step on the journey for countless artists.

As it stands Griffith proposes this: 44% of QCA staff are to be cut. Compared to only a 4-5% cut for staff throughout the rest of Griffith. The “Proposal for Workplace Change Roadmap to Sustainability” released by Griffith has also outlined the axing of Documentary Photography, Advertisement Photography, Printmaking, Jewellery and Small Object and Creative and Interactive media.

Outrage has rung out from not only the students in these disciplines, but the entirety of the QCA community, the industries that rely on QCA graduates, the staff, and the community. QCA for those unfamiliar to it can be an unwelcoming sight. But for those who call it home, the cold, concrete and steel railings are but a canopy. Under which an ecosystem flourishes. An ecosystem of those lucky enough to find ourselves learning and growing from its studios and lecture halls. One where degrees don’t box us in, but rather where the multiple disciplines of the creative arts find themselves intertwined. Like vines, growing and exploring the forest together. A painter would be lost without the eye of the documentary photographer. A sculptor might sit idle and uninspired without the scratches of pencil to paper by one of her drawing peers.

What QCA doesn’t have, despite executive misconceptions, is stand-alone (expendable) degrees. What QCA has is a flourishing garden of beautiful flowers, shrubs and ferns, all thrive together. All stand as a brilliant mosaic of life and beauty.

I am a documentary photographer. I, and my peers, are reeling from the possibility that our degree may not be around for generations of photojournalists to come. There is only one other university in Australia that provides a degree in this space.

Still image is a fundamental part of the fourth estate of our democracy. Journalism was in dire straits before COVID, the online medium has crippled the worlds media, and has left newspapers, magazines and other news outlets seeking multi-skilled journalists, to cut down on costs. This is exactly what this major, within the Bachelor of Photography provides. I, and my peers, while on internships are consistently out-doing the journalism students at their own game. Yet, because of the sheer mass of communications students that come through, apparently that degree is thriving.

Education has been cut down, and gutted: butchered. In this we see the truest soul of Griffith. It is not an institute for education, it is a lifeless, bureaucracy riddled, cash cow. If we continue along this trajectory, prioritising profit over a quality education (most of the degrees/majors to be cut had upwards of 70-80% student approval ratings), then we risk corrupting the fundamental goal of any education. To educate.

If making a profit is on par or higher than that goal, or as we have here, stands in opposition to it. An ugly blot begins to stain the snowy white letters that spell out “GRIFFITH.” That book that it stands upon may just be an account book, for now we know where the priorities lie. Keep in mind all this is happening while Griffith goes ahead with a $1 billion plan to move from Mt Gravatt to Roma Street. Touching up their Gold Coast campus with a nice $80 million new Bioengineering centre. Yes, we’ve been shown the figures. The numbers add up, as numbers do. But remind me when we began to quantify the colour yellow and the beauty it brings to any room it’s in.

How does one reduce images of emotion? What’s worth more? Loss, love or lethargy? How might I go about producing a mathematical formula to explain just how a certain sculpture makes me feel. Or how a drawing reminds me of my childhood. Art delves into the human condition, so much so that it has been argued that we make it, as much as it makes us. To wonder where we might be without it, is scary path to tread.