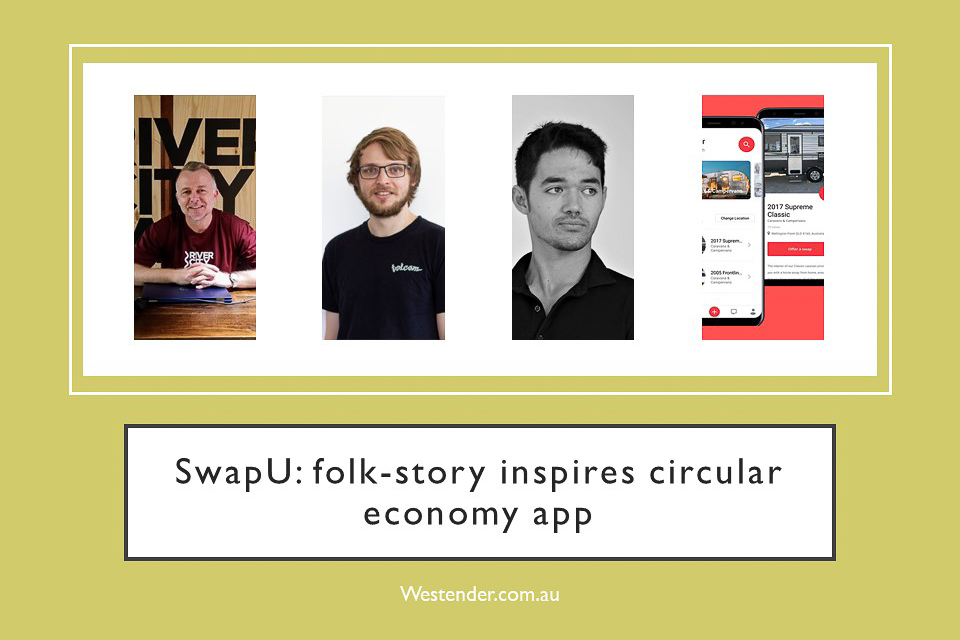 One way to join the circular economy, say the developers of the new SwapU app, is by swapping your unwanted goods.

Nic Robertson, Jordan Piggott, and Chad Fallotin are the South Brisbane and Fortitude Valley based team responsible for a new app designed to enable people to exchange second-hand goods.

Founder and CEO, Nic Robertson, says the European folk story Stone Soup provided the impetus for the SwapU app. In the Stone Soup story, he says, a traveller teaches some villagers how to share resources for the betterment of the entire community.

“I concluded that sharing and swapping had many similarities that should be explored.  Beyond that, I know that we have enough goods already and that many goods are dormant and then become trash, and all for nothing.  All the while we keep working, making money and then throwing away what we have worked for. This doesn’t make much sense,” Nic told the Westender.

The aims of SwapU, its inventors say, is to make swapping easy and convenient, and importantly, to keep useful goods circulating in the community, rather than gathering dust at home.

People can download the app and choose their areas of interest as well as the sort of items they would like to exchange them for.

The team says that you can swap anything you own that you believe has a value to someone else – except of course if it’s illegal.

“You can be as broad or as specific as you like”, Nic says, “on SwapU we have everything from cars all the way to clothes and shoes”.

The app allows users to upload images of the items they would like to swap and to provide a description.

“From there they can offer their item to others or receive offers from others.  Users can also indicate that they would like to include cash in their swap offer.  Once the swappers agree to talk and negotiate their swap, they are taken to a chat room where they can discuss the details and arrange a delivery with our delivery partner if required”, Nic said.

Contributing to the circular economy

Nic says that swapping is a great way to trade goods that hold value that does not always translate into cash value.  And, he says, goods that are swapped get more use.  What was once deemed as unnecessary in someone’s life is now being used by another.

“By circulating goods through swapping, we re-use them and extend their lifespan.  This decreases pollution created in the endless production of goods.  Add to that the connection that we provide to deliveries then you can really see how goods are re-used and then re-circulated.”

“Often we hold on to items because we cannot get the cash price that we want on a site like Gumtree.  We believe it holds more value than the cash value offered so we keep it.  The item then becomes dormant and degrades until eventually it is not able to be used and it becomes wastage.  At one point in the life of that item it held value but not cash value, it held value that could be exchanged for another item”.

The team wants us to imagine items being passed along and used until they are no longer needed, and then passed on to someone who has a new need for it in exchange for something else.

“These goods are more than just goods; they can be the gateway to new experiences for people and should not be locked behind the medium of cash.  These experiences can be traded for other experiences.”

“This is what SwapU wants to achieve, ownership evolved, and experiences expanded,” Nic Robertson says.

So far SwapU has had 1100 downloads with over 260 successful swaps.

“We have a statement of support from Planet Ark and have received support from a local government to be included as a part of their recycling education practices for their residents.”

The app and the process of swapping is free – the only cost is for delivery if needed.