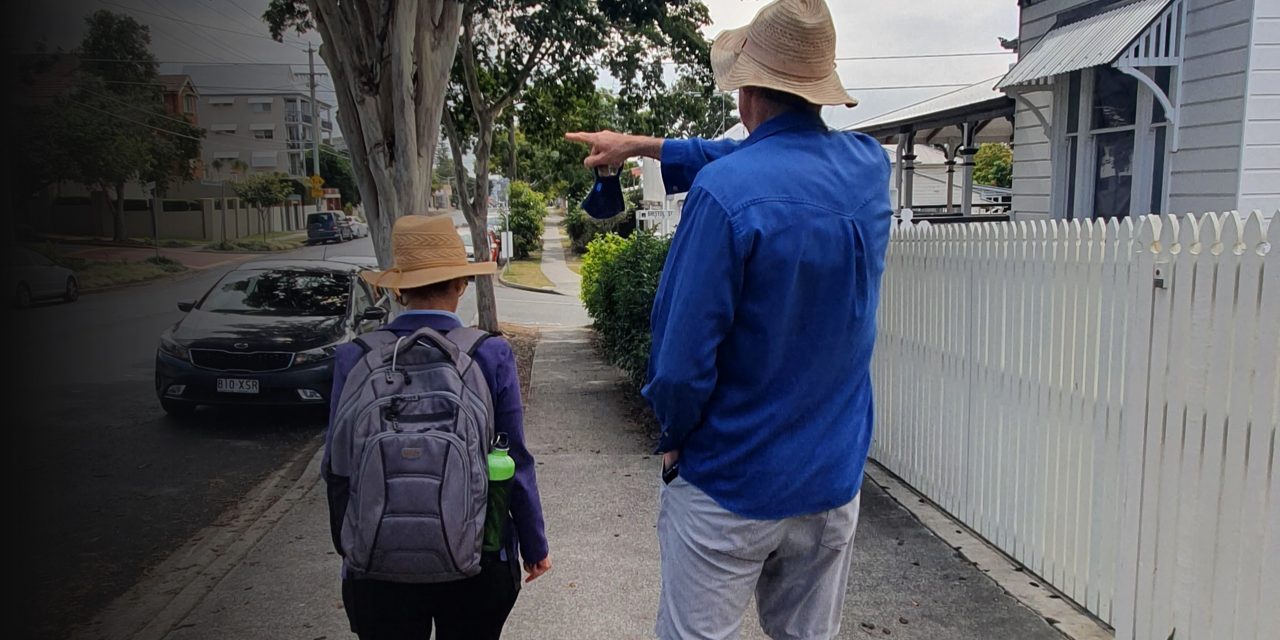 It’s not often that you get the opportunity to walk your suburb with a person that specialises in advocating for more walkable environments, but last week I had the pleasure of taking Queensland Walks EO Anna Campbell on a short walk in West End. As a former resident of West End, Anna relished a visit to the area.

We chatted about walkability, pedestrian comfort, and safety.

I asked Anna why she thinks West End is a walkable suburb.

“One of the lovely things about West End is the many and varied shops and the cafes and all the places you can stop and meet people, and they’re places you’re attracted to. Boundary Street is a perfect destination – it is why West End thrives and what makes it unique. Unlike some suburbs, one can easily live in West End without the need for a private vehicle with good public transport and investment in active transport.

I’ve also started to see some excellent improvements around West End to improve walkability. We’ve seen some footpath widening, some wider curb ramps, for example at the zebra crossing near West End State School. We’d love to see it as a raised priority crossing, but it’s definitely an improvement to what was there before. There’s also some pleasant shade planting, and more to come.

I love walking in West End – it’s a really walkable community, and there are many more people walking and wheeling, I think because unique businesses are within walking distance.

My local neighbourhood is a car-dominated suburb. And so, you wouldn’t see nearly as many people walking around as you do in West End. People stopped us in the street and asked us what we’re up to – we don’t always get that in other communities. So, that’s a fantastic display of a community that wants to talk and engage with one another. An illustration of a walk-friendly street.

We also saw some exciting architecture along the way, and that makes a street-front really interesting. And there are pretty active street fronts. Active street fronts are engaged places that are not blocked by high fences. That means people can come and go from the building easily, and it means that there’s a little bit of passive or casual surveillance – it feels like there’s something happening – it’s active. That’s important from what they call Crime Prevention Through Environmental Design – it reduces crime. It also means that it connects the community, so people don’t run inside their homes and lock the doors – it creates a sense of community engagement and belonging.

During COVID, where there’s a lot more social isolation and loneliness, active street frontage makes an enormous difference in connecting people. And when people are still living by themselves, having an open space where people can walk past and still have a conversation while socially distancing is so important.

Lovely to see our suburb through fresh eyes with Anna Campbell and Ben of @QueenslandWalks and to talk #QldWalksMonth. Lots of positives for walkers inc, destination shops, shade trees, but still more we could do.#walking #pedestrians #westend pic.twitter.com/pHE0XGsaeF

The older style shopfronts in Boundary Street create shelter from sun and rain over the footpath which is extraordinary. This is so often overlooked in the urban environment, particularly in a sub-tropical environment. We’ve seen some bus stops where the shelter is part of the shop front. And that’s brilliant. It means that people will sit there and they’re more likely to spend a bit of money in nearby small businesses while they’re waiting for the bus.

The pocket park on Vulture Street [Bunyapa Park] is gorgeous. And we know, in places like West End, there isn’t a huge amount of extra access to green space. So little pocket parks like that are an enormous value to the community. They don’t require much investment, they do not induce congestion as they are a park to walk to, so we would like to see more of that park style across Brisbane. There are toilets and access to water; it’s close to public transport – people were resting, someone was even having a nap before the next destination. What would be nice to see is a raised priority crossing in front or nearby the park which would make a massive difference by slowing the traffic and allowing people to get across to the bus stop on the other side. We noticed a mother and pram trying to cross at this location, without a crossing, this is hard for many people to cross.

Another thing we saw was a scramble crossing in front of the school – that was amazing. And makes it so much easier for people to cross in different directions without additional delays in the full sun and heat.”

Shade and places to rest are attractive for walkers. @QueenslandWalks

What needs to improve?

“There are a lot of places we saw where the footpath needs widening to accommodate increasing population and accommodate for additional users on the footpath. We used the snap send solve app to show how we can do some maintenance where there are trip hazards and footpath drop-offs.

Pedestrian refuges [the little islands in the middle of a crossing as seen on Hardgrave Road] are interesting because they do create a break or refuge between traffic. However, if you are standing there and trucks are coming past or speeding cars, you can feel incredibly vulnerable. Queensland studies are starting to reveal that pedestrian refuges do not create a comfortable environment for people walking, and most people walking would much prefer a raised priority crossing (like a wombat crossing).

One of the principles of walkability is comfort. Increasing walkability means that more people can walk more often, which benefits every single person in the community.  We’ve found growing evidence that supports this idea, from surveys conducted at schools developed to capture parental concerns about children walking and cycling to a local state school. The data revealed that 89% of parents were either very concerned (30%) or somewhat concerned (59%) about their children using theses crossings. 81% of parents were not concerned about children using raised or zebra crossings likely because of the comfort and ease and the increasing safety they provide. Unlike a pedestrian refuge, a crossing also reduces speed and requires vehicles to stop, rather than the continual traffic flow.”

Queensland Walks Month is a celebration of walking.

Queensland Walks Month started on 1 September and runs for the rest of the month until 2 October.

“We’re excited to run the campaign over a month (we’ve previously run it for one week). Having a month means that we can focus on particular areas of interest in walking. For example, some people walk for recreation – it is the most popular recreational activity, yet it is the least funded when compared to other recreational activities. So, we wanted to start strong with walking for recreation and get people to show us where they walk for pleasure and relaxation. We’re asking Queenslanders to take a photo or a video or tell us a walking story. Some people are even submitting poems and haikus about where they walk and what they love about walking, so we’re really excited.

You submit can submit your stories and images on our website.

If you register and make a submission, you can go into the running for our weekly prizes ($150 Frankie4 vouchers, Heart Foundation, 10,000 Steps and Cancer Council Queensland prize packs, as well as the bit $500 catered lunch for the team or group thanks to Snap Send Solve).

In week two, we’re going to focus on walking for health. We’re highlighting programs like Heart Foundation Walking and 10,000 Steps and ways you can do more for your health. That can also include walking your kids to and from school and encouraging kids to do a little bit more incidental activity.

The third week will be about looking at public transport or walking as a mode of transport. So, we’d like to highlight the many ways that people who are able to choose walking as a form of transport and focus on the connectors – for example the buses, the bus stops, shelters, seats and train stations and we’re looking to learn what makes walkable spaces for walking as a method of transport.

And then, in the fourth week, we’re going to focus on walkability, which includes some of those things that we saw along the way in West End about pocket parks, raised or zebra crossings, trees and shaded places, verge gardens, local shops and more.

Not many people notice some of the things that make for more engaging spaces, so we want to unpack those a little bit for Queenslanders and generate a discussion.

The campaign is open to all Queenslanders, and it’s free. You don’t have to do steps – you don’t have to fundraise; it’s just about bringing the community together and celebrating walking.

We’re excited to be encouraging conversations about inclusion and accessibility, so our theme this year is ‘Celebrate Walking: Every Body, Every Place’.

We want to make sure that all spaces are walkable for everyone. It doesn’t matter if you’re in a wheelchair or have a mobility or a wheelie walker, or if you’re a slower runner or stroller; it’s about what’s walkable for you.”