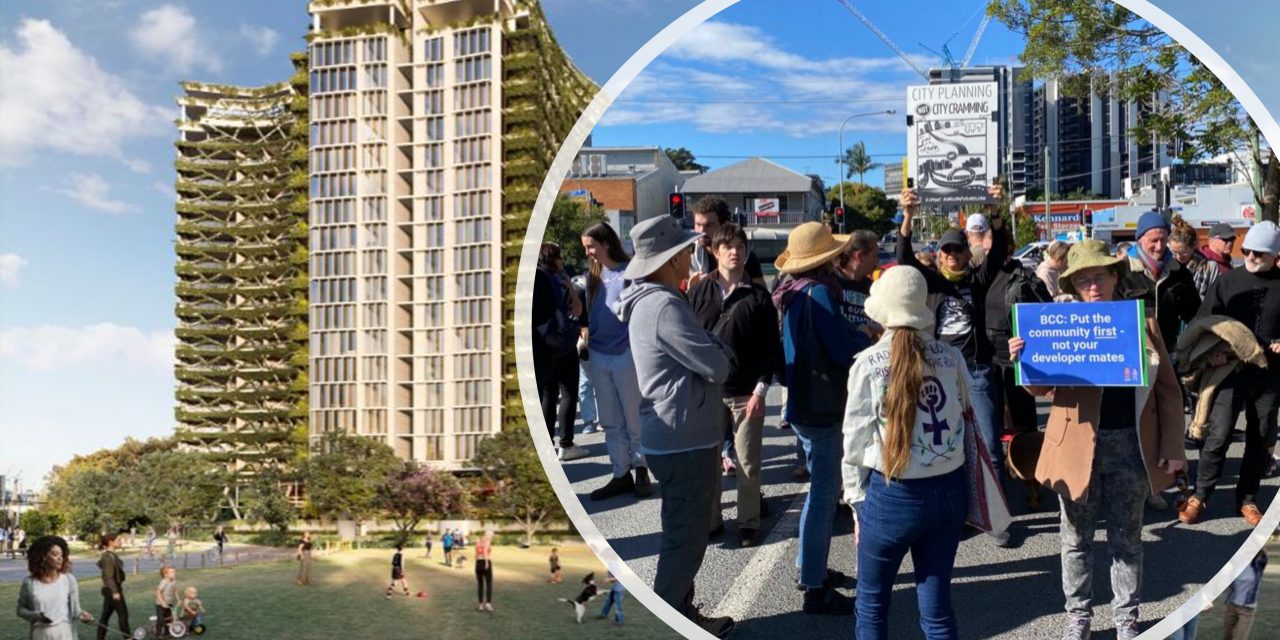 Recent developments in Highgate Hill, West End and South Brisbane have galvanised community responses that have led a developer to adjust their plans to “better meet community expectations”.

Nevertheless, community objections continued at a protest at Davies Park on Saturday 19 June.

The developer says the revised plan better aligns with community expectations by reducing the height by five storeys for the northern tower and six levels for the southern building.

However, those objecting to the development argue that 18 and 20 -storey towers do not align with community expectations for the site.

“20 storeys overshadowing one of the little pieces of green space we have in that area, and what would equate to around 500 new cars on an already congested road, does not align with community expectations.”

On Saturday, 18 June, Gabba Ward Councillor Jonathan Sri, Amy McMahon MP, and newly-minted Housing Spokesperson for The Greens, Max Chandler-Mather, organised a protest at the site. They called on local suppliers to the development industry to withhold their products or services from what they labelled non-compliant and subpar projects.

The protest, which attracted about 50 residents, started at Davies Park and walked to Hansons Concrete Batch on Hoskings Street in South Brisbane.

Ms MacMahon is promoting a petition against the development, calling on the Lord Mayor Adrian Schrinner & the Deputy Premier Steven Miles to reject the development application.

The group was also targeting a recently approved development application at 5 Dudley St, Highgate Hill, which they argue will replace existing affordable units with luxury apartments. Speakers included residents of the existing apartment block who face an uncertain future and representatives of the Growing Forward gardening group, which manages the community garden adjacent to the site.

“Working families and long-term locals are getting kicked out of our neighbourhoods as greedy property developers, backed by their mates in Council, continue to build luxury, unaffordable apartments,” Ms McMahon posted on Facebook.

“We are making it clear to the property development industry and to Brisbane City Council that the community is ready to disrupt work if our demands for sustainable development and affordable housing aren’t met.”

WECA said in its recent update that the approved building exceeds the allowable height limit of two-three storeys under Low Medium Residential Zoning.

“Sadly, for the development to be realised, long standing residents of Riverdale will be displaced.”

In its submission to Council, WECA said it raised concerns that approval of the Development Application signals to the industry that zoning is irrelevant.

“This approval will unlock numerous properties (older apartment buildings held in single ownership) for new development within areas of Traditional Character Housing. All the Low Medium Residential Zone (coral colour) have the potential for 4 storeys plus roof terrace. This practice will expose many established residents to homelessness, housing insecurity, isolation from their community and the potential for increased rough sleeping within the peninsula.”

“Displacement impacts will fall on the most vulnerable residents and our local community service providers say there is no stock available in our area, so hotel stays for a few days are generally all that’s available – there are thousands on social housing lists currently,” WECA said in an update to members.

Thanks to West End Community Association for providing their recent update.

The battle for Riviera: What is happening at 5 Dudley Street?