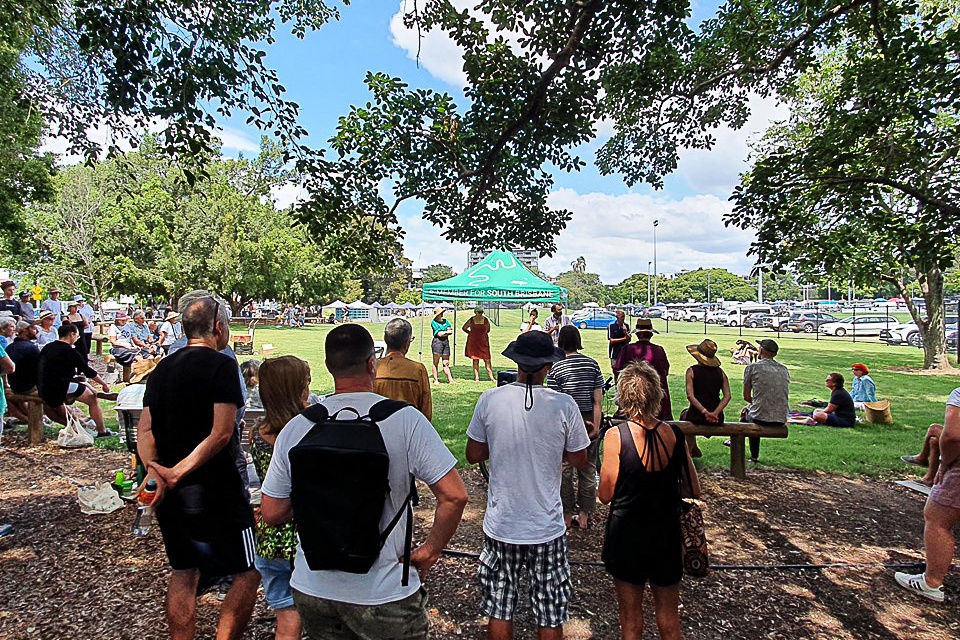 Residents met under the trees at Davies Park on Saturday to discuss the controversial development application by Henroth Investments and Manly Properties at 281-297 Montague Road in West End. The proposed development borders Davies Park.

The developer has an existing approval for five residential buildings on the site comprising two 12 storey buildings and three six-storey buildings, food and drink outlets, 602 car spaces, with 58 per cent of the site cover. Their new proposal is for two towers of 26 storeys, 470 units, 741 car parks, and 730 bike spaces, with 1101m2 for food and drink outlets and site cover of 38 per cent. A small park is proposed for the southern side of the site.

The revised plan seeks approval for the additional height in exchange for the provision of a small (4,000m2) public park and open space.

Community group Kurilpa Futures said in a submission to Council that the development would set a precedent for excessive height in the Riverside South Precinct of the South Brisbane Riverside Neighbourhood Plan.

“It is an example of maximising the number of units without concern for the wellbeing and lifestyle of the residents or any benefit to the local community and with no attempt to achieve high-quality urban design,” the Group wrote in its submission.

At Saturday’s forum, Ms MacMahon asked whether the community should be demanding the development fits within the confines of the Neighbourhood Plan or whether residents want to push for something more.

“This development is going to overshadow Davies Park. Should we be pushing even further and saying that there’s a solid case here for the Council and the State Government to step in and acquire this whole space to meaningfully extend Davies Park and give the community some of the green space that we actually need,” Ms MacMahon asked.

Ms MacMahon told the gathering that the developer is holding a metaphorical ‘knife’ over the heads of the community by saying, “you get this tiny little bit of parkland, or [if rejected] we’re going to give you something that is subpar”.

“This is set against the challenges our neighbourhood is already facing in terms of congestion and in terms of pressure on local infrastructure.”

“The site was originally zoned ‘Park’. Let’s be clear about what ‘Park’ is. It’s publicly owned land, held in perpetuity for public access. It’s what cities need, and it’s what makes cities liveable,” Ms More said.

“Those who have been around for a while will tell you that we’ve had many struggles against unsustainable poorly planned development. Some of us are really tired and sick of having to fight these campaigns.”

“We’ve had some developments that have attracted hundreds and hundreds of detailed, thoughtful written submissions where people take the time and write really compelling evidence-based arguments against poorly designed projects, and the things still get approved,” Cr Sri said.

Council feels the pressure when the community is willing to take to the street and cause a “little bit of disruption and inconvenience”, Cr Sri said.

“And I would suggest to you that recent history and evidence shows that unless we’re willing to be a little bit more militant and a little bit more disruptive, this is just going to keep happening. We’re going to go through this same cycle of signing the petitions, writing the submissions, feeling powerless.”

The gathering went on to discuss tactics and fielded a range of options.

One resident proposed that instead of mounting a negative campaign, the Olympics in 2032 could provide an incentive for Council and State Government to create destination parklands in West End. Ruth Christie from Kurilpa Futures said that Expo 88 had provided the impetus for developing parkland on South Bank and agreed that the Olympics could stimulate something similar in West End.

Another resident said she liked the idea of presenting both protest and a positive vision.

“I think that’s a compelling idea. And I’d be prepared to block traffic. That wouldn’t be very hard: blocking the intersection of Vulture and Montague in front of where the development is going to go.”

A local bus-driver attending the forum said he has been caught in protests blocking main streets and thinks disruptive tactics risk losing community support. He said a more practical approach might be to protest in the developers’ driveways.

Phil Heywood representing Kurilpa Futures encouraged people to use available processes and legal mechanisms if they can.

“… before we go away and think about direct action and civil disobedience, there are some very practical things we can do inside the system, that we should do,” Mr Heywood said.

“It’s fine to go and protest and break the laws when we have to: I’m all in favour of that. First of all, let’s see if we can change the laws and get a new plan for this whole peninsula. Get this scheme here tossed out by the Council with such wringing condemnation that it casts a shadow on the whole idea of performance-based planning.”

The general mood of those gathered was to opt for some sort of direct action. Residents agreed to continue to meet to discuss options and plan tactics.

For more local development news go to this link: https://westender.com.au/discussing/developments/