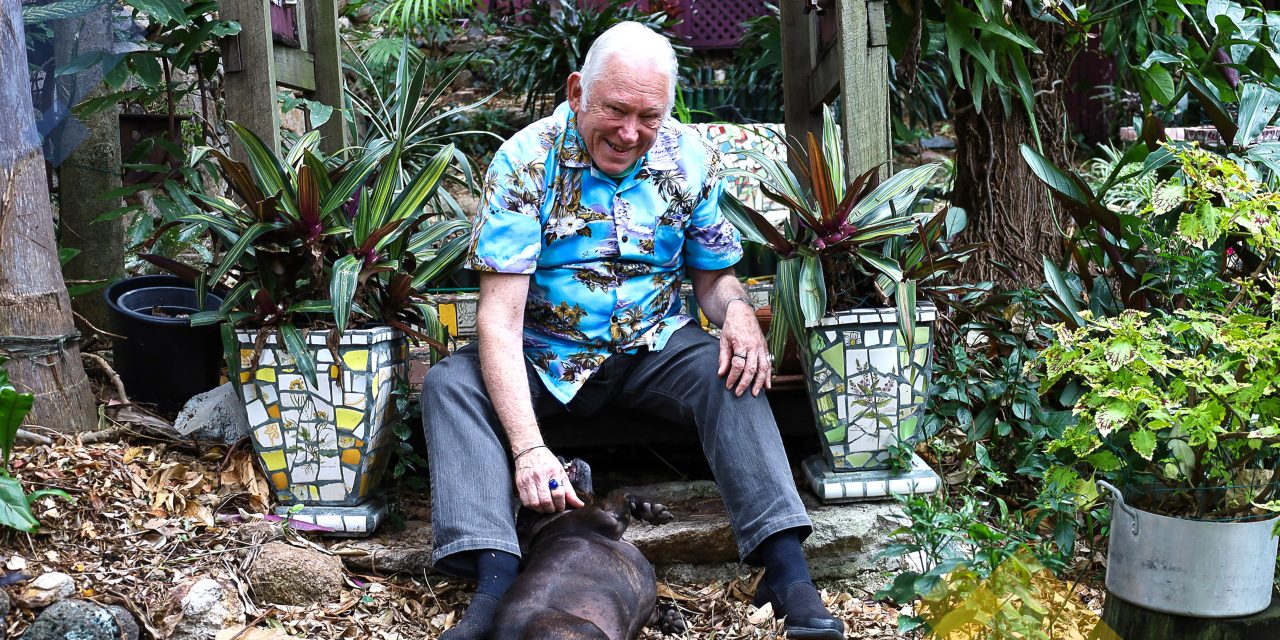 The lovely 1910 West End house they walk out of is comfortable: it’s a north facing backyard perfect for growing things and building beautiful landscapes.

Glenn morning’s walk has followed the classic dog owner’s routine for nearly 20 years with Staffordshire terriers Bess and now Fella. By 5.00 am the dog gets restless; Fella arrives at Glenn’s bedside “are you awake” he nudges him and by 5.30am Glenn gives in and reaches for his walking shoes. Fella is in heaven; to Fella the daily walk is all about reading the daily news, accumulated knowledge about who urinated at tree six, the tamarind tree on Dornoch Terrace, and other important dog information. Fella is practically human and a protective dog, permanently aware of Glenn’s movements. They move onto the porch of Glenn’s shaded house on the side of the hill. The day has begun.

Later, on their way back, on this hot summer’s Saturday morning, the sun blazes down on them. Glenn always takes the long way home, partly because he has no choice. Fella, one of the most muscle-bound dogs I’ve ever seen and refuses to have a short walk. He’s got to make it up that hill near the bridge to feel like he’s done a full day’s walk. They make it up the hill, struggling at times with the two bags of groceries, knowing that shade will arrive and with that a drop in temperature of about 5 degrees. 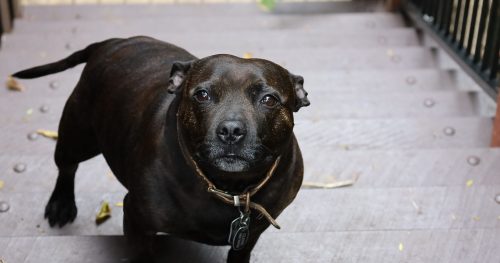 I have come here to visit Glenn’s garden again, a backyard that has significant appeal with a diverse array of large trees, mosaic lined ponds, and quirky decorative elements all contained on four levels in peaceful surroundings.

All on this small West End back block which featured on the TV program ‘Gardening Australia’ in 2015. [Link below] 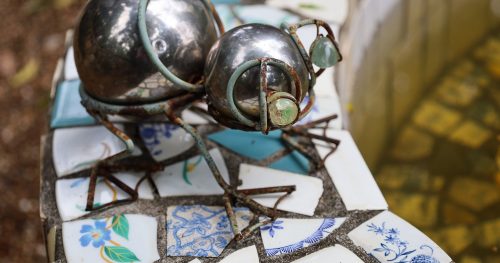 Fella welcomes me with a large shin lick. The house is packed with various objects of art and the only free spaces in this part of the lounge and dining room are dominated with plants. Instantly my eyes are drawn to the backyard which today is at its shining best. The rains have helped.

The back deck is a potted paradise of at least forty plants, barely leaving elbow room for one to get across to the stairs.  Glenn refers to the deck as a ‘tree house’ and has stairs that runs down into the garden. Halfway down the stairs the trunk of a huge Jacaranda tree that looks like the bow of an enormous ship, comes sailing into view from the left.  I’m taken by the massiveness of the tree which Glenn planted, and behind it, a large eucalyptus and a poinciana form a dappled area of light perfect for what’s growing underneath.

“My interest in gardening started at the age of seven, “Glenn said.

“My father had his veggie patch and a collection of fruit trees and grape vines and there was plenty of space in out half-acre block in Blackall for me to experiment with growing succulents. I followed the example of Dad’s two sisters who were also keen gardeners but shrubs and colourful annuals were their forte. There I learned the lessons of working with heavy clay soil.”

Glenn came from the country to work in Brisbane in the late 1960s and returned in 1981 to take up a position as Curator of Decorative Arts with the Queensland Art Gallery. He lived with close access to public transport in Melbourne and Washington and decided he could do better here, and walk to work. A car became irrelevant until he needed to hire one to visit family and friends in Blackall, Rockhampton or Newcastle.  And naturally, West End was where he decided to buy a house despite comments such as, “Why would you want to live in that slum?” How things have changed! 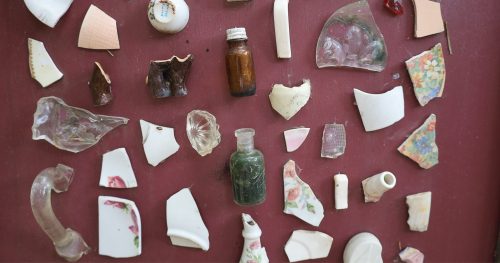 A collage of found objects from the garden.

People forget how hilly Brisbane’s inner suburbs really are and like many of the properties in these streets of West End the house is perched at the front of a block with the back sloping steeply away.

“The front verandah was where you sat and chatted to passing neighbours in the evenings before the advent of TV,” Glenn said.

“When I moved in, the backyard resembled a rubbish dump and while I didn’t find ‘the kitchen sink’, I found a typewriter and a baby’s stroller . . . and a lonely clothes hoist”.

When Glenn first moved into this property, he was told there was a water hole that used to be part of an old creek which had been filled in over the years. While he dug this area he found a myriad of small, discarded bottles, neighbours suggested that the house over the back fence had been owned by a local pharmacist. And there was also a host of broken pottery and other objects, some dating back to the 1890s which inspired the idea of reuse for the garden.

“I started this work in the garden with the idea that I would use recycled objects as part of the furniture, art work and structure in the garden”. 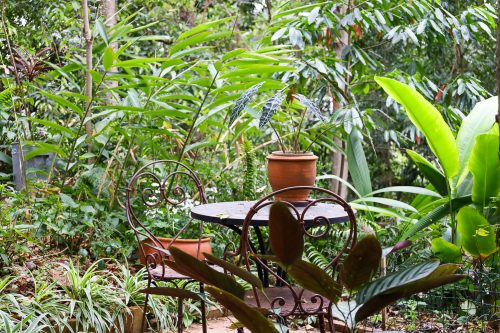 This was the beginning of unrelenting collecting that has lasted for over thirty years. Glenn was one of the early recyclers. The streets were great hunting grounds: the assortment of odd shaped pieces of timber were extracted from various skips to make a fence, and discarded stools find reuse as plant stands. And he still collects fallen leaves from the gutters to mulch his garden.

There are four levels of garden. Two separate paths lead from the house where plants are low growing, dense and colourful. I’m drawn to the intensity and beauty of the planted space.  Then there is a paved area with chairs made of rugged dark brown steel with a dark slate mosaic table and recycled green painted wrought iron gates then steps up to the Hidden Garden.

The colours in this section of garden, focussing on the mosaic pond, are stunning in the intense sunlight. The pond looks like a huge drop of water lying on its side. The front section or pointy end is aimed towards the house, it demands investigation and contemplation. The beautifully soft brown pebbled section that surrounds the pond gives one a sense of fine shifting of rock underfoot. This is framed with green wine bottles, happily headfirst and dug deep into the soil, they act as the edge of a curve garden bed. The natural beauty of this section is enhanced with added trees, plants and artefacts from many parts of the country. This is a remarkable aspect of West End and its hidden backyards, treasures of divergent history, ethnicism, and culture.

“My work for the Queensland Art Gallery never seemed arduous. I loved the work I had chosen,” Glen said.

Decorative art is one of his most cherished interests, but he extended his pursuits to Queensland’s visual arts heritage. Interestingly, one of his major research projects focused on the woodcarver, sculptor, potter and teacher L J Harvey (1873-1948) who lived at Gray Road in Hill End.

Glenn’s first retirement project was to establish a database of the paintings of a former West End local, Margaret Olley, who used to live in Morry Street. Thousands of her paintings have been documented and illustrated. [See link below]

Glenn has an array of artistic interests. He has published extensively on fine and decorative arts in Queensland and Australia and has a special interest in cross-cultural influences such as the influence of Aboriginal art in Australia since 1930. His publications are too extensive to list in their entirety but include: ‘L. J. Harvey & his School’ (1982), ‘Carl McConnell: master potter’ (1986), ‘Thorns and Petals’ (1988), ‘A time remembered’ (1995), ‘Lady woodcarvers of Rockhampton’ (2000) and ‘With Heart and Hand, Art pottery in Queensland’ 1900-1950’ (2018). He has also edited collections of essays with a focus on Queensland. ‘Art off centre: placing Queensland art’ (1997), ‘Tropical pleasures: a focus on Queensland gardens’ (2003) ‘It’s all about the Mary: A garden history of Maryborough’ (2012) and he is currently working on the first collection of essays focussing of the visual arts for the Royal Queensland Historical Society.

You may not know Glenn personally but for nearly 30 years he walked through West End Village to the Cultural Centre . . .  he was the guy wearing the colourful Hawaiian shirts (and still does!). His contribution to redesigning, planting, and saving this particular space in West End should be celebrated. He is a very local legend.