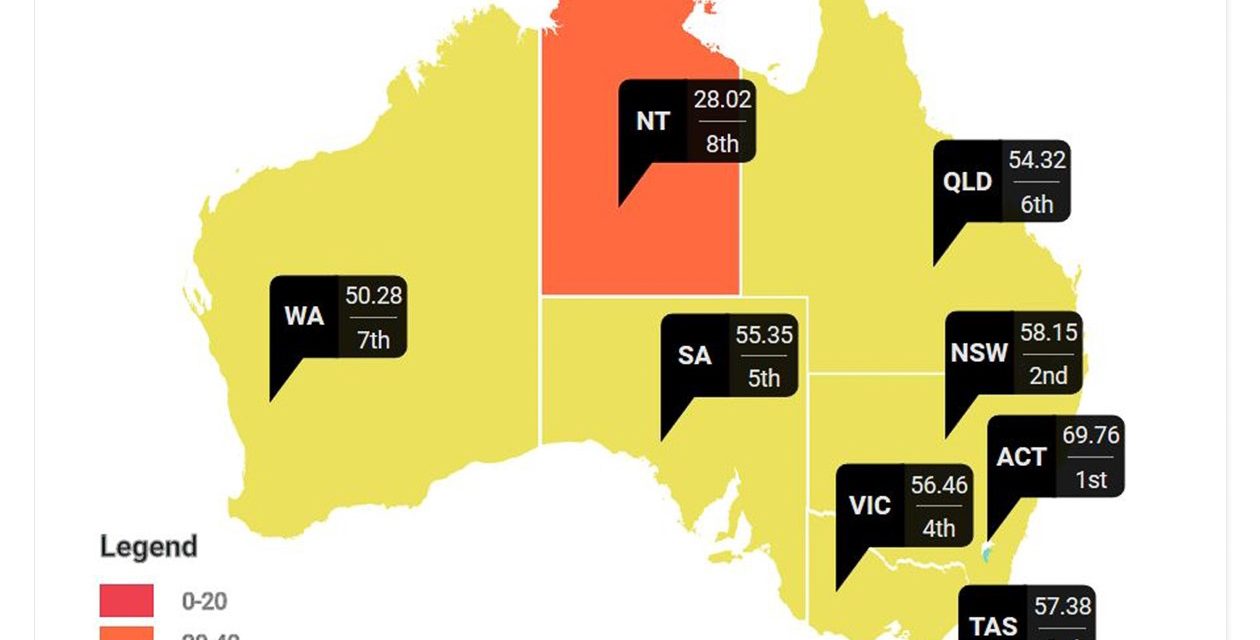 A new index to measure the quality of life for people across Australia has been launched today by leading research organisation the Centre for Social Impact.

The Australian Social Progress Index (SPI), which ranks states and territories on their social progress, will provide the first ever holistic measure of Australia’s social performance that is independent of economic factors.

The state ranked sixth or 52% in the overall SPI scores.

While Queensland scored its best results in nutrition and basic medical care (68.6%), and access to basic knowledge (68%), there is room for improvement in the State in access to information and communication (25%), inclusiveness (35%) and access to advanced education (37%).

“Gross Domestic Product (GDP) can often be a misleading measurement of progress as it tells us nothing about people’s quality of life,” said CSI chief executive Professor Kristy Muir.

“Australia has long needed an index that reveals how the people and environment are faring in each of our states and territories—and this is exactly what the SPI does.”

The SPI is a free online resource that provides governments and organisations with the ability to measure their state or territory’s progress towards meeting people’s basic needs, foundations for wellbeing, and opportunity for all individuals to reach their full potential. It measures indicators key to wellbeing, such as ‘personal rights’, ‘nutrition and basic medical care’, and ‘access to higher education’.

By comparing the jurisdictions and tracking them over time, the index reveals which components of social progress are flourishing and where there are gaps.

“The purpose of the SPI is to ensure a clear, singular vision of what social progress looks like in Australia and encourage and support governments to see the gaps and commit to funding and outcomes solutions,” Professor Muir said. “Importantly, the findings are reflective of the policies and social contexts the states and territories, not an indicator of how progressive actual individuals living in those jurisdictions are,” she said.

Michael Green, chief executive of the US-based Social Progress Imperative which publishes the global Social Progress Index, said, “We are delighted to see the first-ever Australian Social Progress Index released by our partners at the Centre for Social Impact. We look forward to seeing the Index in action, and hope to see Australia’s peers in the G20 and the Asia-Pacific region follow its example in directly measuring social progress.”

The Social Progress Index is already being used in more than 45 countries around the world as a tool to guide policymaking and investment decisions. For example, the European Commission is using the EU Regional Social Progress Index to inform allocation of €350+ billion of ‘Cohesion’ funds to reduce inequalities between regions.

Lead CSI researcher, Dr Megan Weier said that by launching the SPI it is hoped that the conversation and indicators used by governments will advance beyond economic production to include a measurement of social progress. “Countries such as Paraguay have adopted the SPI alongside GDP as its measurable indicator of national development. We want to change the conversation around social outcomes and inequality in Australia using relevant facts and data, not just GDP”.

“We’re excited that for the first time ever, we have a resource that provides a holistic measure of Australia’s social performance that is independent of economic factors,” Ms Weier said.

Story by Press Release from the Centre for Social Impact