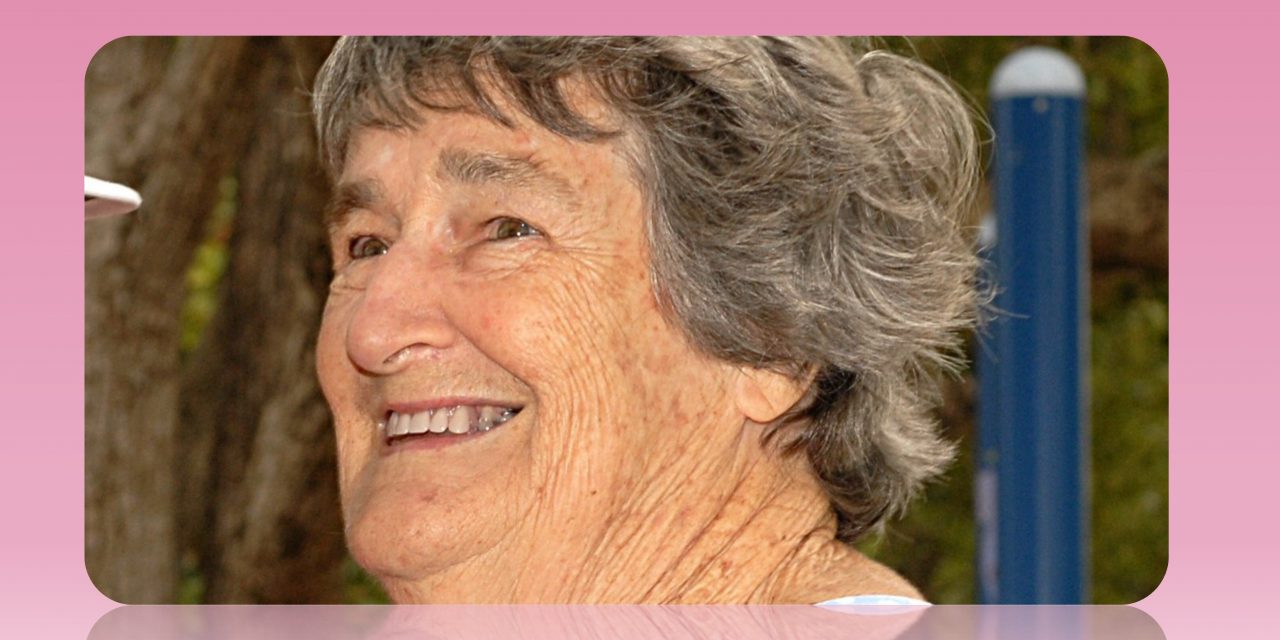 by Tim Quinn, former Councillor for The Gabba and Dutton Park Wards and former Lord Mayor.

The West End community has lost one of its strongest supporters and achievers when much-loved and respected local, Norma Morgan, passed away last week, aged ninety-six.  Although Norma only came to West End about twenty years ago, already at an advanced age, she packed into her time here the energy, action, generosity, and achievements of a whole lifetime. For the previous twenty years she had been involved in successful environmental campaigns when she lived in Far North Queensland

Norma and her husband Bill were key players in the protection of their beloved Mission Beach coastline, an area of tropical coastal significance and home to the southern cassowary. Courtesy of their dogged good-naturedness and vision, they became the drivers behind community efforts to reclassify the Kennedy Reserve as a National Park. This reclassification rose directly from Bill and Norma’s big project – the construction of the Edmund Kennedy Bay Memorial Walking Track.

Many people here in the local Kurilpa community knew Norma. She often sat at chairs on the footpath outside her home welcoming anyone for a cup of tea or happily chatting with those walking by. Her much-loved Australian blue cattle dog Sonny was never far away.

Growing up in Depression-era Newcastle gave Norma a lifelong commitment to social justice and the need for action to ensure a fair go for all people. Her support for local community organisations, especially West End Community House, now Community Plus, was legendary. The time, labour, financial and fund-raising support she contributed was remarkable.

West End Community House, ‘A community has to look after its own.’

“Whether it was volunteering herself, bringing along other volunteers or donating, you could always count on Norma,” Mary Maher, Chair of WECH 2010-14.

In 2020 Mary authored a major article about Norma’s life in the Westender in which she said:

“For more than a decade Norma managed to combine her volunteering at St Vincent de Paul with being up at dawn on Thursday mornings to serve and more importantly to chat, at the Breakfasts for the socially isolated in the 4101 area. She then came back on Friday mornings to spend time with, and serve morning tea for, the Art Group at West End Community House.

Norma also became the poster person for the House’s big fundraiser – Pledge a Plank – to pay for renovating the Croquet Club Hall in Musgrave Park. This is a great asset and now it’s been secured and renovated for general community use.”

“She was also a substantial donor to the House’s operations during the period of deep cuts to its budget under the Newman Government. Considerable funds were raised by approaching members of the Hill End Puppy Club, her beloved off leash dog area owners,” Mary wrote.

“My most vivid memory of Norma is of a community planning meeting at the restored Croquet Club in Musgrave Park. I had been asked to do a warm-up activity. I began by leading the group in a few stretches while they were still seated, and then playfully suggested we could all dance our way into the day. At this point Norma, then in her mid-eighties, propelled herself into the middle of the circle and began jiving with me. I mentioned the impediment of the steel pole in the middle of the room and before I had finished the sentence Norma had grabbed it and went into a pole dance routine, bumping and grinding to an imagined soundtrack. The circle erupted in applause and with Norma’s help the warm-up was complete.”

Norma was a long-term member of the Australian Labor Party. As well as being a passionate supporter of progressive policies and action at local branch meetings, she was a dedicated party worker, regularly letter boxing, conducting street corner stalls and supporting campaign launches. Norma had no hesitation approaching people in high places. Throughout her many campaigns she was on first name terms with then Environment Minister Molly Robson following her environmental campaigning in Mission Beach, and later with Premier Anna Bligh and Prime Minister Kevin Rudd during campaigns for better inner-city development in West End.

“To join with so many others to commemorate and celebrate Norma Morgan’s life, is, in itself, quintessentially, Norma – collectivist, union, and community”

“Norma was deeply respected and loved by so many people and for so many reasons, her selflessness and kindness, her passionate sense of fairness and commitment to community, and her endless joy in and love for Bill, her children, and grandchildren and, of course, Sonny.”

“A long-time Labor Party member and regular volunteer at West End Community House and St Vincent’s, Norma used her time to fight for what was right and in the service of others. From championing environmental protection in Far North Qld to fighting for off-leash parks for locals of the furry variety, from helping socially excluded members of our community to just being in our community with a ready smile and a kind word – Norma Morgan will be missed, and she will be remembered.”

Vikki Uhlmann, long-term friend, and close supporter of Norma in her later years has written:

“I first met Norma around 2005 in a WECA traffic and transport working group. I was impressed by her energy and positivity despite clearly being in the “elderly” category. She seemed to have a knack of drawing people in with her everyday language and modest goals, and she genuinely listened to people. One of WECA’s goals was to reduce traffic congestion by getting people out of their cars. As I had heard of the “walking school bus,” Norma and I started working on that. The idea was to have kids walking to school in a group, rather than being driven. Once we obtained the approval of the P&C President and the Principal, we started two bus routes, one along Hardgrave Road and the other on Boundary Street. Norma chose to join the latter. So, once a week she would drive to the park at the end of the street and walk to school with kids, parents, and dogs. The children treated Norma like their grandmother, asking her questions and telling her their stories. But, if you’re a Westender, you would know that it’s a pretty steep incline up from the park to underneath the Dornoch Terrace overbridge, and eventually she said that she’d have to join the bus at the top. These “buses” became the precursor to the school’s participation in BCC’s Active School Travel program.”

“The walking school bus also began our partnership in crime – as Norma liked to call it – a way of gently disrupting business as usual. And she played the gentle little old lady card well! One night years later when we were going to a community meeting in the Sussex St church, I had to park across the road in Vulture St. There was traffic coming at us as we crossed the road, with me calling out to her to hurry up. But she was not to be hurried, saying something like ‘they wouldn’t dare hit a little old lady.’ I have many, many memories of Norma.”

Helen Abrahams, local Councillor for most of Norma’s years in West End, remembers that:

“Norma had a firm sense of what was right. One such belief was that dogs should not be on a lead as it prevented play with other dogs and made them more aggressive. Her beloved Blue Heelers, Shadow and then Sonny, were rarely seen on a lead, which inevitably meant that Norma and her dog were well known to Council dog inspectors. “

“Norma had a firm belief that her Council representative would weave magic and prevent the fines. But in fact, it was Norma’s personality that avoided serious action by Council. She always sounded so reasonable.”

But Norma also took action. She started a campaign for a dog off leash area, even though, in principle, she did not support dogs being enclosed. It took two years to achieve a dog off leash area that had access to the river in spite of opposition from some community members. During this time, Norma was a regular caller to the local radio station. With a gentle humour, she would put her case and then finish by saying that if the Lord Mayor could just hear her arguments, the problem would be solved because he had the power to bring about change. The radio station loved her as did her community.”

Norma and her husband Bill were best mates who shared many campaigns, travels, and adventures. She cared for Bill in his later years before he passed away in 2019. In recent years Norma had the ever-reliable, strong support and care in her home of her long-term, close friends Vikki Uhlmann and Annie Cowling. They also called on other locals for help from time to time as required.

As her many friends and the local community celebrate the life that Norma lived on her life-long journey, we do well to reflect on the many lessons she provided for us throughout her full, committed, and generous life, so well lived in the support of other people and her community.

A celebration of Norma’s life will be held in Orleigh Park on Sunday 16 January. Details at link