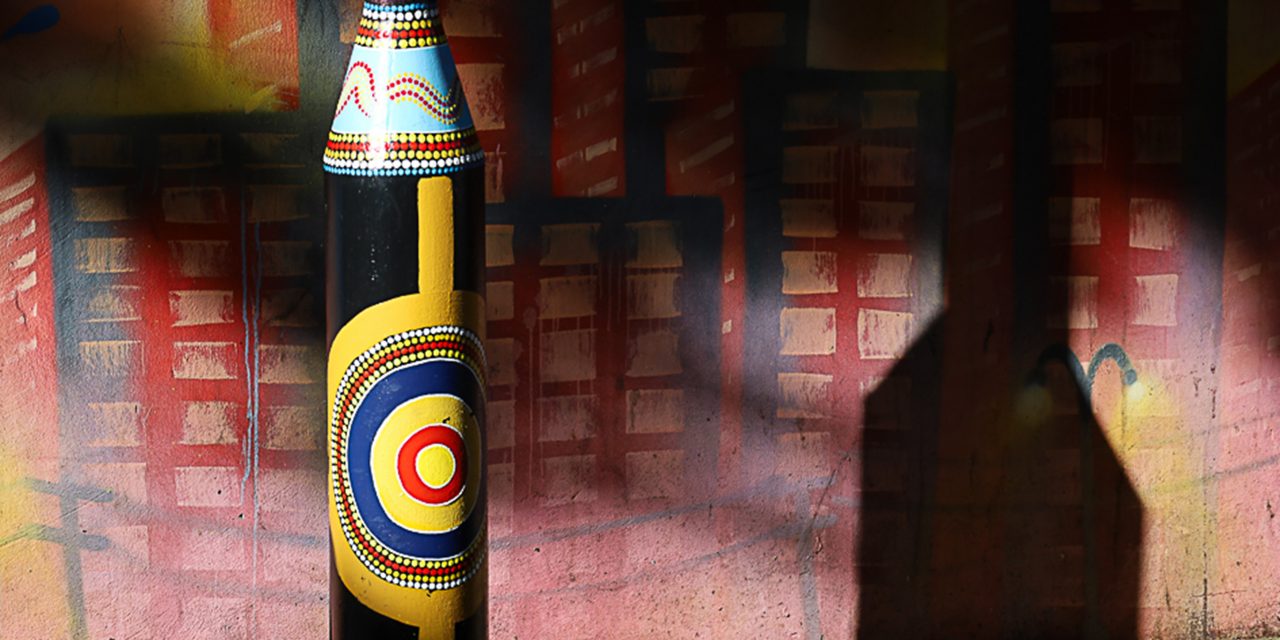 One of the heart-warming things to have occurred in Boundary Street over the last two or three years has been the love and support for People’s Park and the people who gather there.

Regular performances and workshops have enlivened the Park: the planting project by Kurilpa Futures that kicked things off in December 2019; the return of Triple A to the kiosk for regular broadcasts; meals provided by Food not Bombs, music by the Whoopee-Do Crew, the Kiosk Art Gang and events hosted by West End Community House; and West End Community Association’s (WECA) support for the space through arts and Neta Rei Mabo’s striking Breaking Boundaries mural at the back of the Park.

On Friday evening, 10 December, WECA launched the most recent installation – a Gobo Projector, providing creative lighting into the Park, while showcasing the works of First Nations artists.

The launch doubled as a community celebration featuring music by Whoopee-Do Crew with Jenny Pineapple, a wonderful musical acknowledgement to country by Dawn Daylight, and an exhibition of works by the Kiosk Art Gang.

A highlight of the evening was the performance by Jungaji and his son Dean Brady.

But the man of the moment was artist and Yimen/Jiman man, Duane Doyle. Over the past year, Uncle Duane has painted the poles, rails and posts in the Park in intricate detail. Now his art will light the Park each evening.

“When I arrived in Brisbane in 2018, I used just four colours – today I use twenty-four different colours. They were given to me by my brothers and sisters, my aunties, and uncles from the Art Gang at West End Community House,” Uncle Duane said.

“It hasn’t been an easy journey here in Boundary Street, but I’ve had a lot of strong people who picked me up when I was down crying.”

Duane Doyle with his daughter. Image by Elizabeth Cowie.

The first artwork projected into People’s Park is titled, “Taking ownership of our own conflict upon each other.”

“This artwork has been painted in Hope for our strong Aboriginal men to join me to take responsibility against excessive alcohol, drugs and gambling abuse including violent sexual behaviour which is contributing to family violence to our Aboriginal culture,” Uncle Duane said on Facebook.

Some of the WECA team, Nancy Cole with Harmony Downes and Seleanah More.

Seleanah Moore, President of WECA, said it had been an amazing privilege to collaborate with the artists on the project. Paying respect to traditional custodians and elders past and present, Ms Moore acknowledged that we all work, live, and play on unceded lands: this she said was the foundation for their approach to the space.

Ms Moore acknowledged the grant facilitated by Federal Member for Griffith Terry Butler for the mural by Neta Rei Mabo and the contributions of Brisbane City Council and Councillor Jonathan Sri for the current project. She said that often a lot of money and investment goes into creating public spaces for architects, designers, and planners.

“But People’s Park is a collaborative community effort and a labour of love for many.”

The Breaking Boundaries mural, Ms More said, came about through a series of yarning circles in the Park.

“For me, it felt like it was bringing real women’s energy to the space, which is really needed. And that’s been a really beautiful thing to be a part of.”

She made particular mention of Nancy Cole and Harmony Downes for steering the project for WECA.

Jem Sparkles and Jenny Pineapple of the Whoopee-Do Crew.

Dan Rennie, Manager at 4AAA Murri Radio, said that while the Park is not the prettiest space in the world, “There is a lot of love here – the people that come make it amazing.”

Councillor Jonathan Sri said he couldn’t wait to see how the space will evolve over the next few years.

“And I’m really, really grateful to everyone who’s been part of this project and to everyone who just hangs out in this space and makes it what it is,” Cr Sri said at the launch.

“I was reflecting today on how West End has resisted some of the types of gentrification that other neighbourhoods have been exposed to, and it’s kind of cool that we’ve been able to defend and preserve these spaces.”

For more about Duane Doyle and the Breaking Boundaries project see HERE.

Doing, not just talking: a celebration of People’s Park in Reconciliation Week

Things are changing at People’s Park