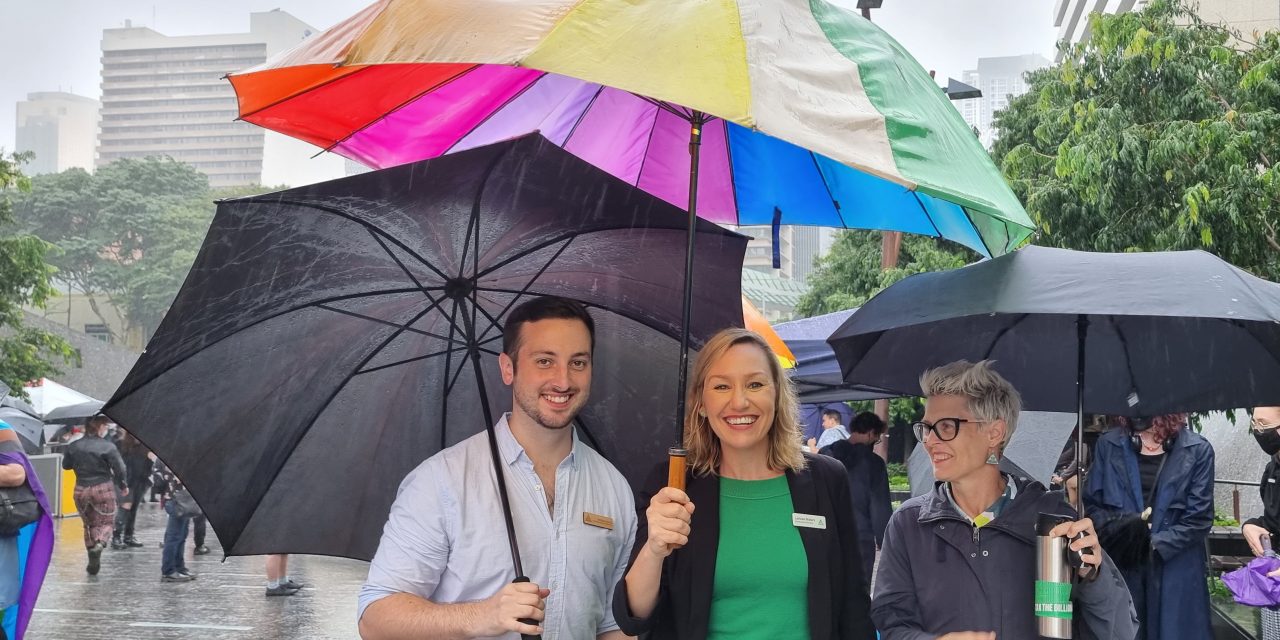 The Westender usually focuses on Griffith but interviewed[i] Stephen Bates during the election campaign for two reasons. First, given how well The Greens had done in Brisbane in 2019, it was somewhat surprising that the mainstream media were much more focused on what was happening across the river. And the LGBTQI vote was of interest, given two openly gay men were going head-to-head in an electorate with a high LGBTQI population. See the story at the link below.

It turned out to be a tight contest between Labor and the Greens, and a full week passed before we knew that Mr Bates had won. At 29, Stephen Bates, who has only visited Canberra once, will be one of the youngest members of the House of Representatives in the new parliament.

When I spoke with him mid-campaign, Mr Bates was generous with his time and candid in his responses.

“I hate it when politicians and candidates dodge things and refuse to answer, and I always told myself I would not do that,” he said.

Mr Bates said he started his journey with the Greens as a volunteer on Council and State election campaigns in 2020.

“I took a bit of annual leave from work to do more volunteering. Some people go on holiday; I decided to do volunteering for a political party. I went back to work after that, and I wasn’t 100 per cent happy in my job. That was my moment. I thought, “I think I found where I’m supposed to be: being out in the community, talking to people, showing people that politics can be better than it currently is, that you don’t have to settle.”

“I wanted to elevate people’s voices and be a voice for the community – for lack of a better phrase, to get in there and keep the bastards honest.”

Senator Larissa Waters was often by Mr Bates’ side during the campaign and has been a guide and mentor.

“Someone that I really like and have always really liked, and meeting them in person hasn’t changed my opinion of them, is Senator Larissa Waters. Just watching her be a firebrand for close to a decade now. She has given me lots of lessons, pointers and tips and I feel like she’s taken me under her wing and been a good mentor for me.”

Thank you to every single person who made this win possible.
Hundreds of volunteers donated thousands of hours of their lives in hope of a better future.

It takes a village to win an election and I am honoured and humbled to have been elected as the next Member for Brisbane.

Like many candidates Mr Bates, who works in retail, was campaigning and working full time in the lead up to the election but was able to take some annual leave when the campaign got going in earnest.

“Something I have noticed is that being a candidate is a bit of privilege. You need to have some form of financial security behind you, otherwise you’re not going to be able to do this, or do it at the capacity you should.”

I was surprised that mainstream media had only just started to talk about Brisbane once the election was called.

“Yes, and I don’t know the answer because the numbers haven’t changed.”

“Our door knocking and all the conversations we’d been having were telling us that the shift was already happening, and people were keen for change. They were sick of the status quo. Climate change was the biggest issue. So, we knew this was happening. All of a sudden when the election was called, the media saw our seat and thought, “oh, wait a minute, what’s happening on the north side of the river?” Yet in the last election, we were the only “major party”, of the three that got a swing towards us. All of a sudden they’re paying attention.”

The Brisbane electorate is diverse, ranging from higher incomes in the Ascot, Clayfield, and Hendra areas, to lower socioeconomic areas like the Valley, and traditional working-class areas in Gordon Park and Stafford.

“Brisbane has the youngest demographic of all the electorates in the country. We have the greatest number of under 30s. We also have one of the highest turnovers of voters because 52 per cent of the electorate rents. So, it’s really a cross-section of the country with a wide array of income, gender diversity, renters, and age ranges,” Mr Bates said.

Having Greens state member Michael Berkman in a neighbouring state electorate gave his campaign legitimacy, Mr Bates said, demonstrating to voters that The Greens can win. This, of course, was also a factor in Griffith and Ryan, and with their bolstered numbers, The Greens have put the LNP’s Brisbane City Council regime and the Labor State Government on notice.

“It also helped in the 2020 state election that the division of Cooper, which sits within Brisbane, had a 10% swing towards the Greens. We nearly won that seat. Those changes over the last decade have definitely helped.”

Mr Bates said that climate change was a key issue in his electorate, with The Greens’ policy to revive Australian based manufacturing resonating strongly with voters.

“I thought it would be 100 per cent renewable energy, but actually it is reviving manufacturing in order to achieve that. People like the idea of us becoming more of an economic powerhouse in the region and being able to manufacture wind farms and solar panels, batteries and all the renewable infrastructure in the country.”

Housing availability and affordability, which impacts the high population of renters in Brisbane, and the more localised issue of aircraft noise were also critical concerns for voters. The latter issue, and the Greens’ promise of an airport curfew, has raised high exceptions in the electorates of Ryan, Griffith and Brisbane, and the new Greens members will be keen to get their legislation through parliament. This may the first real challenge for the newly elected member.

I asked whether Mr Bates considers the Tax on Billionaires the most critical Greens’ policy to get through parliament, given so many of their other policies are contingent on the funds it will raise. While he believes the tax is important, Mr Bates said more significant policies are getting corporate money out of politics, having a corruption watchdog, and introducing a code of conduct for politicians.

“I think the influence of money in politics is why we’re in the situation that we’re in. We’ve got a scenario where companies will donate millions of dollars to both the major parties because it guarantees them influence regardless of who wins. They are betting on both houses. That investment is reflected in policies that substantially benefit them and their bottom line at the expense of everyone else.”

“The reason we have positioned [The Billionaires tax] at six per cent is because we think Labor can work with that. It’s not completely out of the realms of possibility.”

Mr Bates was not surprised that Brisbane did not attract independent candidates in the way that inner-city electorates in other states have done.

“The Greens have always performed well in Brisbane. I think it’s because we’ve been campaigning here for decades now – relentlessly campaigning to show people that there is an alternative. We were already seen as the alternative.”

Being a gay candidate had been a lot easier than he had thought it was going to be. He even had a bit of fun with it, advertising on  gay dating app, Gridr and in LGBTQI publications.

“There’s always that underlying fear of homophobia. But this campaign has been refreshing in that it has not happened to me.”

“When I was younger I didn’t really have anyone to look to in the public sphere, so I always promised myself if I ever got into this scenario that I would “gay it up”, because you never know who that helps.”

Having met him and having read his comments since his election, I suspect Mr Bates will remain grounded and engaged with his electorate. In a recent interview with the ABC, Mr Bates said he still has to work three more shifts in his retail job this week before focusing on his new parliamentary role.

[i] This is an edited version of the Westender’s interview with Stephen Bates on 3 May.

Could the LGBTQI vote make a difference in Brisbane?