Could the LGBTQI vote make a difference in Brisbane? 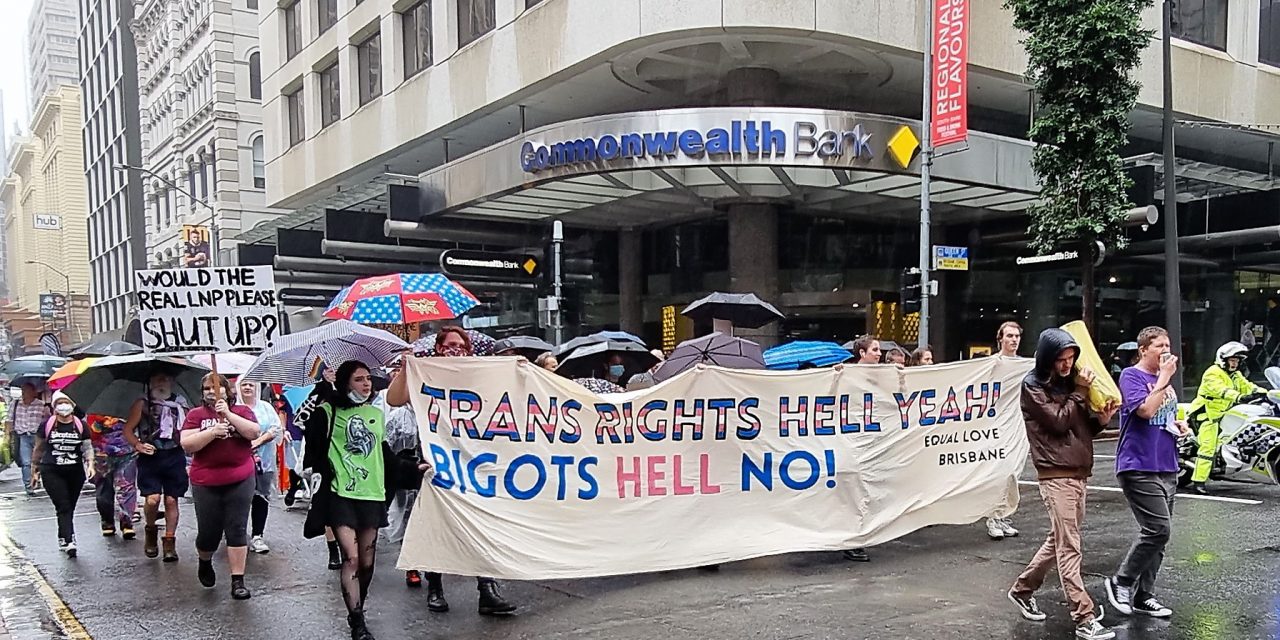 Brisbane’s sitting member, the LNP’s Trevor Evans, a former Chief of Staff for Peter Dutton, is openly gay. His Greens opponent, Stephen Bates is also openly gay. The electorate stretches along the northern side of the Brisbane River from New Farm to Hamilton. It includes the CBD and Fortitude Valley, home to many gay businesses and venues, and centre for the annual Pride March, which makes its way down Brunswick Street to New Farm Park. It has socially diverse, mobile and young demographic.

The battle for Brisbane is tight, with both the Greens and Labor talking up prospects of defeating the sitting member. Trevor Evans was first elected to the seat in 2016 and re-elected in 2019, but in a scenario similar to that playing out across the river in Griffith, support for the Greens has doubled since 2007. Oddly though, the turn to the Greens in Brisbane has garnered less media attention, at least until recently, despite The Greens nearly reaching second place on primary votes in 2019.

Citipointe Christian College provided Brisbane with a stark illustration of how the religious discrimination bill might play out in practice when parents were asked to sign an enrolment contract that described homosexuality as a sin and compared it to bestiality and pedophilia.

The school also sent teachers employment contracts that threatened them with the sack for being openly gay. Only after community backlash and the intervention of the State Education Minister, Grace Grace, did the school withdraw the contract. Its principal later resigned.

Trevor Evans was a vocal supporter of the Same-Sex [Marriage Amendment] Bill, and in January 2021, he officially announced his engagement to his partner. But he appears to have gone to ground when it comes to the religious discrimination bill.

The Government’s religious discrimination bill passed through Parliament’s lower house, with amendments, on 10 February after an all-night debate. Amendments[i], supported by Labor, members of the crossbench, and five dissenting Coalition MPs, extended stronger protections to LGBTQI students. However, the amended Bill was withdrawn by the Morrison government before it could be debated in the Senate.

Trevor Evans did not cross the floor with his five dissenting colleagues to support amendments designed to protect gay and transgender students. Mr Bates, who stayed home from work to watch the debate, said “It was very personal: watching my sitting member vote against all the amendments to protect transgender kids, queer kids’ and workers was disappointing”.

“I wrote to him, asking why he didn’t cross the floor and voted against all these amendments. He has never replied.”

During this current election campaign, Prime Minister Scott Morrison announced his intention, if re-elected, to again bring forward his religious discrimination bill. He has also controversially endorsed a proposed private member’s Bill by the Tasmanian Senator Claire Chandler’s, to ban transgender women from participating in female sport, and doubled down in his defence of Katrenine Deves, his pick for Warringah candidate, for her anti-transgender rhetoric.

The five Coalition backbenchers who crossed the floor to support amendments in February have indicated their preparedness to cross the floor again. Yet, Mr Evans has stayed silent. Requests to his office from the Westender for comment have gone unanswered, as have requests to his Labor opponent, Madonna Jarrett.

Labor has said they will seek to legislate a religious discrimination act but oppose measures that enable schools to expel gay and transgender students. But Mr Bates and The Greens want Labor to drop all support for the Bill.

Dr Sharon Dane coordinator of research from Just Equal said her organisation has approached all parties and has not yet received any information from Labor on their current policy.

“Labor definitely stood in and said that they would address gay students, in terms of their expulsion from school.”

“We do know that the Liberal Party obviously is not proposing to protect students, except for those MP’s who crossed the floor last time.”

Dr Dane said they find it particularly frustrating that gay MPs like Mr Evans, Angie Bell, and Tim Wilson “put their careers first, over the lives and well-being of people in LGBTQI communities.”

Jane Hopkins, President of PFLAG in Brisbane, said her organisation is disappointed and confused by Mr Evans’ support for the Bill.

“I just don’t understand how a person in his position does not know what this could lead to. The religious discrimination Bill will allow people to marginalise and vilify others in the name of religion. I don’t understand why he wouldn’t want to protect not only himself, but also other people within the LGBTQI community.”

Ms Hopkins said she has not been able to talk with Trevor Evans and was disappointed that he chose not to attend a forum organised by the Anglican Archbishop at St John’s Cathedral.

“The archbishop invited approximately fifteen groups from the community, and the three major candidates, Madonna Jarret, Steven Bates, and Trevor Evans. It was disappointing that Trevor didn’t turn up for the event.”

Ms Hopkins was also disappointed that a pride business forum held at the Brunswick Hotel on 29 April, which Mr Evans did attend, did not include a question-and-answer session from the floor.

“If you’re in public office, you should be able to be asked questions that are concerning your voters.”

On Sunday, 15 May, a small crowd braved steady rain to join a protest and march in Brisbane CBD organised by Equal Love. There was palpable anger in the crowd that transgender people, are again political collateral at election time.

“The best estimate of how many of us there are ranges from 0.5% to 1.2% of the population. So, you’ll see how dangerous and scary we are to the likes of Scomo, when they’ve got to use us in their campaign time and again.”

“We have a Prime Minister who has a pet project of suicide prevention. I spent the last two years on his expert advisory group. Our Prime Minister knows how oppressed we are: I have made sure of that. We are vilified in our houses and our workplaces, and in the streets. We are suffering. We are said to be the most at risk of suicide.”

Mr Forbes said he wants to see politicians with the backbone to stand up for the transgender community.

Greens candidate Stephen Bates said that action on climate is “far and away the biggest issue for the electorate in Brisbane” and aircraft noise is biting in some suburbs, but he thinks the religious discrimination bill has also been resonating.

PFLAG’s Jane Hopkins said it is hard to know whether the issue will translate into votes in Brisbane.

“No one knows how this election is going to go. But I do certainly know that in the circles I mix in, LGBTQI groups, and parents and families, the Bill looks terrifying to all of us. And we don’t trust the Government, we don’t trust Morrison.”

“It’s a horrible position to be in, just holding your breath and trusting that people will vote against it. I hope that people look at it and are educated enough about it to understand what kinds of damage and hurt it is going to cause.”

“When I was elected to Parliament in 2016, I became Queensland’s first gay parliamentarian, and I’ve been working hard to fight for Brisbane’s LGBTIQ+ community since,” he wrote.

Mr Evans talked up his efforts in 2017 for marriage equality, outlined his steps to get HIV drugs on the PBS, and interestingly, his support for a program for gender diverse youth.

In the meantime, Stephen Bates has turned to a gay hook-up site and other LGBTI platforms to boost his profile with the LGBTQI community.

In a recent interview with QNews, Mr Bates said, “… we need progressive queer representation in parliament, and that is why I am running for the seat of Brisbane this federal election. I am proud of my sexuality and will fight against legislation that actively discriminates against LGBTQIA+ people.”

If you are confused about what happened in Parliament on 10 February, here is an explainer from Pedestrian TV, https://www.pedestrian.tv/news/religious-discrimination-bill-explainer/