Changing slums In Bangladesh one stove at a time 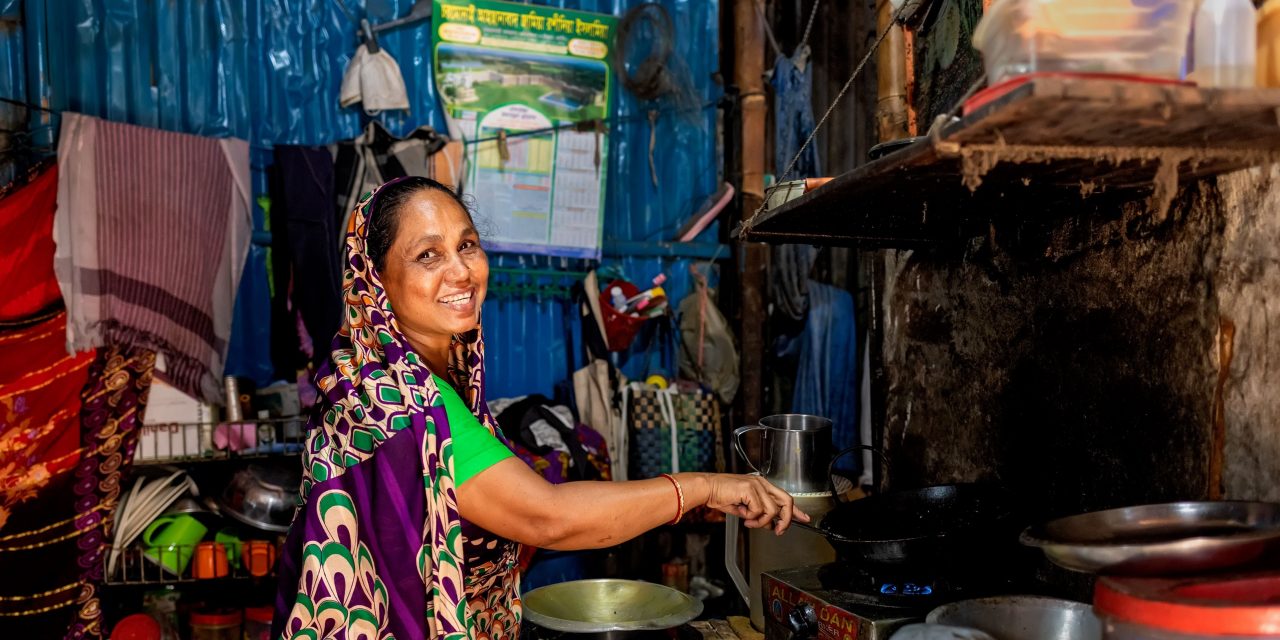 An energetic group of West Enders has set up a successful international charity in recent months, which is doing hugely beneficial work in the slums of Bangladesh. A registered charity, Fuel for Change: Dhaka Inc (F4C), has set about eliminating firewood cooking in the slums of Dhaka, the capital of Bangladesh. Over 6 million people live in slums in Dhaka, representing more than one million households. At least two-thirds of those homes rely on firewood for cooking; most construction site waste includes discarded bamboo scaffolding. Secretary of F4C, Wendy Truer, a West End resident for 30 years, says that smoke from the firewood stoves is highly damaging to the health of women in the slums and their children.

Further, women can spend four to six hours a day sourcing firewood, building and maintaining the fire and cooking. This prevents them from other productive activities such as earning an income or helping children with their studies.  In reality, the smoke in houses pervades dwellings and people’s clothes, prevents children’s study, and severely impacts people’s dignity. Smelling of wood smoke is a stigma associated with poverty.

Wendy spent time in a slum in Dhaka in 2019 with Dr Mark Jones, another West Ender, assisting in the research for Mark’s PhD in global energy justice. Subsequently, Mark, Wendy and Mark’s wife, Claire Hanratty, spent many months contemplating how they could best practically help the people of Dhaka’s slums.

In early 2021, F4C was born with Mark as Chair, Wendy as Secretary and Claire as Treasurer. Karen Perkins (Deputy Chair) and Kate McKeon (Assistant Treasurer), also of West End, soon joined. After several months of negotiating the demanding registration processes for a new charity, operations began in mid-2021. The charity has three other volunteer Brisbane Board members, Andrew Jones, Dr Chris Landorf and Amy Henderson. While in Dhaka, Wendy and Mark engaged their translator Younus Iqbal to act as the in-country representative for F4C.

“A new stove, regulator and gas bottle costs an individual $50, but F4C can buy in bulk for between $40 and $45. Each recipient contributes $15 and our donors pay the balance. The $5 to $10 difference covers Younus’s wage and various fees and insurances. Our overheads are extremely low, making every donation highly effective”.

Assistant Treasurer Kate tells us that the average monthly cost of firewood in the slums is $15, and gas is about the same. Everyone wants to cook with gas, but they just cannot afford the $50 up-front cost. That’s where F4C facilitates the leap forward to gas.

As explained by Mark, Younus moves door-to-door, giving the women two or three weeks’ notice that if they save $15, they will get a new gas stove. This empowers the women and helps them feel like this is not just charity. He returns in subsequent weeks and accompanies the women to the shop, which is in the slum, and purchases the stove with the woman’s $15 plus $30 from F4C’s donors. The empty cylinders can be exchanged with full gas cylinders when required. Karen, F4C’s Vice Chair, says that the whole social enterprise has been gratifying, especially seeing the photographs and receiving testimonials from the women. The following feedback from a woman called Sharma is typical:

“It has been a great help for me, a lot of advantages. I was always sick with the firewood. Getting this cylinder and gas stove, I was able to cook better. Also, I used to buy and carry a lot of firewood, but now I don’t need to. Now everything is less dirty and less detergent. And having no smoke and no heat makes me much better.”

Mark says that he is extremely proud of what the F4C team has achieved.

“We are just a group of West End locals who had an idea, and as it turns out, this highly targeted enterprise is hugely effective. We ask Aussies to donate $35 to buy a stove and full gas bottle. That $35, about what most of us spend on take-away coffee a week, absolutely transforms the life of a family in Bangladesh forever.”

The charity is working towards providing 1,000 families with stoves in 2021 and hopes to deliver far more in 2022.

If you would like to support F4C’s transformational stove deliveries, you can make a tax-deductible donation or buy a gift card through their website at fuel4change.org. It also helps spread the word if you follow us on social media – Facebook or Instagram.

Dr Mark Jones is an architect and an Industry Fellow at the University of Queensland School of Architecture. He is a founding member of F4C.