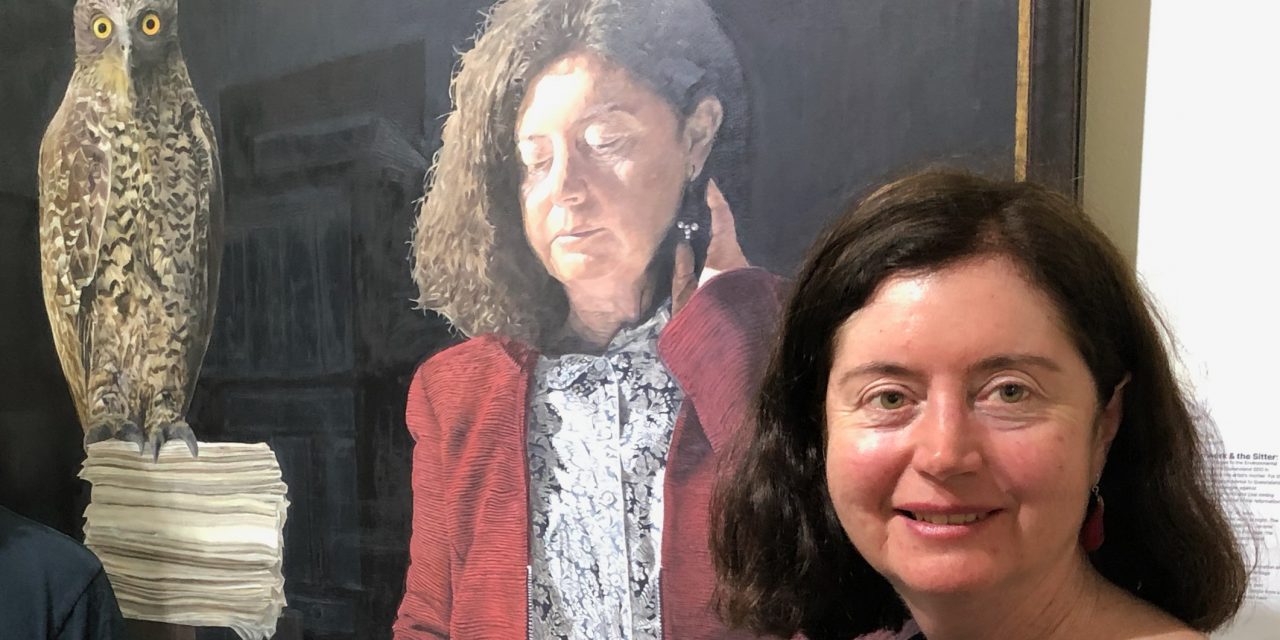 To the acclaim of environmental supporters and her friends, in January, Jo-Anne (Jo) Bragg, General Counsel at the Environmental Defenders Office, was awarded a medal in the General Division of the Order of Australia for her services to environmental law.

With COVID and the floods, it has taken a while for Jo’s friends and community to gather together to celebrate this honour with her, but we were able to do so last Sunday at Cranbrook Place in Orleigh Park. See the gallery of images below.

Jo’s journey to environmental law started in the leafy suburbs of Northern Sydney, where she attended what she describes as good quality public schools. She said she was something of a swat but also good at sport, being both a netballer at rep level and part of a champion debating team. That, and her family’s love of nature were influential factors in Jo’s eventual move into environmental law.

After finishing school, Jo studied law at Sydney University. She thinks others considered she had the aptitude for the law because of her academic achievements and debating skills.

“I kind of fell into it …. I didn’t really know what it was. I’d done work experience at a lawyer’s office and noticed that people seem to be drowning in paper, but I nonetheless thought it seemed like something I should have a go at.”

“I didn’t really appreciate all the possible careers that could flow, apart from being a barrister.”

After graduating, Jo first worked in the commercial law firm Minter Ellison in Sydney, but it wasn’t long before she was looking for something that was a better fit with her growing interest in the environment.

As a student and young lawyer, Jo joined several campaigns in New South Wales in the late 1980s, giving her, her first exposure to environmental law.

“My entry to the conservation movement was the campaign to save the southeast forests in New South Wales.”

“I was a volunteer with the Forest Action Group. We saw the logging and destruction of the southeast forests, literally going overseas as wood chips to be disposable paper products. So, my part-time role was doing public information stalls to protest against that logging.

“As I became qualified, I was a volunteer lawyer in my spare time on the weekends, interviewing protesters, as part of providing volunteer legal advice.”

During that time, Jo met fellow activist and soon to be life-partner, Gary.

“Jo and I’d had a chat in Sydney and said, “What are we doing?” We’ve got our corporate law jobs and we’ve got our industrial chemistry jobs. What are we doing with our lives? And we decided to change our careers, to both have the environment versions of our careers. And so to get the environment version of Jo’s corporate law job, we scanned the newspapers, and there was an advertisement, a three-day part-time job in Brisbane, and we threw in our careers and haven’t looked back,” Gary said on Sunday.

Queensland and the EDO

So, in the spirit of adventure that has defined her career, in 1992, Jo left her secure commercial law job and came to Queensland after accepting a job at the then-fledgling Environmental Defender’s Office.

I asked Jo if she came was as the CEO or a lawyer.

“Well, it was everything, because I was the only lawyer. We had a part time administrator, and I had the part-time. four day a week position at the EDO. And so, I had to do everything. But as always, there were some wonderful volunteer lawyers who gave their time, so I wasn’t completely responsible for the legal work.”

On arriving in Brisbane, Jo and Gary asked for advice on the best places to live and were told, West End and Highgate Hill. So they settled on Highgate Hill and are still there today.

Based in Brisbane CBD, the EDO had a small office shared with the Wildlife Preservation Society of Queensland.

“It was a tiny cupboard of an office.”

Jo later oversaw the move of the EDO to West End because at that time, if not now, the rents were cheaper.

Regular funding has been an ongoing issue for the EDOs. When Jo started in 1992, the QLD EDO had modest state government funding secured by Tony Woodyatt, the first Director of LawRight/QPILCH. In 1995, all the EDOs gained additional Federal funding, mainly through the advocacy of Brisbane-based environmental lawyer Maria Comino.

“So that gave us a consistent base. But we’re really talking about enough to afford a handful of people, really.”

The emerging public focus on climate change brought with it the transformation of the Queensland office.

“Various environmentalists and conservationists realised we had to gear up and get more legal support. So from about 2009 onwards, with support from other individuals, we transformed the EDO from relying on a modest amount of government funding to being  a more -engaged public organisation, where we’d call on supporters to financially contribute.”

“I think one of the most exciting days, if I can pick a day, was in December 2003. Because in December 2003, the EDO won a case called the Nathan Dam Case in the federal court,” Jo said.

The case was influential in changing how environmental impacts are assessed under federal legislation.

“On that same day, some law reform we’d worked on with Dr. Carol Booth commenced, giving community rights in the Nature Conservation Act.”

The reform enabled community groups or individuals to take action if the Nature Conservation Act was breached.

“Others involved as clients or as staff in that win included, Imogen Zethoven, Larissa Waters, who was a staff member, and Dr. Chris McGrath, who was one of our barristers.”

“More recently, it was absolutely wonderful, when for the first time the EDO went to the High Court, and we were successful for the Oakey Coal Action Alliance against New Acland Coal. That was last year and it’s the first time a community group has ever won against a mining company in the highest court of the land. My colleagues, Sean Ryan and Andrew Kwan, were instrumental in that win.”

As a West End local, in her private capacity, Jo has championed causes and supported community groups. She has been an advocate for active and sustainable transport and was one of the West End Community Association founders.

“That really grew out of concerns about overdevelopment in West End and new planning schemes being proposed, which were contrary to the majority wishes of the local community.”

“It disappoints me that issues of planning and sustainable transport at the local level, and issues about environmental protection and sustainability, at the national scale, are not fixed yet. Its disappointing we haven’t made more progress despite a number of hardcore wins.”

Swim for the Reef is another community initiative that combines Jo’s private interests and professional concerns. The first event was held at Musgrave Pool in 2016.

“It began at a time when Queensland community, the EDO, and the international community were gravely concerned about what was happening to the Great Barrier Reef. And so it came together: people’s concern about the Reef and need to raise funds, and my keenness to swim at the local pool, which was always a very friendly venue.”

The Swim for the Reef events went from raising an impressive $30,000 in the first-year gross to raising over $70,000 in its fourth year. COVID has put a temporary stop to the fundraiser, but Jo thinks there is a lot of enthusiasm amongst EDO supporters and local swimmers to continue with the swims.

See the Westender’s report on the 2016 Swim for the Reef here – https://westender.com.au/over-100-swimmers-make-a-splash-for-swimforthereef/

The EDO has been something of a proving ground for local political aspirants. Two successful political candidates have emerged from the QLD EDO, Larissa Waters, who is a Greens Senator for Queensland, and Michael Berkman, State Member for Maiwar.

“Protecting the environment is important for everyone, whether you’re a rural land holder in the interior of Queensland or on the coast, whether you’re involved in agricultural production, or you want to protect wildlife. So, I’d love it, if all our political parties had strong and effective policies to address climate change and protect resources like water. The EDO is very happy to meet and deal with all political parties. We’re not politically aligned. But it just happens a few of our former staff are now in politics. And we advocate to them as we advocate to all the other important decision makers.”

Jo has been a Green Party candidate twice, once for Brisbane Lord Mayor and once for the seat of South Brisbane. She doesn’t think she will ever have another tilt at politics but says the experience taught her a lot.

“It was good to have a go, and it certainly gave me more sophisticated understanding of how important it is to convince our politicians to protect the environment and community rights. But no, I don’t see myself doing that again in the near future.”

Hopes for the Future

Jo hopes that through good communication and awareness of the issues facing us, we will see better public participation and more robust and better environmental laws, and through compliance with those laws, climate change will be addressed more effectively.

“I’m very impressed by the skills and sophistication of the young lawyers and local young people I meet. My fears and concerns are that we need strong anti-corruption legislation federally. We need a national anti-corruption commission with expansive powers. And we need strong laws limiting political donations to have a better and more effective democracy.

Jo sustains her hope through swimming with friends, bush-walking, bird watching, and strong relations and shared values with her colleagues at the EDO.

“These all help me manage the negative mental impacts of climate change and all the negativity of those impacts.”

Galley of images from Jo’s celebrations at Orleigh Park on Sunday 20 March – click on image for details.